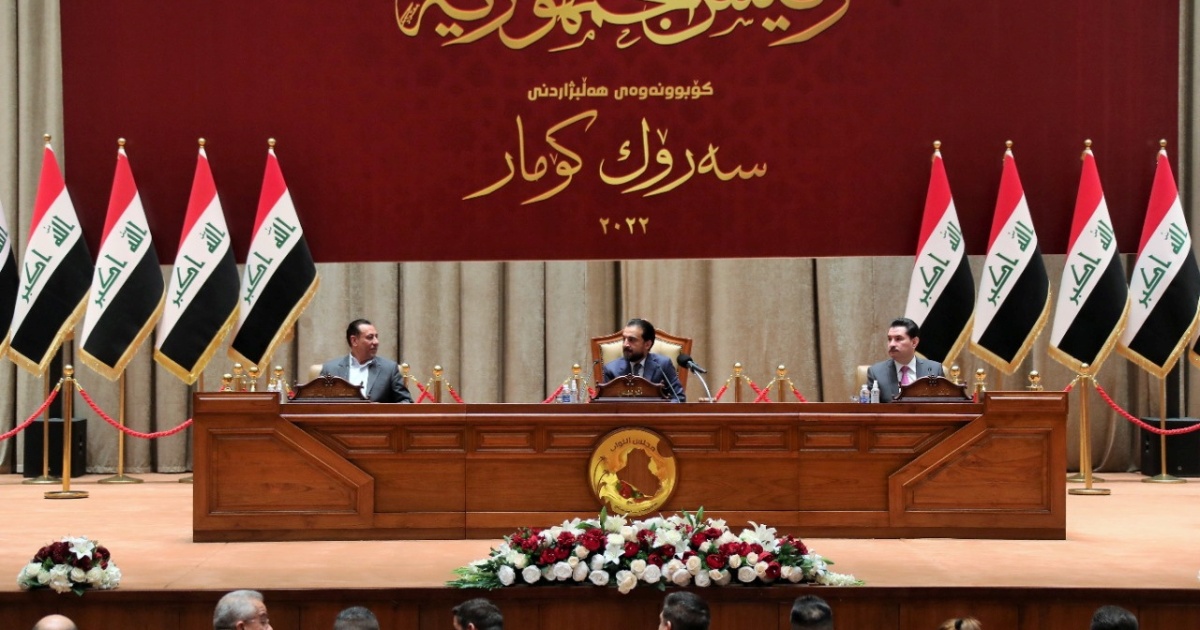 Iraq’s Sadrists, the biggest grouping in parliament, have been unable to form a government since October’s elections.

Iraqis are still waiting for the country’s politicians to form a government, almost eight months since parliamentary elections took place in the country, with political elites unable to find an agreement.

Popular Shia religious leader Muqtada al-Sadr, whose Sadrist Movement emerged as the biggest party in the October elections with 73 out of 329 seats, has been working to try to put together a coalition, but is still unable to do so.

In al-Sadr’s way is a rival Iranian-backed bloc, the Coordination Framework Alliance (CFA), which is the political umbrella for the largely Shia Popular Mobilisation Forces militia.

The CFA has boycotted parliamentary votes for a new president a number of times, on the basis that an agreement with the Sadrists that ensures the CFA will have a say in who is nominated for the presidency was needed first.

This led to a decision by al-Sadr on May 4 to ask independent MPs to join his alliance, which he called Saving the Homeland, after a 40-day ultimatum he offered the CFA to form a government expired.

But to form a government, a two-thirds majority – or 220 members – has to first vote for the country’s president, which has not happened due to parliamentarians boycotting voting sessions.

The Saving the Homeland alliance has agreed to nominate the interior minister of Iraq’s Kurdistan Regional Government, Rebar Ahmed, for the presidency, while the KDP’s rival, the Patriotic Union of Kurdistan, has stuck to its candidate Barham Saleh, the current president.

A number of ministers in the caretaker government have also indicated that they would like to hold on to their positions, which is also contributing to the political inertia.

“The major political blocs have the ability to find a solution to the deadlock, but there is no serious will to do so,” said Ali al-Baider, an Iraqi political analyst. “The option of dissolving the parliament is not serious, as many parliamentarians might not be able to win the seats they did in the last election.”

Calls have been made by some politicians to therefore dissolve parliament and hold new elections. Constitutionally, a president should have been elected 30 days after the election of the speaker of parliament in January.

“As always, Iraqis are the big losers of the political process and the governments that have come since the US invasion of Iraq in 2003,” added al-Baider. “We [Iraqis] are still paying the bill of the current parliamentary failure, and we are entering into an unknown future.”

Al-Baider believes that al-Sadr has the ability to get the parliament out of the current impasse.

“It is not logical to solve one problem [deadlock] by creating another problem [dissolving the parliament],” al-Baider said. “Even if the parliament were dissolved, and a new one elected, what is the guarantee that the next parliament will not have the same problem?”

That disappointment in Iraq’s current crop of politicians is reflected by the United Nations.

Speaking on May 17 to the UN Security Council, the special representative of the UN secretary-general for Iraq, Jeanine Hennis-Plasschaert, said Iraqis “continue to wait for a political class that, instead of being content with stale power battles … will roll up its sleeves to make headway on Iraq’s long list of outstanding domestic priorities”.

Nisan al-Zayer, an independent MP, has been involved in the ongoing government negotiations.

She told Al Jazeera that the only real solution currently was some sort of deal between the established political elites.

“Dissolving the parliament was an attempt to bring the main political forces, as well as the independent MPs, to the negotiation table,” said al-Zayer. “However, that step is not realistic as the big players would be the main losers.”

Al-Zayer listed a number of potential outcomes, including al-Sadr finally agreeing to a deal with the CFA, or an agreement between the two main Kurdish powers, the KDP and the PUK, that allows them both to back a single presidential candidate, who is then put forward by either the Sadrists or the CFA.

“Any scenario is possible,” said al-Zayer. “There is always the potential for surprises at any time.”

With Iraq’s biggest parties unable to agree on a way out from the current political freeze, smaller political groupings find themselves in a more important position.

Abdulamir al-Mayahi is the leader of one such alliance, the National Contract, which has four seats in parliament.

He told Al Jazeera that politicians needed to put the Iraqi people first.

“Political elites should take into consideration the interests of the people ahead of their own interests,” al-Mayahi said.

Iraq has witnessed multiple protests over the past few years, as young people in particular decry corruption, poverty, and the way the country has been run.

There is always the potential that those protests could start again.

“Not forming the government means no budget to provide jobs, infrastructure services, and other things,” said al-Mayahi. “The summer is coming; water and electricity shortages will start once again unless there’s a new government to do something about it.”