Johnson’s staff knew he had a crush on me, says Jennifer Arcuri

The US businesswoman Jennifer Arcuri has claimed that officials in Boris Johnson’s office knew he had “crush” on her when he was mayor of London.

Arcuri also claimed that the mayor was aware she going on international trade missions approved by his promotional agency, London & Partners (L&P), despite claims from Johnson’s lawyers that he was not expecting her to attend the trips.

Giving evidence to members of the London Assembly via video link, Arcuri repeatedly said that the grants and access to L&P trips she gained between 2013 and 2014 had no connection to her friendship with the mayor.

Johnson made no mention of Arcuri in his declaration of interest as mayor, and when news of their alleged affair broke in 2019, he said there was no relationship to declare.

Arcuri’s evidence to the Assembly oversight committee suggested that the interest should have been declared.

Asked if the mayor’s office aware of this relationship, she said: “People knew that there was an interest of the mayor in me and that he had somewhat of a crush on me when we went to events. Everyone could see the dramatic difference of this man when I entered the room. People kind of assumed what they wanted. But there was never any discussion about any of this.”

Frequently referring to herself in third person she added: “They assumed whatever they wanted, it didn’t change the fact that Jennifer Arcuri was the most annoying, perseverant hustler. Even when they said no, I didn’t listen.”

The hearing was focused on lessons that could be learned for the future, as the committee has been advised it cannot investigate the conduct of former mayors.

When Arcuri was still a MBA student at London, she persuaded Johnson to launch her tech startup Innotech in April 2012 and he went on to speak at three more of the company’s events. She also secured £11,500 in sponsorship from L&P for two of these events and secured a place on L&P trade missions led by Johnson to the Far East, New York and Israel, despite initially being refused places and not meeting the agency’s criteria for a place.

Arcuri told the committee: “My relationship with the mayor or my non-relationship had really no bearing on my complete pursuit of London and my ability to build a business.” She added: “When you’re hustling something from nothing, especially with clocks ticking with me getting a visa, I have to be everywhere, find everyone, interested in London because ultimately that helps my events.”

Last year the Independent Office for Police Conduct (IOPC) decided against launching a criminal investigation into Johnson’s conduct surrounding Arcuri despite finding evidence that officials were influenced by the close relationship between the pair. 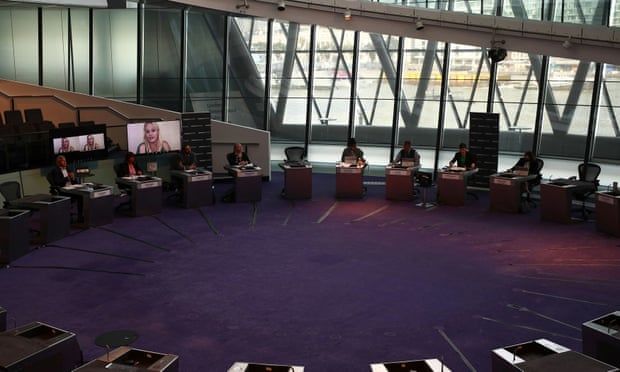 The video evidence session at City Hall in London.

Lawyers for Johnson had told the IOPC that as mayor he was unaware that she was due to attend trade missions that he led. “If and when Ms Arcuri did attend any such events, our client was not previously expecting her to attend,” they said in an email.

Arcuri was asked if she told Johnson she was due to attend the trade missions. She said: “Yes. With New York I remember calling him specifically saying, ‘Look, you can fake it everywhere else, but they’ll eat you alive in New York. You can’t fake it.’

“The other discussion was before Tel Aviv, where I made sure to give him a mouthful about never connecting to public wifi.”

She added: “He wasn’t really a fan of technology at that time. I was [asking him] do you have a private VPN? Have you set up two-factor authentication? Don’t connect to free wifi. Has anyone trained you on any of this? I mean, those were the discussions on trade missions.

“He would oftentimes ask, ‘How was the trade mission, was it beneficial for you? And I would say, ‘Yes all is well.’ There would never be any kind discussion beyond that.”

Arcuri claimed that at one stage she was in the offices of L&P every other day. She also said she dealt with senior officials in Johnson’s office including Eddie Lister, then deputy mayor for policing, and Will Walden, the mayor’s head of communications.

She recalled that there was rumour at the time of the trip to Singapore and Malaysia in November 2014 that news of her relationship with Johnson was about to appear in the press. She said: “Maybe the day before the Malaysia trip, there was some talk of journalists seeding a story at City Hall, where there was going to be as some kind revelation of a relationship.”

Later, at the high commissioner’’s house in Singapore, she said she asked Walden if the story was going to run. “He said, don’t worry about it,” she said.

She added: “When the mayor did show up at the events I stayed back. This was not why I was there. I didn’t want to ask his permission.”