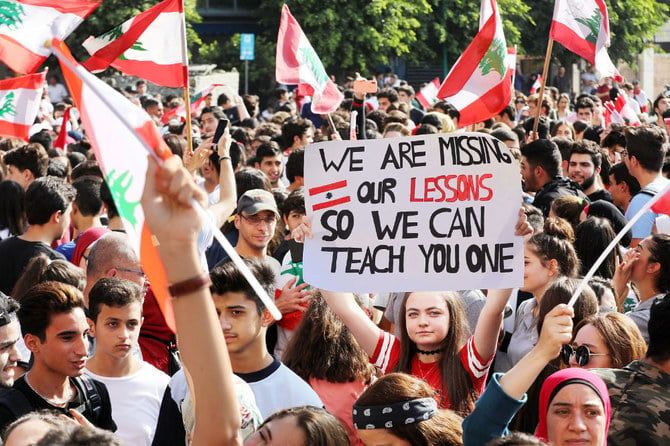 A recent courtroom drama in which a judge offered to pay the bail amounts for two destitute brothers, who had been arrested in a financial dispute, has served to highlight the impact of Lebanon’s economic crisis on children.
The arrested duo, who collect and sell tin cans and scrap from streets and landfill for a living, had been detained for a month following a row.

Dany Zeeny, the investigating judge, helped the minors and ordered their release from an Akkar police station in the far north of Lebanon.

Many poor people across Lebanon have recently started collecting scraps of metal, which they sell on for small amounts to provide for their families.

The brothers appeared before Zeeny in the presence of a court-appointed attorney.

The boys’ case shows how the protection of children is no longer on Lebanon’s list of priorities, although the country signed the Convention on the Rights of the Child more than 30 years ago.

The number of beggars, including children, has been significantly increasing.

Interior Minister Bassam Mawlawi said the government was addressing the issue, and added that there are plans to set up a juvenile rehabilitation center.

Once established, the center will solely house juveniles, and he said there will be no minors in the central prison for adults in Roumieh.

The UN official took part in a meeting held at the government headquarters in Beirut, after the organization expressed concern about the growing threat to the well-being and safety of children in Lebanon.

According to UNICEF, the harsh conditions in the country have led to a slowing down in the progress that it was making toward securing children’s rights, as defined in the convention.

This was reflected in their reduction in access to healthcare, protection, education, rest, play and recreation, which had resulted in dire effects on children, particularly those with disabilities.

The reports presented by ministers during the meeting showed pre-existing crises — some of which were exacerbated by economic collapse — in addition to new concerns related to intractable political, economic, and legal problems.

The justice minister said that although successive governments had prepared draft laws, and discussed the need to establish centers or correctional facilities for the rehabilitation of children, parliament was yet to vote on or approve any of the moves.

Hajjar said the child protection program was hard to implement in light of the presence of a large number of Syrian and Palestinian refugees.

He added that children lived in harsh conditions in camps, with the majority not attending school which exposed them to even more problems.

Hajjar urged the international community to coordinate with the relevant ministries to help find appropriate solutions.

Hyperinflation in the face of the collapse of the Lebanese currency has resulted in families struggling to survive.

UNICEF says some families have tried to cope by cutting back on food, restricting healthcare and education and, in many cases, forcing children into work. This had been the case even prior to 2019.

The social protection system in Lebanon has suffered from large gaps in coverage and funding.

In addition, there is no national scholarship program for children, nor general allowances for children with disabilities.

New UNICEF findings have revealed the depth of the damage to the lives of children.

It said: “Children are exposed to an increased risk of abuse, exploitation, and violence, and they are prevented from accessing basic needs in order to survive, which will lead to physical, mental, psychological, and economic repercussions that will accompany them in the stages of adolescence and adulthood.

“The high level of stress and anxiety within the family causes health and psychological issues for children, and sometimes leads to violent situations within the family and to more dependence than before on harmful social and gender norms and practices.”

Majid said: “The protection of children should be met at the judicial, social, medical, and administrative levels.

“The goal is to activate a series of services to reach all children. Lebanon ought to invest in its children and the country’s future and present.

“The UN and UNICEF are fully prepared to provide all possible support to improve services provided to children and families, for the benefit of children.”
Add Comment