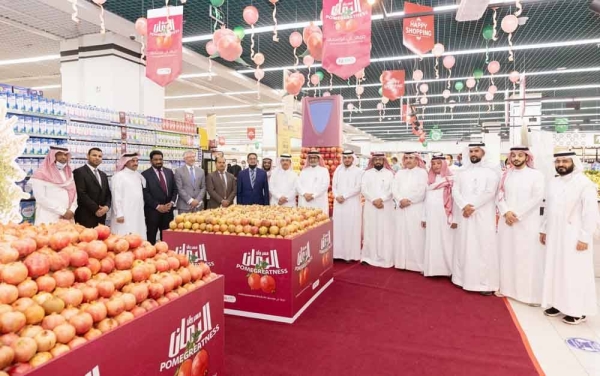 The region’s largest hypermarket chain, LuLu has reinforced its commitment to supporting local farmers and agricultural enterprise with the Pomegranate Festival across all its hypermarkets in Saudi Arabia.
The juicy fruit, sourced from two regions in Saudi Arabia — Qassim and Baha mainly, are part of the retail giant’s efforts to promote fresh and local produce. Thanks to its state-of-the-art logistics, warehousing and food sourcing team, which strengthened networks with local farmers and government agricultural organizations to find and showcase the best local food items grown in Saudi Arabia.

LuLu is the first and only retail chain in Saudi Arabia to promote local pomegranate directly from Saudi farms. The festival, which runs in the LuLu hypermarkets in Riyadh, Dammam and Jeddah began on Oct. 27 and continue until Nov. 2, 2021. It is an initiative in cooperation with the Ministry of Environment, Water and Agriculture’s (MEWA) “It’s Season” focus on seasonal agricultural produce.

“At LuLu, we believe in extending support to the local agricultural community and this puts our hypermarkets at the front of the “farm-to-table” movement,” said Shehim Mohammed, director of LuLu Hypermarkets Saudi Arabia.

“This is part of our corporate effort to promote food self-sufficiency and also the local farmers. We are looking forward to a long and fruitful association with MEWA to do this.”
Add Comment