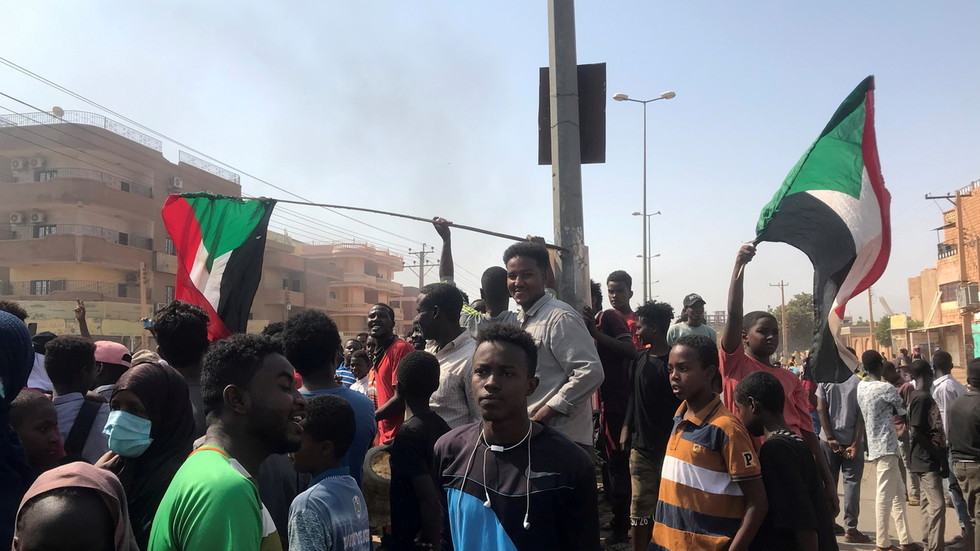 Major Sudanese tribe plans to end port blockade in support of military coup, as doctors and academics go on strike against it

The Beja tribe, which had been blockading Port Sudan since September, has said it will withdraw in support of the military, according to regional TV, while doctors and academics have vowed to strike against the coup.
On Monday afternoon, the Al-Hadath TV channel reported that Sudan’s Beja tribe had announced that it would end its blockade of Port Sudan, which has seen the country’s fuel, medicines and wheat supplies pushed to the limit.

According to the Saudi-based TV network, the tribe expressed support for a military takeover staged earlier in the day. The reports are yet to be confirmed by the authorities.

The tribe had been blocking roads around Port Sudan and forced Red Sea ports to close, after criticizing a lack of power within Sudan’s new political settlement and poor economic conditions.

The report came as the Sudanese Ministry of Information, which continued posting throughout the day after Prime Minister Abdalla Hamdok was arrested in a pre-dawn raid, said the country’s medical staff were going on strike.

“Sudan’s doctors declare general political strike in all Sudan hospitals except for emergencies and withdrawal from all military hospitals. Refusing the military coup,” a post read.

The ministry also said that Khartoum University professors had declared a civil disobedience protest and had called on others, in all professional and service institutions, to do the same and resist the coup.

A later post stated that all workers in federal and state ministries as well as civil service institutions had joined the strike, demanding that power be handed back to the civilian government.

In the early hours of Monday morning, Hamdok, along with other civilian ministers, was detained and reportedly moved to an undisclosed location after he refused to back a military coup.

In a subsequent statement, Abdel Fattah al-Burhan, the head of a sovereign council of military and civilian members which is running the country during its transition to democracy, declared a state of emergency and dissolved the government.

Burhan, himself an army officer, said that the military would oversee the remainder of Sudan’s transition to democracy and vowed to ensure that elections would take place in July 2023. The council of military and civilian members had been tasked with the difficult job of guiding

Sudan to elections in 2023, following the removal of long-time leader Omar al-Bashir in 2019.

Thousands have taken to the streets, making their anger known over the coup while blockading roads and clashing with troops, who reportedly fired some live rounds.
Add Comment