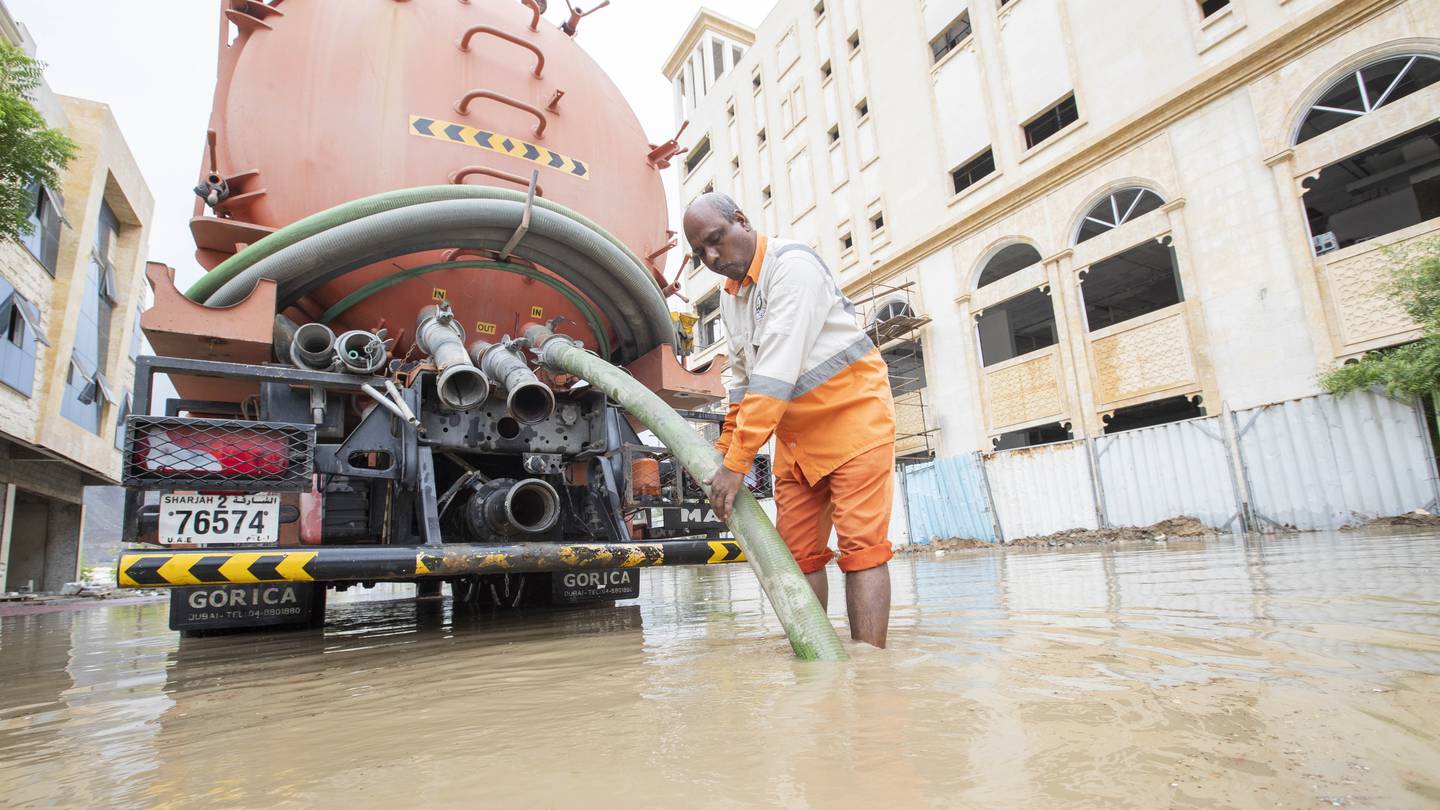 More rain is forecast for the UAE's east coast on Thursday after a deluge led to flooding across Fujairah, Ras Al Khaimah and Sharjah.

Weather charts showed rain and thunder from Ras Al Khaimah in the north to the Oman border in the south from 5am.

The weather front will move from east to west throughout the day, with thundery showers in Dubai around lunchtime, and with a chance of rain in Abu Dhabi.

The National Centre of Meteorology issued a safety alert to those in flood-hit areas of Sharjah and Fujairah.

The NCM, the National Emergency, Crisis and Disasters Management Authority and the Ministry of Interior will hold a special briefing on the adverse weather at 4.30pm on Thursday.

Double a year's rainfall in days

Parts of Fujairah have already received more than double the UAE's typical annual rainfall so far this week.

The highest amount of rain was recorded at a National Centre of Meteorology rain guage in Fujairah Port where 234.9mm of rain fell from 10:30pm on July 25 to 9:18am on Thursday.

The second highest was Masafi – 209.7mm – with the third highest recorded in Fujairah Airport with 187.9mm of rain noted.

Considering the UAE gets an annual rainfall of around 100mm a year then the statistics underline the intensity of the weather conditions.

The NCM forecast the unsettled weather last weekend and told The National on Thursday that similar conditions could be expected for the next few days but probably not to the intensity seen on Wednesday.

“The low pressure systems are slightly weaker with rainfall expected to be of less intensity,” he said.

“But we still have low pressure, convective clouds and a chance of rain across the country including Abu Dhabi and Dubai.”

The Ministry of Defence shared images of families being rescued from flooding in Khor Fakkan in the early hours of Thursday.

The government said non-essential public and private sector workers can work from home on Thursday and Friday in flood-affected areas in Fujairah, Sharjah and Ras Al Khaimah.

The decision excludes civil defence, police and emergency responders and those involved in community support to deal with damage to properties.

Sheikh Mohammed bin Rashid, Vice President and Ruler of Dubai, said nearby hotels should provide accommodation for people who have had to leave their homes.

The Ministry of Energy and Infrastructure will draw up a report of the damage caused by the heavy rainfall so that work could start to protect people and property, he added.

In Fujairah, teams used pumps to clear flood waters from main roads to allow traffic to flow, and workers sought to clear blocked drains. The Suhaila Al-Sharjah road to the city of Al Dhaid has been closed until further notice, due to the high level of running water, in order to ensure the safety of lives and property..

The Ministry of Interior said the safety of people and property is "top priority" and urged families in flooded areas to stay at home. If they must leave home and drive out of necessity they should "take extreme caution".

The Ministry of Community Development has also been given the task of accommodating those who have been displaced from their homes by the heavy rains, including those living in high-risk areas.

Those affected will be transferred to temporary shelters and nearby hotels until the weather clears.

The City Plaza Hotel in Fujairah City received a surge in demand for rooms from residents affected by the floods.

Mohammed Irfan, the receptionist at the hotel, said the property reached maximum occupancy on Wednesday night.

“We had a lot of walk-in customers last night at 9pm to 10pm when it was raining heavy and the floods became worse,” he said.

“We have 37 rooms and now we are fully booked. Last night, there was a lot of flooding in our area too and a lot of the ways were closed, but now it’s clearer around our hotel."

Prodyut Sinha, who is in charge of the front office at the Sandy Beach Hotel and Resort in Fujairah, said they received a handful of walk-in customers on Wednesday night.

“People came last night because they needed a place to stay,” he said.

“It’s more manageable in hotel buildings, but we’re a resort and with this kind of weather it gets difficult.

Hotels in Ras Al Khaimah that spoke to The National said they were operating as normal.

Flooding has affected the Al Nakheel district, a suburb in the emirate, which has only a few hotels.

Workers in civil defence, policy, security services or those involved in responding to crises or emergency services are to work as normal.

Sharjah was hit by flash floods for a second day on Wednesday, with drivers in the emirate battling challenging road conditions.

The east coast enclave has been lashed by torrential rain that has hit much of the country this week.

On Thursday morning, Sharjah's Roads and Transport Authority urged motorists to avoid using a road in the Daftah area leading to Khor Fakkan except for cases of "extreme necessity".

It said rocks which had fallen on the road after wadis overflowed were being removed.

An air rescue operation was launched in Oman to help more than 130 people left stranded after wadis were flooded during intense rainfall.

Footage shared by Royal Oman Police showed people being taken to safety by helicopter in the Madha area of the country.

Police said all 134 people were in good health and had been transferred to the local airport.

The force said it was continuing to support relief efforts during the hazardous weather.