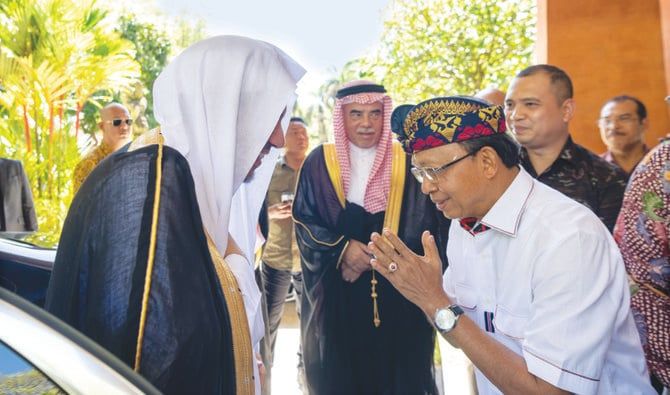 The secretary-general of the Muslim World League, Mohammed Al-Issa, arrived on the Indonesian island of Bali on Monday ahead of start of the R20 Summit, the first official engagement group on religion in the history of the G20.

The two-day forum, which aims to foster a rules-based international order founded upon shared values, begins on Wednesday and will feature more than 40 speakers from all 20 members nations of the G20. It has been organized in partnership with the MWL and the Nahdlatul Ulama, an Indonesian Islamic association. Indonesia holds the presidency of the G20 this year and Bali will host the organization’s main annual summit on Nov. 15 and 16.

Upon his arrival in Bali, Al-Issa was welcomed by I Wayan Koster, the governor of Bali; Yahya Cholil Staquf, the chairman of Nahdlatul Ulama; and other officials.

The R20 has already announced the launch of a forum titled “Building Bridges Between the East and the West: For a More Understanding and Peaceful World and More Coexisting and Harmonious Communities.”

The forum will discuss a number of pressing issues, including the inclusion of religious minorities, the refugee situation, and other religiously, intellectually and culturally controversial issues, along with relevant political matters.

Al-Issa confirmed that the forum is part of the interfaith group recently adopted by the G20 presidency as part of the activities of the group formed by the world’s 20 largest economies.

“The forum will constitute the biggest, most important and most welcoming and professional platform between the East and the West,” he said.

“It will witness the participation of senior specialists in the religious, intellectual, social and political fields, namely political parties and parliamentary committees dealing with humanitarian and social affairs.”

In keeping with the aims of the forum, the R20 Summit is expected to issue decisions on the establishment of scientific chairs at universities in the East and West, in addition to mechanisms that ensure positive communications between them. A number of academicians, institutions, research and supervision centers, and orientalists will also participate in the event through the presentation of research, studies and reports.

The forum will in addition include the participation of senior academicians from Harvard, including colleagues of late Samuel Huntington, the author of a thesis titled “Clash of Civilizations” that caused widespread intellectual controversy as a result of its argument that future wars will be fought not between nations but based on cultural and religious identities.

Al-Issa received the Norwegian Bridge Builder Award in 2021, the World’s Religions Peace Award from Sri Lanka in 2019, and the Italian Galileo International Award in 2018 for his efforts in promoting religious and cultural harmony worldwide.