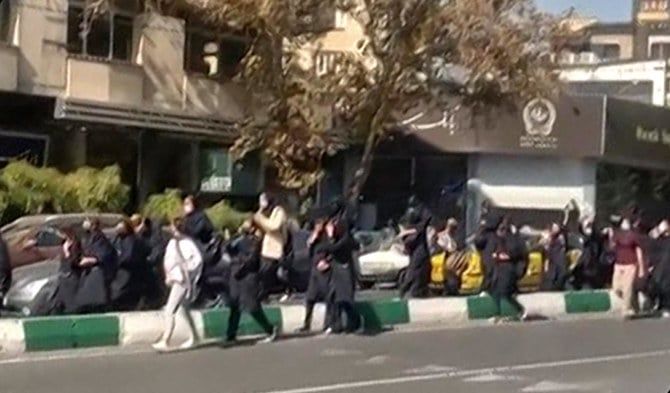 No push for Iran nuclear talks, US envoy says, due to protests, drone sales

Iran’s crackdown on protesters and the sale of drones to Russia have turned the United States’ focus away from reviving a nuclear deal, which Tehran has so far rejected, Washington’s special envoy for Iran said on Monday.
Speaking to reporters in Paris, Robert Malley insisted that the United States would leave the door open to resume diplomacy “when and if” the time came, but for now Washington would continue a policy of sanctions and pressure.

Talks to revive a 2015 accord between Iran and world powers have been at a stalemate since September. Western states accuse Iran of making unreasonable demands after all sides appeared to be nearing a deal.

“If these negotiations are not happening, it’s because of Iran’s position and everything that has happened since (September),” Malley said.

“Our focus is not an accord that isn’t moving forward, but what is happening in Iran ... this popular movement and the brutal crackdown of the regime against protesters. It’s the sale of armed drones by Iran to Russia ... and the liberation of our hostages,” he said referring to three American nationals held in Iran.

Anti-government protests broke out in September over the death of 22-year-old Mahsa Amini while she was in police custody. The EU, the United States, Canada and Britain have imposed sanctions over human rights abuses in Iran as well as for its drone sales to Moscow.

Iran has continued its nuclear program, installing hundreds more advanced centrifuges. The machines enrich uranium, increasing the country’s ability to enrich well beyond the limits set by the 2015 deal. Iran began breaching those terms in 2019 in response to a US withdrawal in 2018 under then-President Donald Trump.

Malley declined to give a timeframe on how long Washington would accept the status quo, but said if diplomacy failed the United States was ready to use other tools.

“If Iran takes the initiative to cross new thresholds in its nuclear program, then obviously the response will be different and coordinated with our European allies,” Malley said, without elaborating.

“There is no magic in which we will find a new formula.” Diplomats said Malley would hold talks in Paris with French, German and British counterparts on Tuesday.
#Donald Trump
Add Comment