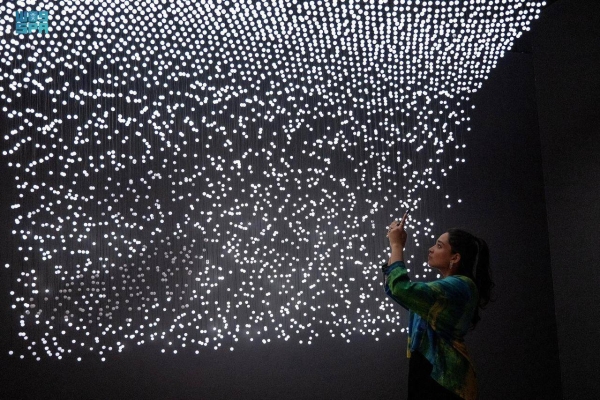 Noor Riyadh has made its mark on global celebrations, says Al-Hazani

Director of Riyadh Art Program Architect Khalid Al-Hazani believes Noor Riyadh, currently in its second edition, has found its place among celebrations around the world.
He indicated that the main goal of Noor Riyadh was to make Saudi Arabia's capital city to be a meeting place for artists to present the results of their creativity.

Eng. Al-Hazani made the remarks while speaking to Saudi Gazette on the sidelines of the pre-opening of Noor Riyadh. The Saudi capital has officially been illuminated with the launch of the second edition of Noor Riyadh.

The biggest edition of the light and art festival, which is held under the theme “We Dream of New Horizons”, will last for 17 days, providing opportunities for art lovers and those who look for unique works of art to visit the exhibition and discover the ideas behind each piece of art.

What distinguishes the current edition of Noor Riyadh is the fact the extent of the event has tripled compared to the first edition with more than 130 artists from 40 countries taking part with over 190 of their artworks.

Al-Hazani said artists in the past used to create their artworks outside Saudi Arabia, and now many of them including those working for major companies have opened shop in Riyadh because of the artistic movement taking momentum in the Kingdom.

Now there are more than 190 artworks in Noor Riyadh. These works will be much cheaper if they were produced here in Riyadh, instead of making them abroad and then shipping to the Kingdom at high costs, he said.

"This is an economic process that makes the investor think of investing in Riyadh, and this is one of the goals of Vision 2030 as well as the Riyadh Art project," Al-Hazani added.

He confirmed that 55 artworks are displayed for the first time in Riyadh in the second edition of Noor Riyadh, which is considered a great achievement.

The creative industry and the creative economy is one of the goals of Riyadh Art. Today, such events and the artistic movement encourage businessmen to invest in the fields of art, and in the field of industries that artists need, he noted.

Speaking about the impact of artistic works on the economy and investment in Riyadh, Al-Hazani said hotels were witnessing a significant increase in booking due to these events that take place in Saudi Arabia, Riyadh in particular, especially during the winter season, which offers a beautiful and attractive atmosphere. In addition to the Riyadh Season and the Riyadh Art project, many events prepared by the Ministry of Culture are underway in the city.

Al-Hazani pointed out that 40 locations in the city were covered by the artworks of Noor Riyadh from north to south, and east to west, in five main venues: The Diplomatic Quarter (DQ), King Abdullah Financial District (KAFD), Salam Park, JAX District – a new creative zone in the capital city, and King Abdullah Park.

He said the city’s residents would not be satisfied to visit a specific site alone in the five venues because of its proximity, rather they would love to visit as many sites of Noor Riyadh as possible, because “every location is distinguished by its impressive artworks.”

The artworks are distributed among different locations across the city requiring the individual visitors to move around and visit all places. "This is the idea of diversity, which gives visitors the opportunity to move freely and enjoy the artworks," Al-Hazani said.

He added that with time, art lovers will be able to determine the location they want to visit and the artist they like based on information posted on social media. They may go to a certain area only to see a specific artwork, Al-Hazani said, emphasizing that he believes 17 days are not enough to see the huge volume of dazzling artworks in Noor Riyadh.

Al-Hazani confirmed that the percentage of Saudis participating in the second edition of Noor Riyadh has exceeded the target. Only 20% of the Saudis were expected to visit the shows, but they exceeded 34%, which proves that opportunities exist for Saudi creators, and they are no less creative than artists coming from abroad.

He pointed out that this intellectual movement and the exchange of ideas contributed to the artists being influenced by each other. "Even foreign artists who came to Noor Riyadh were influenced by artworks from the previous edition, with many of them praising certain ideas, and this would open up horizons and creativity for Saudi artists," Al-Hazani said.

Regarding how the artworks displayed in Noor Riyadh were being chosen, Al-Hazani said they had a high-level technical committee that includes experts. A purely technical analysis is made on all offers that reach them, and then they choose the best, which creates competition year after year, and will contribute to making Noor Riyadh a milestone in the world's arts festivities.

When asked whether a new edition of Noor Riyadh using natural light sources will be launched in the near future, especially as the Royal Commission of Riyadh aims to transform the city into a fully sustainable eco-friendly environment, Al-Hazani said the Royal Commission was indeed moving toward that goal, but Riyadh Art in general and Noor Riyadh in particular does not want to restrict the freedom of artists with their artwork. He said he was sure that they would walk with this goal without restricting the artists.

Al-Hazani said some artistic creations such as drones need conventional energy sources. He however stressed that they were interested in green energy and encouraged use of natural energy sources. In the second edition of Noor Riyadh there are more than one artist who relies on green energy for their artworks. One example is Haroon Mirza'a artwork in the "Energy for the sake of power" (Solar Symphony 16), which is displayed at the exhibition From Spark to Spirit at the JAX 03. It will run until Feb 4, 2023.

Al-Hazani announced the Tuwaiq Sculpture Forum in January, with an increase in the number of sculptors participating to 30 from last year's 20.

The event is characterized by the fact that the artists will sculpt in open air, giving visitors the opportunity to see a simple rock being transformed into a piece of art.

Al-Hazani said the event is accompanied by cultural activities, similar to the activities that will be held in the second edition of Noor Riyadh. More than 500 events ranging from tours to talks, workshops, family activities, volunteering programs and live musical concerts are lined up.

These activities and workshops would enrich the artistic movement in Saudi Arabia, he said, adding that the creativity that the city's residents witness will widen their tastes. This in turn will reflect on future generations, contributing to raise creativity in Riyadh and the Kingdom as a whole, he said.
Add Comment