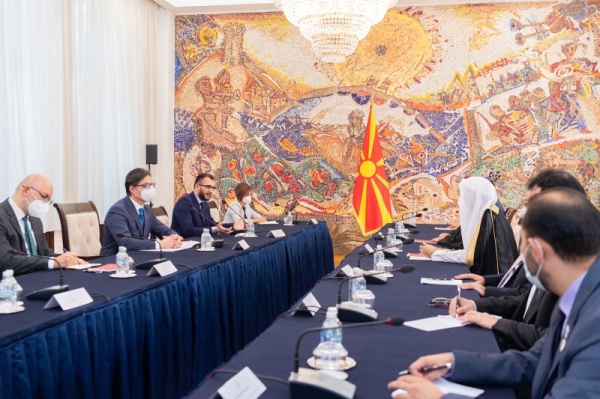 Dr. Stevo Pendarovski, president of the Republic of North Macedonia, received Sheikh Muhammad Al-Issa, secretary general of the Muslim World League (MWL) at the Presidential Palace of Villa Vodno here. The MWL chief is currently visiting Skopje in response to an official invitation from President Pendarovski.
During the meeting, Pendarovski appreciated Al-Issa for the important and influential role he plays in spreading the values of tolerance and coexistence around the world.

He underscored that the European countries consider Al-Issa as the most influential and acceptable Islamic figure, thanks to his global discourse and his actions on the ground in terms of moderation and building bridges of understanding, friendship and cooperation between peoples.

On his part, Al-Issa expressed his appreciation of the generous invitation he received from Pendarovski. “MWL is keen to build bridges between peoples in order to enhance the peace of our world and the harmony of its national societies through religious and cultural commonalities and the common humanity,” he said.

North Macedonia Parliament Speaker Dr. Talat Xhaferi also received Sheikh Al-Issa at the parliament headquarters in the Macedonian capital. They discussed ways to enhance joint work between the two countries. The heads of parliamentary committees and senior Macedonian statesmen were also present on the occasion.

The MWL chief gave a lecture on the “Sunnah of the Creator, nature of human diversity according to Islamic concepts.” The North Macedonia Scholars’ Council has decided to translate the lecture into all the languages of the Balkan countries.

Sheikh Al-Issa visited Skopje Cathedral where he was accorded a warm reception. Speaking on the occasion, Sheikh Al-Issa said Macedonia represents a distinct model of coexistence.

During the visit, the MWL chief met with members of the Governmental Committee for Relations with Sects and Religious Groups at its headquarters in Skopje. He discussed a number of important issues during the meeting, which was attended by the committee’s director, advisers, and senior government officials.
Add Comment