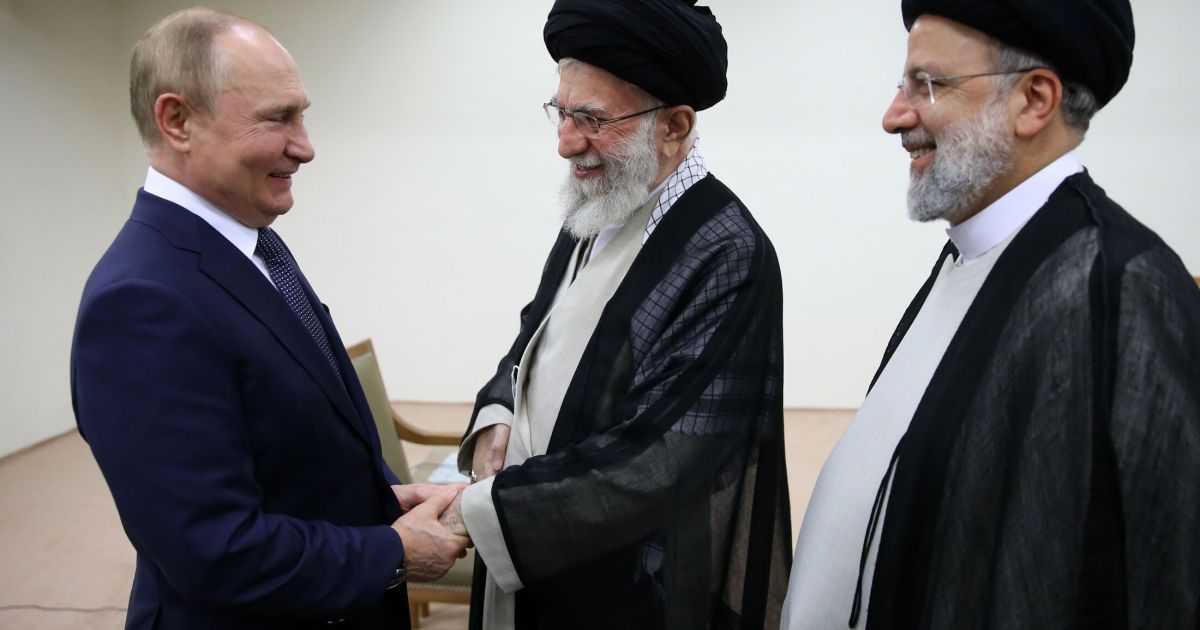 NATO would have eventually started Ukraine war: Khamenei to Putin

Meeting of Iranian and Russian leaders in Tehran came shortly ahead of trilateral summit with Turkey’s President Erdogan.

Iran’s Supreme Leader Ayatollah Ali Khamenei has told Russia’s President Vladimir Putin that had he not started the war in Ukraine, NATO, the “dangerous creature”, would have done it eventually.

“War is a violent and difficult issue and the Islamic Republic is in no way happy that civilians get caught up in it, but concerning Ukraine, had you not taken the initiative, the other side would have taken the initiative and caused the war,” Khamenei was quoted as saying by his website after he met with Putin in Tehran on Tuesday.

He said the West is opposed to a strong and independent Russia, adding: “NATO would know no bounds if the way was open to it, and if it was not stopped in Ukraine, it would start the same war using Crimea as an excuse.”

Putin was quoted as calling the loss of civilian life in the war a “big tragedy”, but blaming the West for causing a Russian “reaction”.

“Some Western countries had said we’re against Ukraine’s membership in NATO but we agreed to it under pressure from the US, which shows their lack of independence,” the Russian leader was quoted as saying.

The two leaders also reportedly discussed bilateral relations and gradually removing the US dollar from bilateral trade, in addition to Syria, Israel, and South Caucasus.

Putin also met with Iranian President Ebrahim Raisi in Tehran on Tuesday. The meetings came shortly ahead of a trilateral summit on Syria with Turkey’s President Recep Tayyip Erdogan, who had sat down with Khamenei and Raisi hours earlier.

The office of the supreme leader published an image of Khamenei shaking hands with the Russian president, a rare occurrence since the COVID-19 pandemic. Khamenei had only shaken hands with Syrian President Bashar al-Assad, Iran’s other major ally in the region, who had made a surprise visit to Tehran in May.

A clip of Putin’s meeting with Raisi showed them praising improvements in bilateral relations and cooperation across the region.

“In terms of international security, we will increase our cooperation,” Putin said, adding that the two countries play a major role in ensuring Syria’s security.

The Iranian president told him cooperation between Iran and Russia has created stability and security in the region.

“Countries that made claims about fighting terrorism in West Asia didn’t take any meaningful steps in this regard, but it was the Islamic Republic of Iran and Russia that showed their honestly and serious will through serious cooperation on fighting terrorism,” Raisi said.

This is Putin’s fifth trip to Tehran and his second foreign visit since he launched the war in Ukraine in February. Putin first visited the Iranian capital in 2007, and subsequently in 2015, 2017, and 2018.

His visit comes days after US President Joe Biden finished a tour of the region that saw him visit Israel, the occupied West Bank, and Saudi Arabia, where he also met with regional Arab leaders.

The meetings come after Putin’s delegation, which had arrived late on Monday, earlier on Tuesday signed a memorandum of understanding (MoU) worth $40bn with Iran on developing oil and gas fields.

According to the Iranian oil ministry’s official news outlet, the MoU was signed between Russian energy giant Gazprom and the National Iranian Oil Company and covers the development of the Kish and North Pars gas fields, as well as six oil fields.

Iran has the second-largest reserves of natural gas in the world after Russia but has lagged in expanding its infrastructure due to sanctions that have prevented foreign investments.