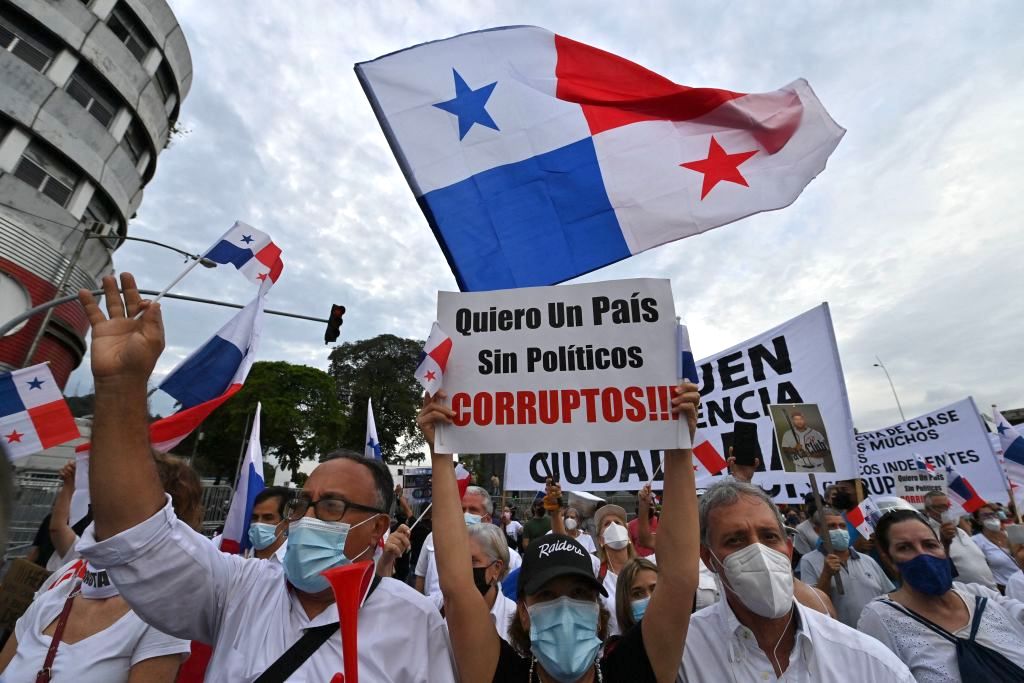 This fall, Panama has seen large “pro-democracy” and “anti-corruption” protests, backed by mainstream media and much of the country’s business elite. But corruption isn’t owed to a few “bad apple” politicians — it’s rooted in Panama’s ultra-privatized economy.

This fall has seen unprecedented protests in Panama, after President Laurentino Cortizo signed an antidemocratic electoral reform into law. In a country whose population numbers little over 4 million, up to five thousand people took to the streets to denounce a government move that limits press freedoms during campaign season, weakens independent candidacies, and rejects gender parity.

Liberal activist Aurelio Barría — an executive for Motta International, one of the country’s biggest business conglomerates — told the Associated Press, “Many of us gathering here have been adversaries in the past but today we’re on the same struggle to restore democracy.” Yet despite their all-embracing “pro-democracy” messaging, the protests inevitably pointed to real political divides.

The loudest voice rejecting Cortizo’s reforms has been a Panamanian “civil society,” including figures like Barría, composed mainly of NGOs with connections to the United States and Panamanian economic elites. They’ve called “citizen vigils,” where regular people marched next to real estate moguls, businessmen, financial consultants, and opposition leaders. Even the president of the Chamber of Commerce attended, explaining his presence to reporters by emphasizing how important strong institutions are for attracting foreign investment. The intense media coverage of the rallies included live drone transmissions and supportive front-page headlines, warning that Panamanian democracy was on the brink — and that only rejecting these reforms could save it.

This consensus narrative on these protests, as framed by the media monopolies, presents Panama as faced by one central problem standing above all others: corruption. Yet for all the energy invested in such claims, they are also nothing new. In fact, like a repetitive legal soap opera, Panama’s political history is a long series of bribes, hidden budgets, and loyalist displays of partisan allegiances. Yet there’s barely any twist in the tale. The usual suspects are always the “politicians” — the “bad apples” that contaminate Panamanian democracy with their petty corruption. But there’s no mention of who is greasing these politicians’ palms — Panama’s financial and business interests, many of whom themselves joined these protests.

Rather than a struggle for democracy, much of the mainstream opposition’s role in these protests point to an elite that is no longer satisfied with how traditional political parties are doing its bidding. It is now diversifying its investments through new “anti-corruption” politicians — usually touted as “independents” — who also have no interest in solving Panama’s record-breaking inequality.

This political landscape resembles the “cousins’ brawl” that marked most of the twentieth century, where the struggle among an extremely narrow elite wasn’t defined by broad political projects for Panama, but rather by which of them would take the larger share of the economic pie. While there are new characters in this drama, many of the same family names remain. But the problem also lies in the lack of alternatives to this — and the taboos against left-wing discourse in a country that has never had a socialist government. For most poor Panamanians, the media story of anti-corruption is also the banner to which they should attach their hopes and dreams, too.

A History of Corruption

Corruption is — it is true — deeply ingrained within the republic’s history. A state of Greater Colombia following independence from Spain in November 1821, Panama became a separate country in 1903, in a process driven by the interests of a wealthy elite that rejected economic protectionism.

Behind Panama’s creation were white, Catholic landowners, further enriched by the transit economy that originated from a US-built railroad and wanted to open the isthmus to free trade. In this effort, even national sovereignty was on the table: they also considered becoming a British protectorate, before throwing in their lot with the United States.

In exchange for land to build and operate an interoceanic canal, Washington offered financial support — bribes — while also sending warships to the Panamanian coast to intimidate the central government. Already in the throes of a civil war, the Colombian federation was strong-armed into signing Panama’s independence.

Ever since then, patronage and nepotism have defined Panama’s political regime, forming the bedrock of relations between parties and local leaders, as well as the distribution of posts in public office. This also set up a high entry barrier for any emerging working-class parties, already facing harsh anti-communist repression pushed by the United States.

Alliances with liberals were short-lived, and popular leaders sucked into the traditional parties’ patronage machines. Meanwhile, in the US-controlled Canal Zone, migrant and Panamanian service workers were discriminated against and subjected to the Jim Crow–styled Gold and Silver Roll system. European and American workers were paid in gold, while migrants and Panamanians, regardless of race, were paid in silver. This system lasted until the 1940s.

Established economic elites temporarily lost their direct political stranglehold in the 1968 coup d’état, when General Omar Torrijos became dictator. His national-populist regime was responsible for the 1977 treaty with US president Jimmy Carter, which promised to return the canal to Panamanian control by 2000, albeit on the condition that the United States still retained the right to defend upon any threat of its interests. Torrijos also increased public and social spending on infrastructure, education, health, and social housing.

Yet, this regime was hardly socialist. Among the Junta’s initial economic aims was the strengthening of the country’s tax-free zone, and promoting Panama as a hub for international finance. During the regime’s first years, socialists were also persecuted and assassinated. Corruption and political repression worsened under Torrijos’s successor, Manuel Noriega, who eventually fell out of favor with the United States, prompting an invasion on December 20, 1989 that removed him from power.

The causes behind the invasion are debated to this day — the official rationale being that it was a move to protect US nationals, and also take action on drug trafficking charges leveled against Noriega. But this discourse overlooks Noriega’s close relationship with the CIA, and his collaborative role in scandals such as the Iran-Contra Affair, which make his ouster look rather more like the elimination of a troublesome asset.

In any case, the invasion was yet another episode in the United States’ history of open intervention in Panama, to ensure a minimum of stability for the canal. The official death toll is around five hundred, but human rights organizations and activists point to a grimmer number.

Former US attorney general Ramsey Clark traveled to Panama a few weeks after the invasion and visited morgues and mass graves to help Panamanians and Americans find their missing relatives. When he testified before a district judge in the United States in April 1990, Clark said the unofficial estimated death toll ranged between four thousand and seven thousand. Today, the Association of Family Members of the Fallen from December 20, 1989 maintains that four thousand died from the invasion.

With Noriega’s overthrow, economic elites — which during protests against the regime had explicitly called for the US invasion — regained their direct hold on political power. The two following administrations advanced neoliberal structural adjustment measures, and privatized government-controlled businesses in industries like cement, sugar, electricity, fruit juice, casinos, and telecommunications, among others. These measures had already been attempted by the right wing of the Noriega dictatorship, but their efforts failed.

Today, Panama has a fast-growing economy, compared with the rest of Latin America (according to pre-pandemic numbers, at least). Yet it also remains one of Latin America’s most unequal countries. Even as high-rises have cropped up on the coastline and shopping malls have been built in its cities, one Panamanian dies from malnutrition every three days.

A Byzantine system of thirty minimum wages is catered to specific regions and industries, but none of them are enough to fulfill families’ basic necessities. Poor communities are being systematically evicted for state or private building projects. Meanwhile, the national health and pension system, which insures over 80 percent of the population, is today under danger of privatization.

Who Calls the Shots

Now, the elite that pushed and benefited from this savage capitalism is marching to “save Panamanian democracy.” In reality, its efforts are more like a continuation of a long history of intra-elite struggles. But for a parallel wave of protesters, there wasn’t much of a democracy to begin with. In these demonstrators’ view, the real struggle is to start building an actual democracy in Panama.

Indeed, even without the loudspeaker of mainstream media, the Panamanian left has managed to stage big protests against the electoral reforms. Unions and social organizations have made sure to distance themselves from the right-wing protesters under slogans such as “It matters who calls [protests]” (“El que convoca sí importa”), and scheduled many of their demonstrations on different days. Students, feminist collectives, and organized racial minorities took the streets and went further than condemning a vague specter of petty corruption, instead protesting against the economic system behind Panama’s many injustices.

Protests staged by the Left are often overlooked by the mainstream media, but the numbers on these marches (amounting to some two thousand people) have been such that outlets have been forced to cover them, albeit refraining from giving their stamps of approval. TV reporters doing live coverage of the protests commended the lack of curse words in their chants as well as their orderliness, because “these kinds of things usually get out of hand.” Rather than highlighting the crowds (of which no official counts were made), the drone shots focused on barricades and traffic lines forming because of the demonstrations.

The problem is how to make these protests into a more enduring force in Panama’s political life. With election turnout at around 70 percent, Panamanians are reasonably active in politics. But there is little diversity in the forces that get elected. The country’s extreme inequality and concentration of cultural power by the elites perpetuates an updated version of the “cousins’ brawl.” Moreover, the United States’ anti-communist agenda has influenced the Panamanian political sphere up until today, where any kind of left-wing activism is immediately shut down and censored by media outlets, if not used as ammunition for intra-elite struggle.

In recent history, the Left’s main electoral representation has been the Broad Front for Democracy (FAD), which stems from the construction workers’ union, SUNTRACS, which is also the country’s largest. But their participation in the last two elections fared extremely poorly, with no congressional seats won, and a below 1 percent share in the presidential election. As per Panamanian electoral law, the party lost its legal status after both its elections, due to poor electoral results. Once again, they are collecting signatures.

It’s difficult to tell how well they will fare in future elections, but the immiseration worsened by the pandemic has submerged a hundred fifty thousand people into poverty, and the people’s growing discontent is visible. For now, the protests at least offer some hope. Under a less concentrated media regime, many in the citizen vigils may even realize that the real culprits behind their low wages, insecurity, and higher cost of living are more than just “crooked politicians,” but the crooked businessmen, bankers, and financiers marching next to them.
Add Comment