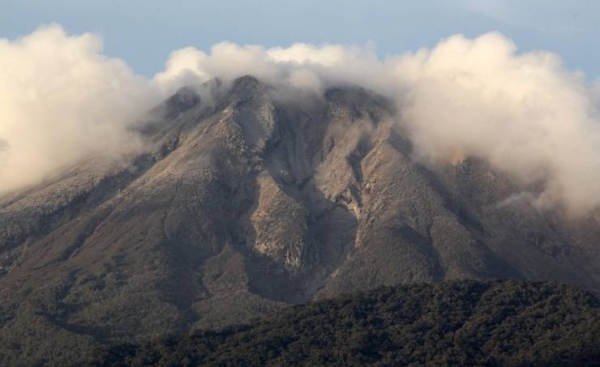 A restive volcano in the central Philippines spewed a column of ash at least 1 km (0.6 mile) into the sky on Sunday, prompting authorities to raise the alert at Mount Bulusan by one notch and remind residents not to enter the danger zone.
The Philippine Institute of Volcanology and Seismology raised its alert on Bulusan to level 1, or low level of volcanic unrest, from 0 on a five-level scale, which means it is currently in an "abnormal condition."

In the 24 hours before the eruption, 77 volcanic earthquakes were recorded, the institute said in a statement.

Renato Solidum, the head of the institute, described Bulusan's eruption as "phreatic", or steam-driven, which is typical of Bulusan Volcano.

"The precaution is the same, no entry in the 4 km radius permanent danger zone, and of course, one has to be protected form ashfall if there will be ashfall in the area, like wearing of masks or staying indoors," Solidum said.

The huge cloud of ash from Bulusan turned the skies grey, as seen in a video shared on Facebook by a resident of Casiguran town on Bulusan's northern slopes.

Bulusan, among the Philippines' 24 active volcanoes, last erupted in June 2017, the institute said.

The Philippines is in the Pacific "Ring of Fire," where volcanic activity and earthquakes are common.

Mount Pinatubo, on Luzon island in the northern Philippines, erupted in 1991 after lying dormant for 600 years. That eruption buried dozens of villages under tonnes of mud. More than 800 people died, mostly from diseases in crowded evacuation camps.
#Facebook
Add Comment