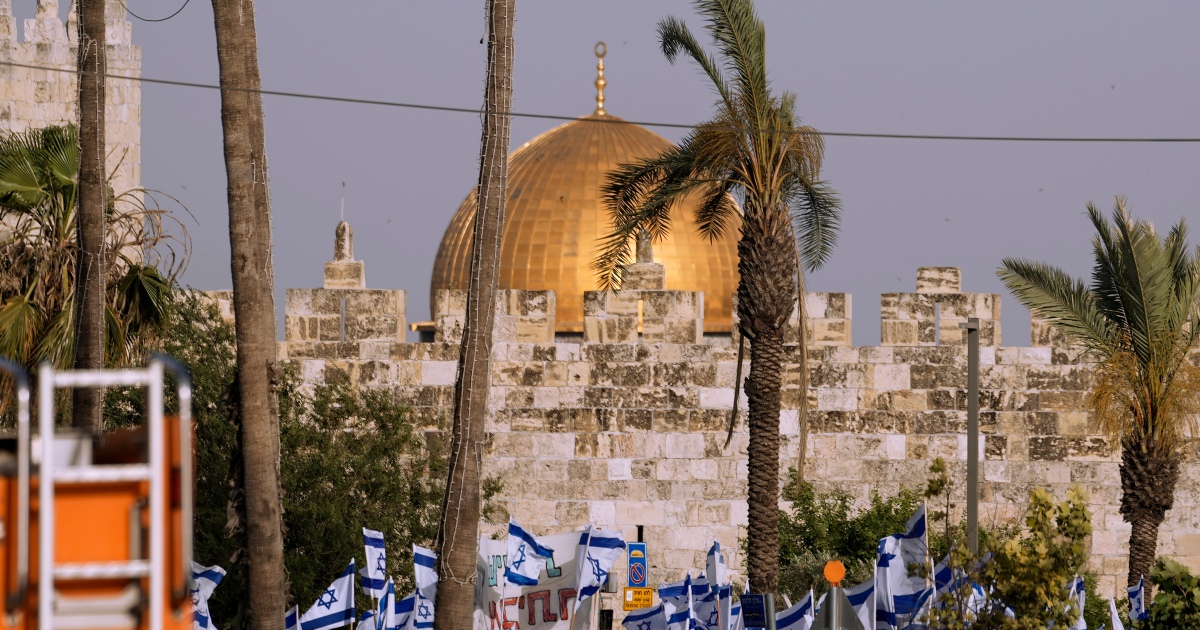 The annual so-called flag march came after the far-right Israelis stormed the Al-Aqsa Mosque compound – Islam’s third holiest site – in violation of the status quo. Jewish prayers are prohibited at the compound, where Jews believe the biblical temple once stood.

Israel captured East Jerusalem, including the Old City, in the 1967 Mideast war and later annexed it in a move never recognised internationally.

The Palestinians, who seek East Jerusalem as the capital of a future state, fear the Israeli march and storming of Al-Aqsa is a plot to take over or divide the area.

Israel denies such claims, saying it remains committed to the status quo.

In the occupied Palestinian territory, people protested against the march, burning Israeli flags and in many cases leading to confrontations between Palestinians and Israeli security forces. Dozens of Palestinians have been arrested and more than 100 have been injured. 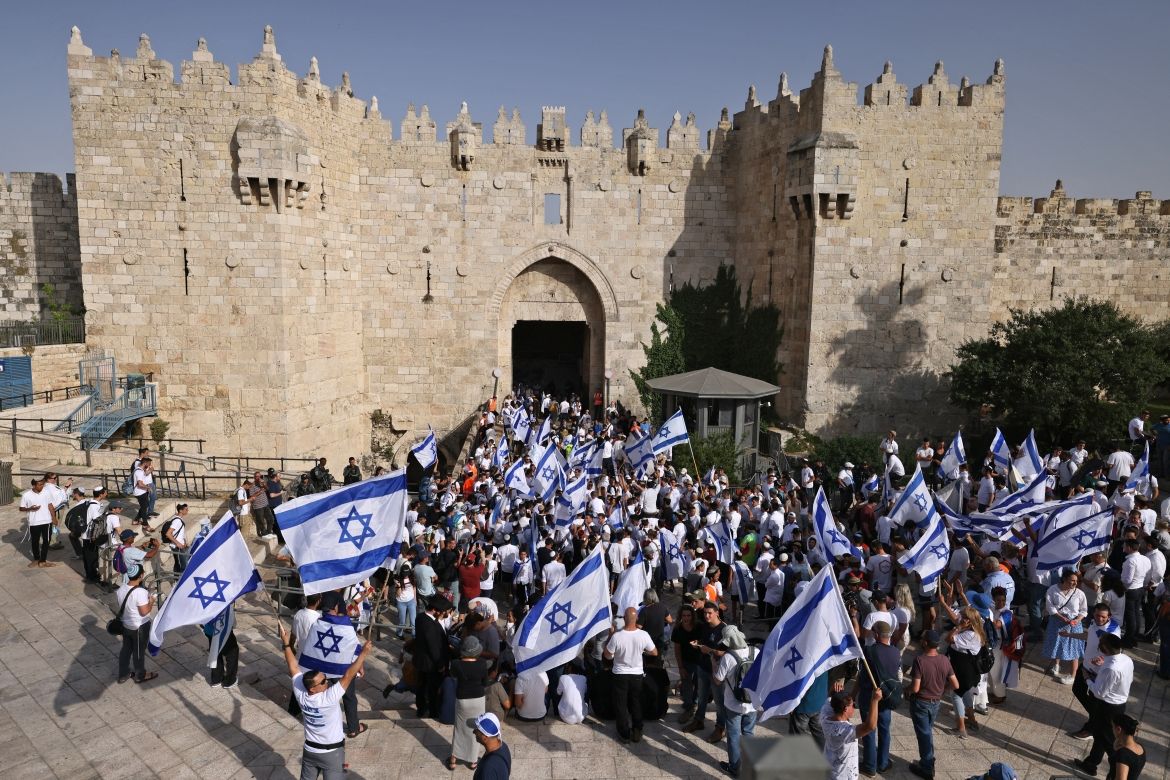 Far-right Israelis march with flags at the Damascus Gate of the old city of Jerusalem. 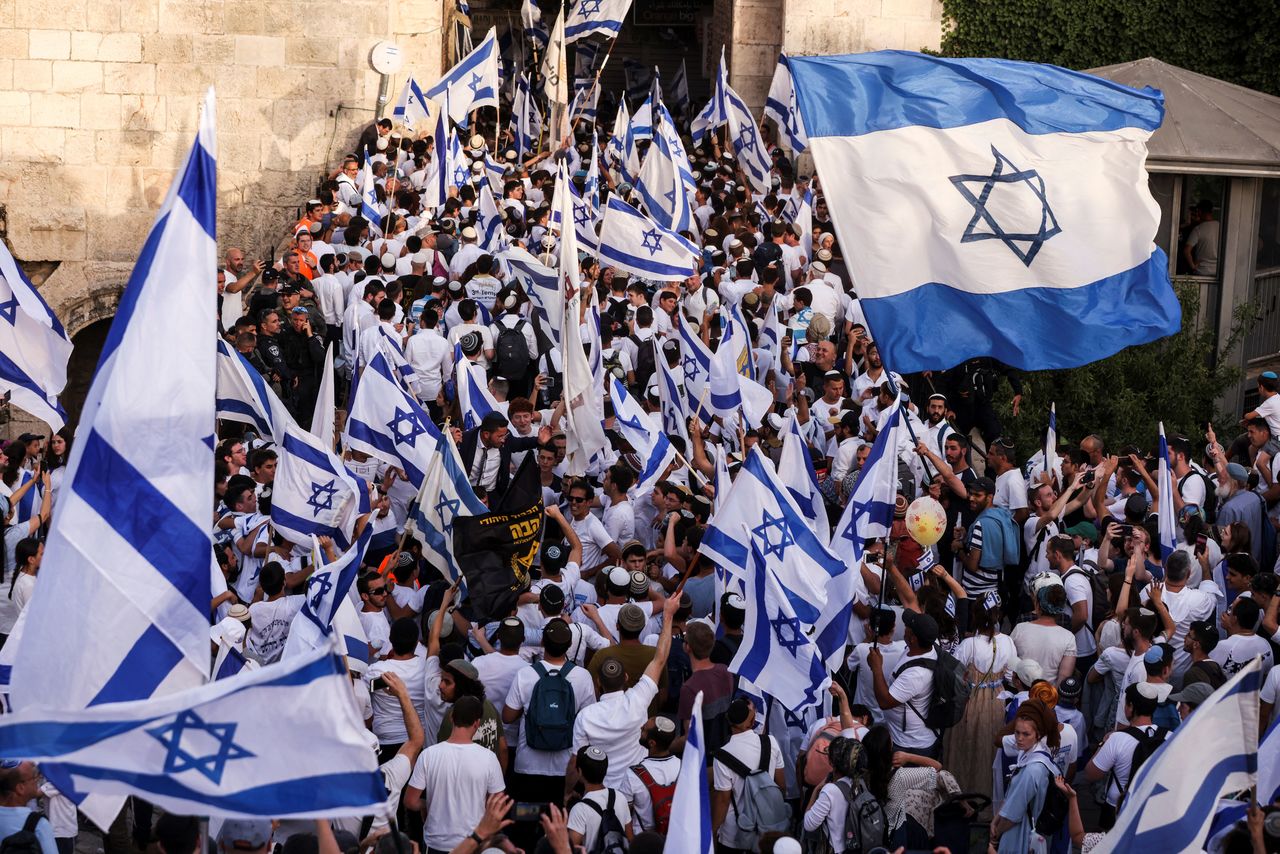 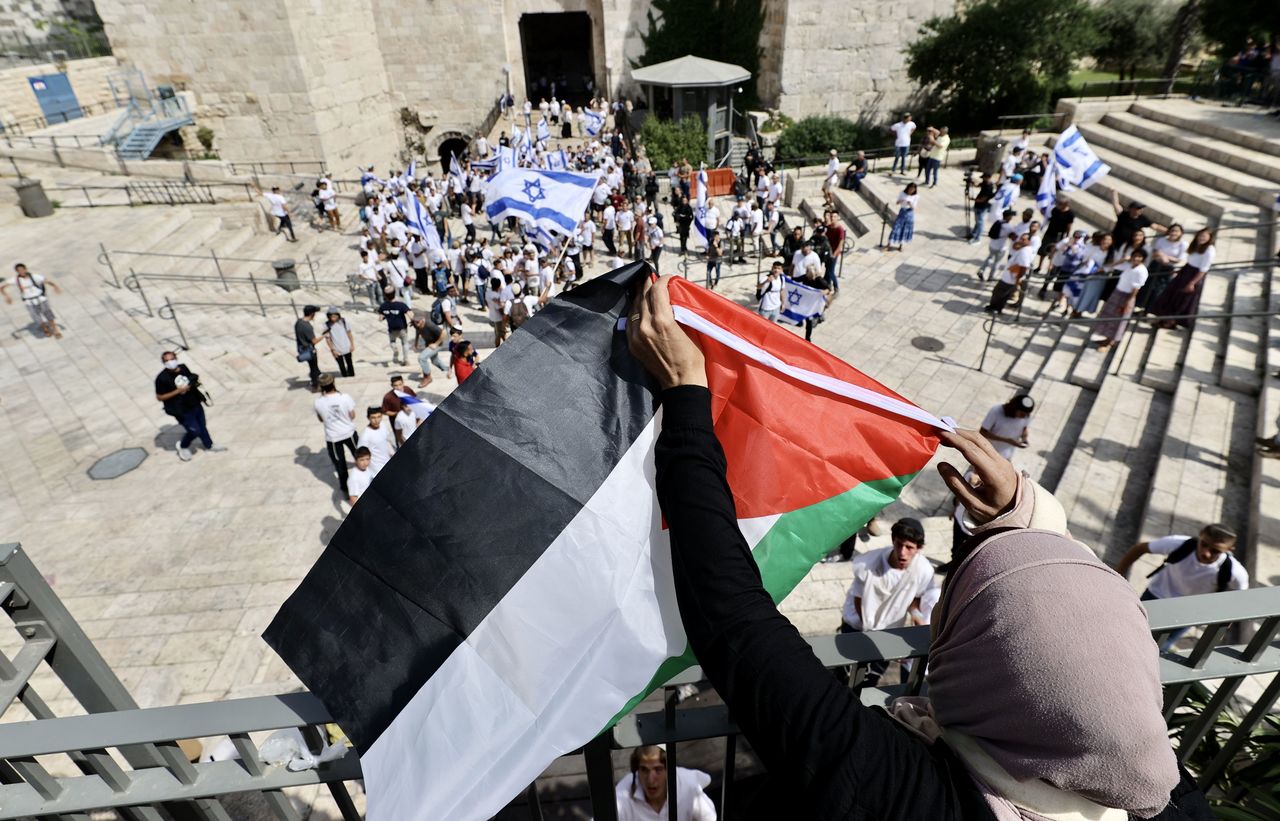 A Palestinian woman waves a Palestinian flag as she protests against the Israeli celebration of the annexation of East Jerusalem that was never recognised by the international community. 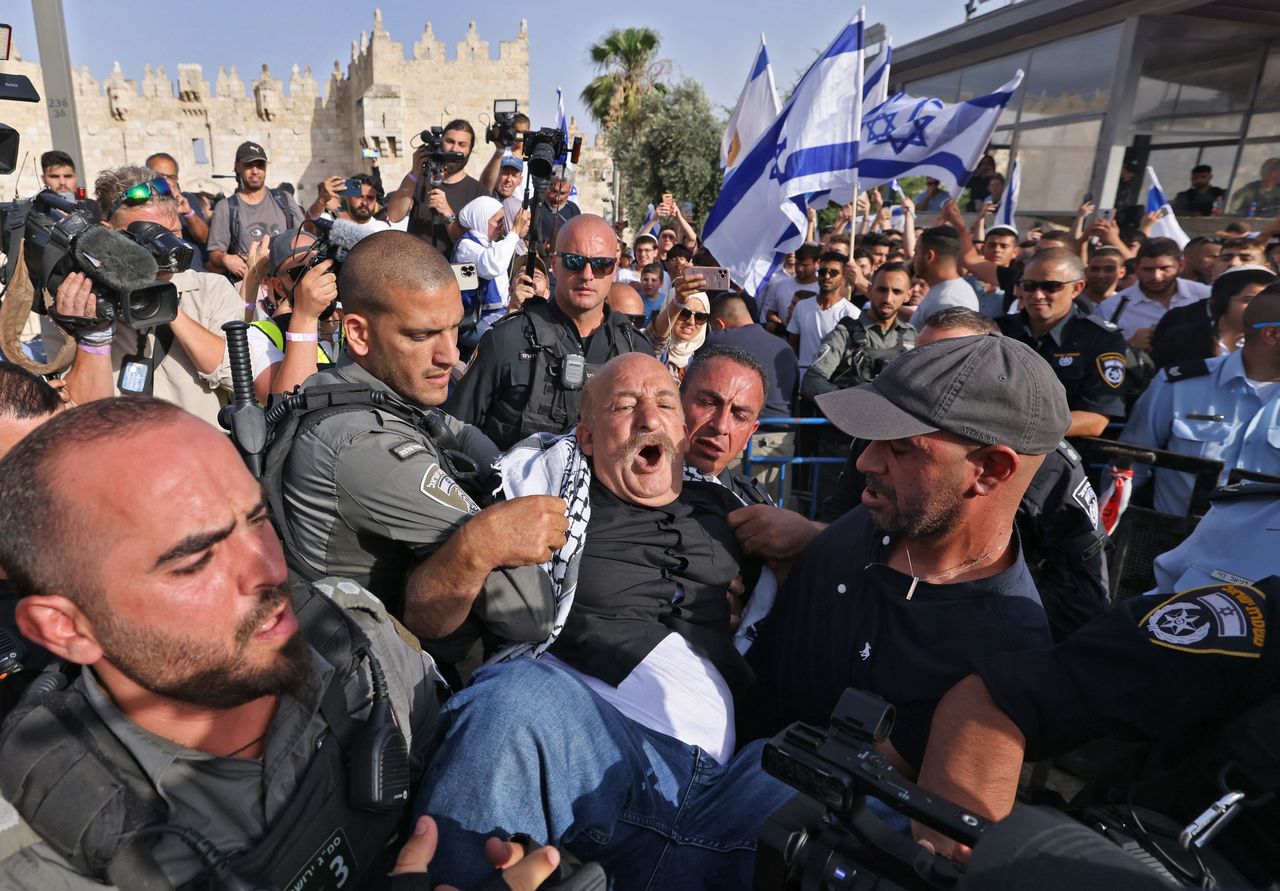 Israeli border guards arrest a Palestinian man during the Israeli 'flags march'. Al Jazeera's Imran Khan said that Israeli forces, however, did not stop the Jewish crowd from the march despite fears of confrontations. 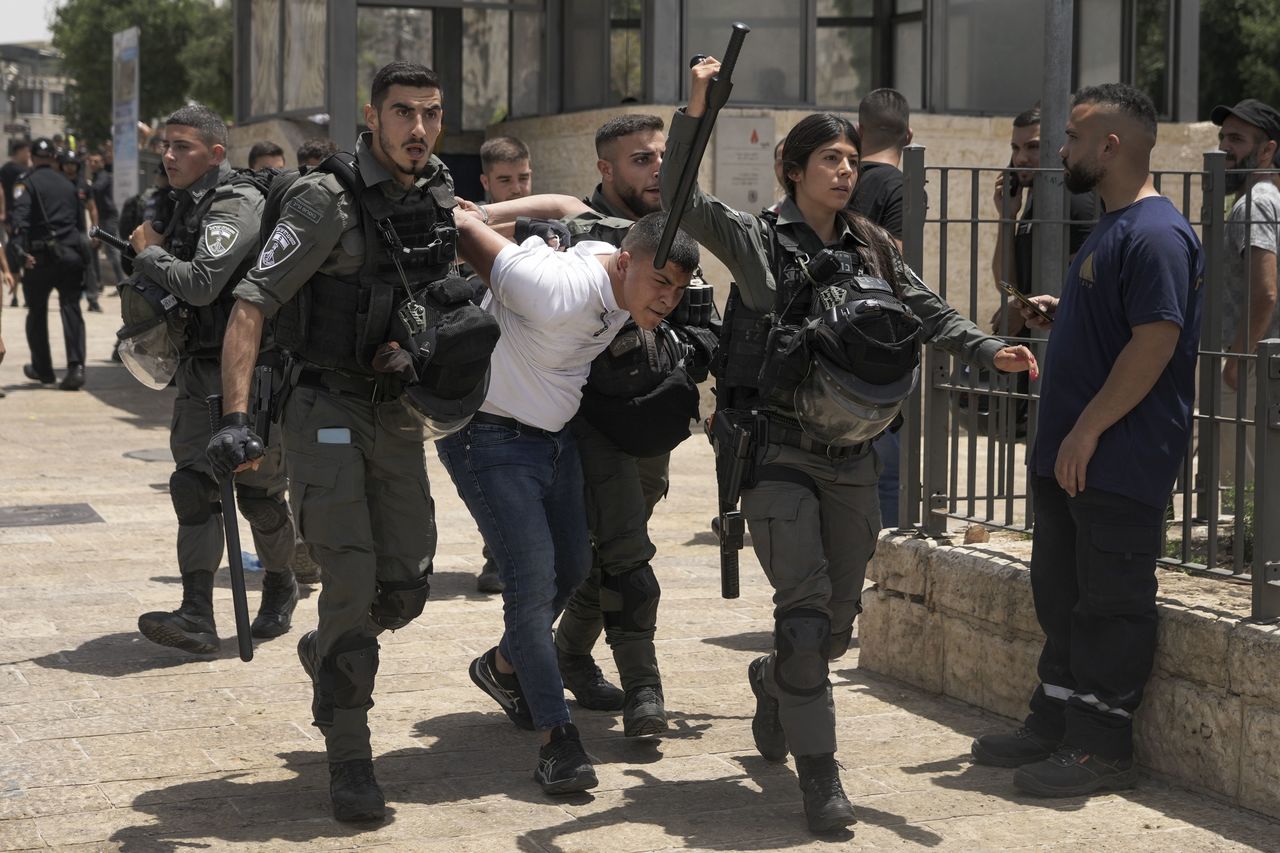 Members of Israeli security forces arrest a Palestinian protester near Damascus Gate outside Jerusalem's old city. The Israeli forces did not prevent the storming of the Al-Aqsa compound by the far-right Jewish groups. 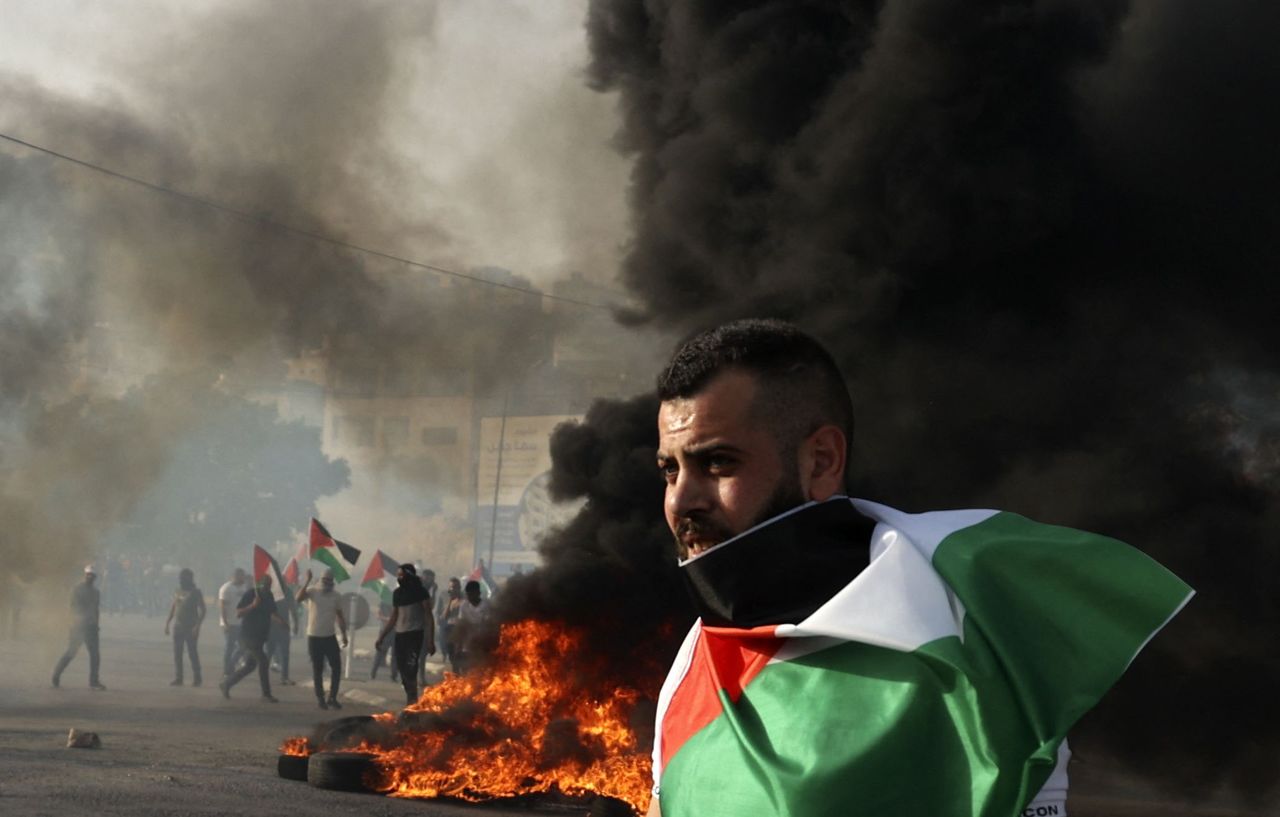 A protester draped in a Palestinian flag looks on as Palestinians protest against the flag march and the storming of the Al-Aqsa Mosque compound. 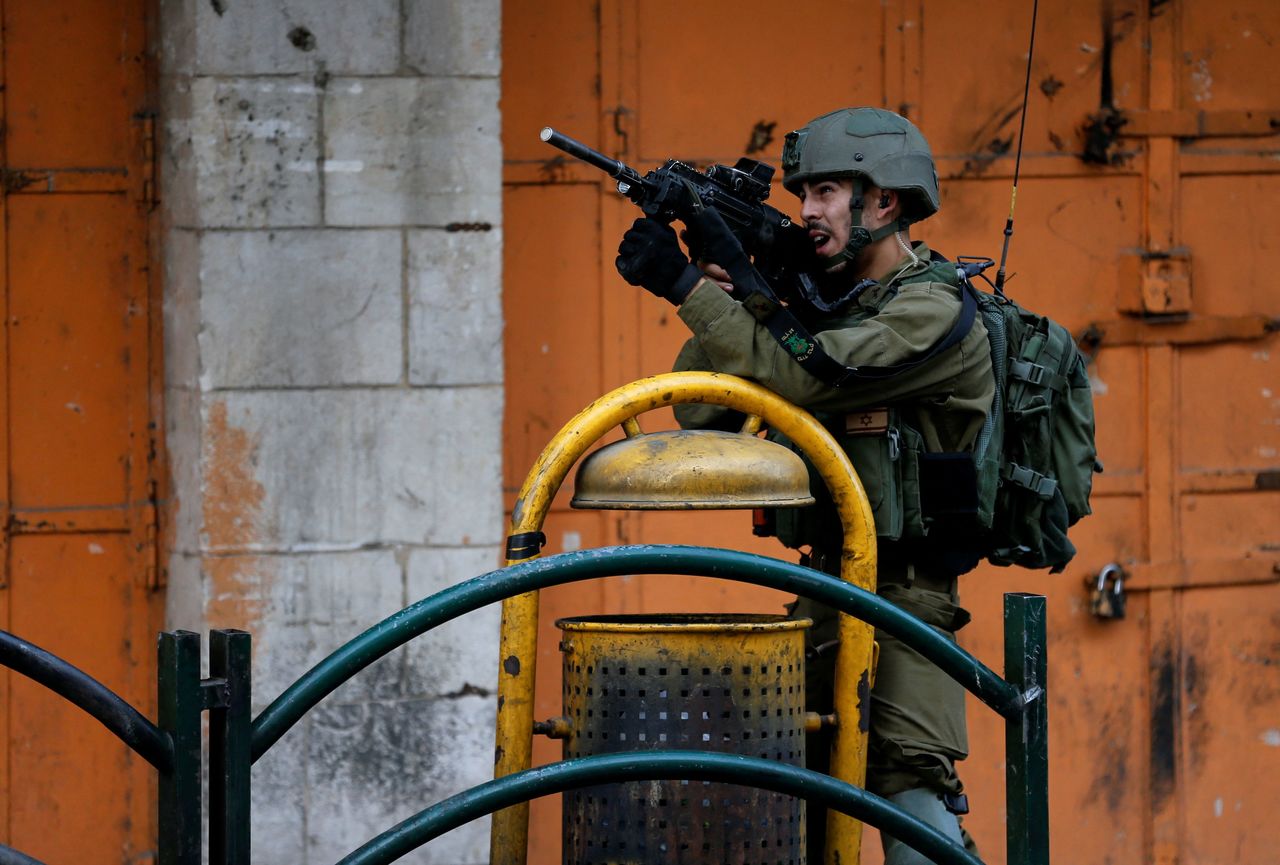 A member of Israeli forces takes aim during a protest by Palestinians in Hebron in the occupied West Bank. 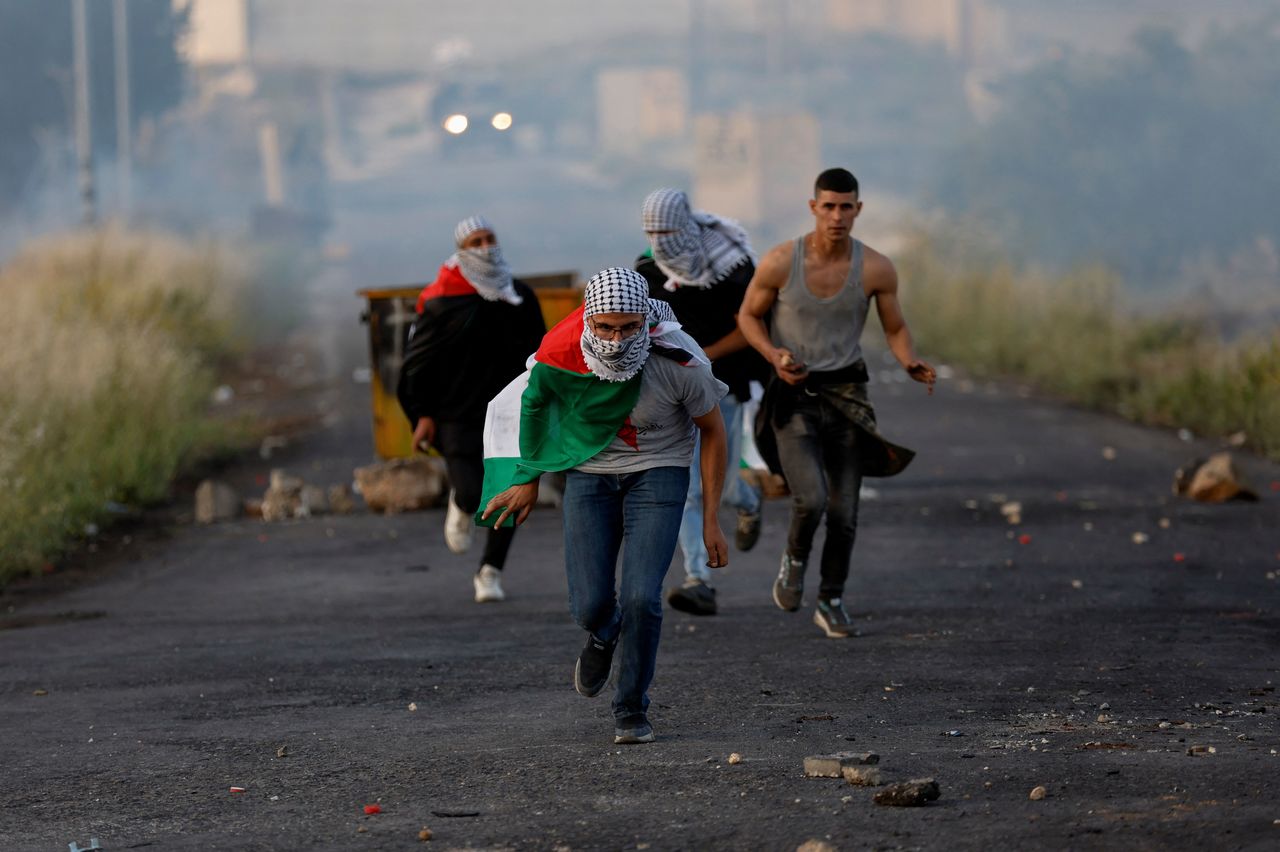 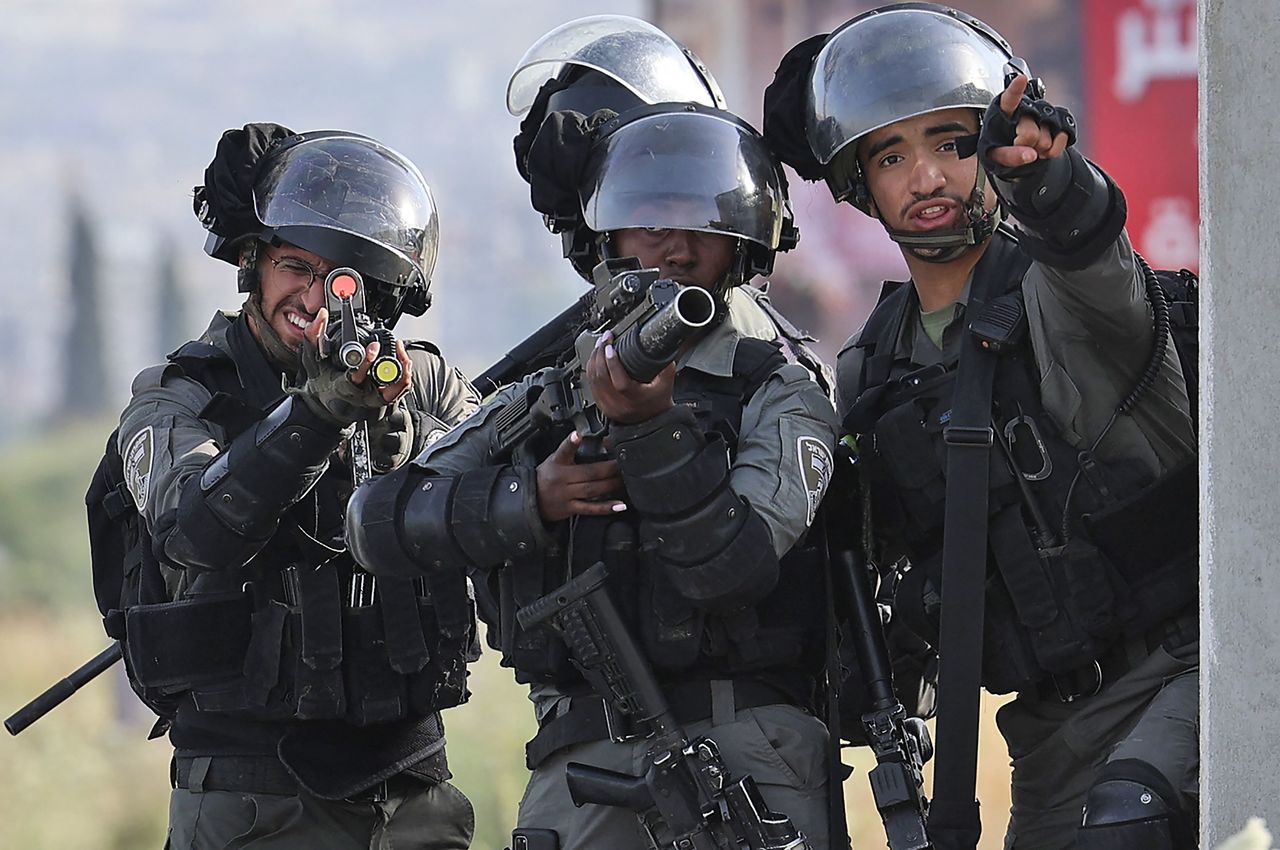 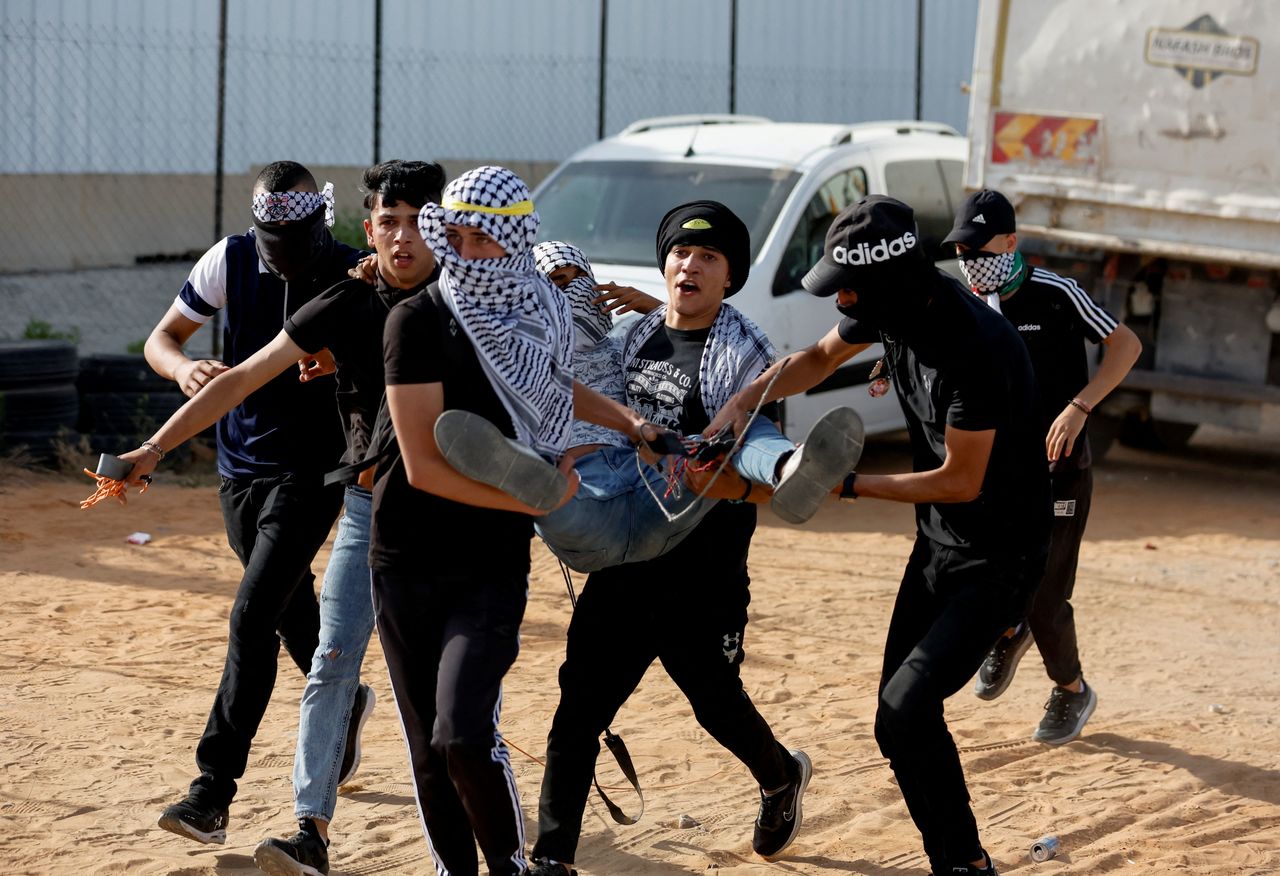 A wounded Palestinian is carried after Israeli forces fired rubber bullets at protesters near the Israeli settlement of Beit El. 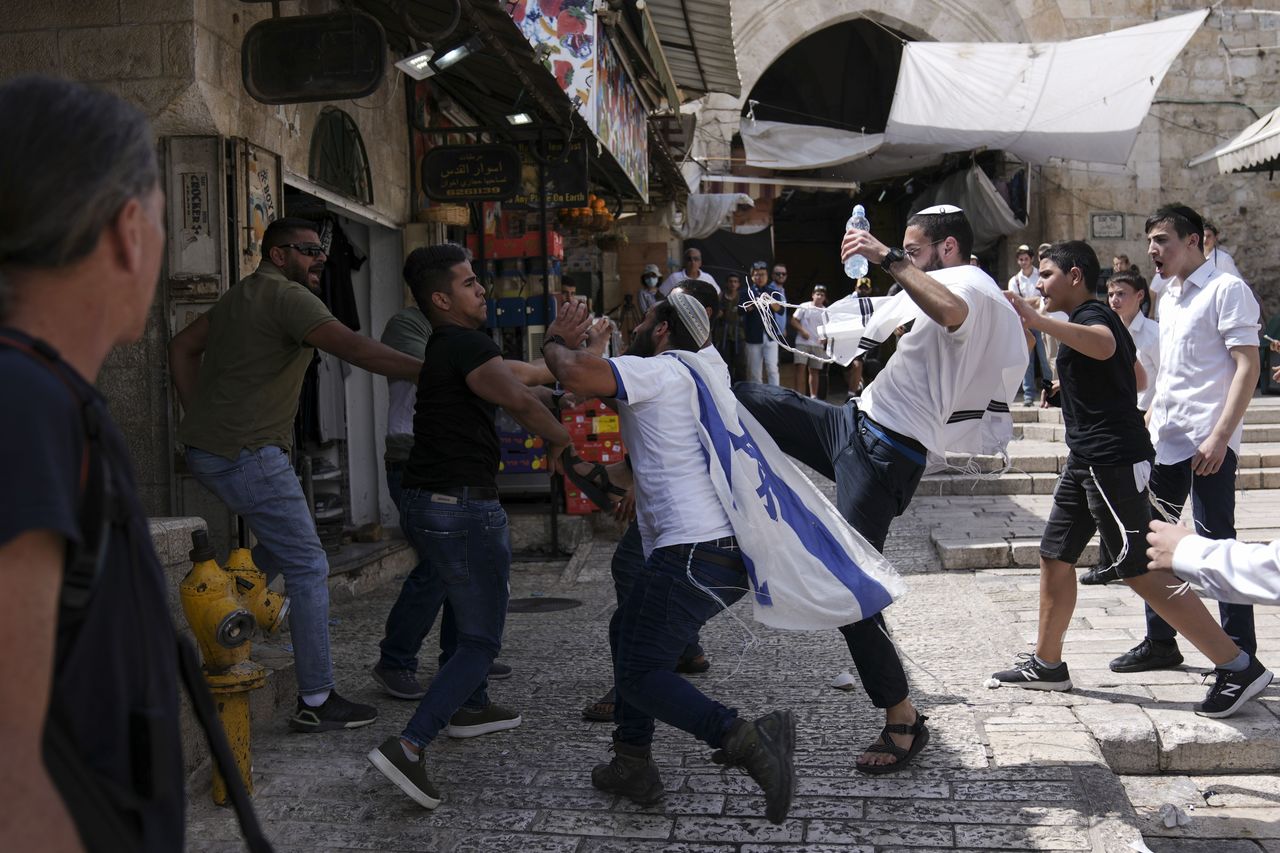 Jewish crowd chanted racist slogans against Palestinians which led to a confrontation in the old city. 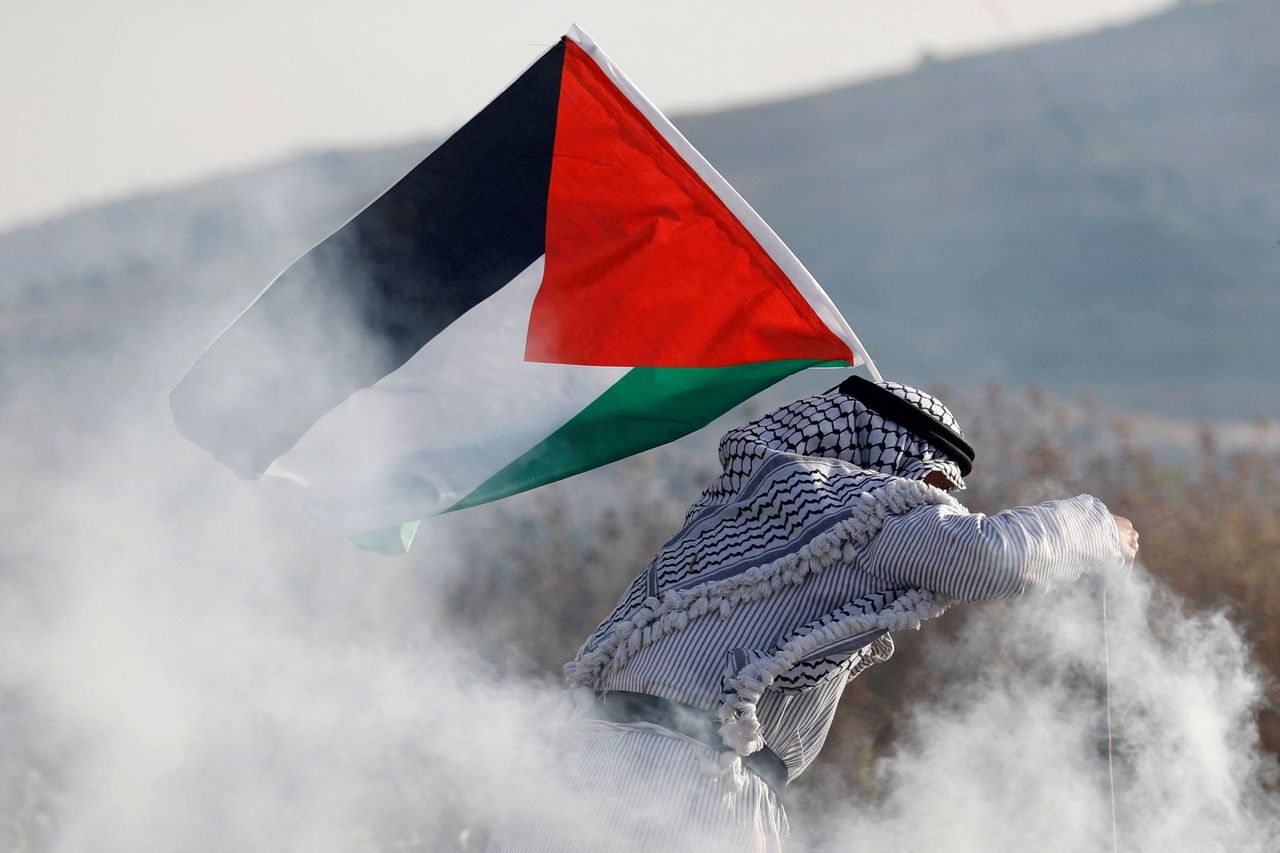 A Palestinian holds a flag during a protest over tensions in Jerusalem's Al-Aqsa Mosque, at Hawara checkpoint in the Israeli-occupied West Bank