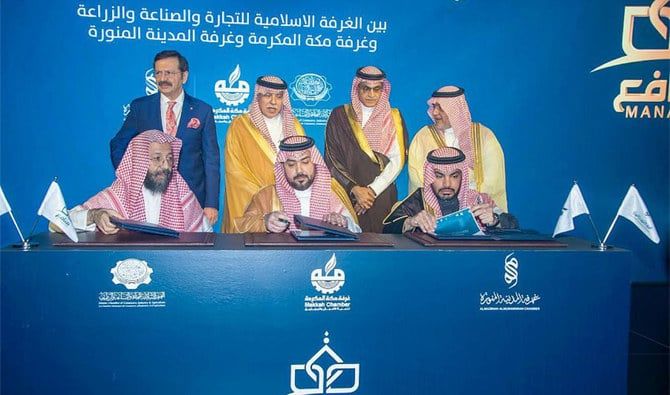 Al-Qasabi said he was satisfied with the tripartite partnership, which includes nine plans adopting qualitative initiatives, such as the World Halal Forum, the World Entrepreneurs Forum in Makkah, along with five discussion sessions with worldwide business leaders, among other distinguished initiatives.

“Saudi Vision 2030 holds the title ‘The Arab and Islamic Depth,’ a pioneering investment force and an axis for connecting three continents,” said Kamel.

“We were inspired by the vision to establish the Manafea partnership — composed of a group of initiatives related to Makkah and Madinah — as follows: Exploiting the sacred status of the Two Holy Cities at the global level and transforming them into a hub for business events and a platform for the knowledge and creativity related to the Islamic world and practices,” he said.

“Our ambition is not limited by the nine plans included in the program. There are other commitments related to important studies, ambitious strategic projects, and we figured we needed to delve into their studies before launching them, including the study ‘Made in Makkah’, which could be a global free zone,” he added.

Furthermore, it is important to establish a permanent exhibition of the Islamic countries’ products and services.

“These two initiatives have a global dimension in line with the Vision 2030 and are complementary to dozens of initiatives related to the Two Holy Mosques,” he added.

Bin Saad also referred to Vision 2030 for a bright future.

“Today, we are proud that we are on the verge of a new global stage represented by this partnership from a real, diverse and attractive platform that will contribute to a qualitative shift in terms of civilization, heritage and urban areas for Makkah and Madinah,” he said.

Secretary-General of the Makkah Chamber Ismat Abdulkarim Maatouk said that the forum represents a platform to stimulate the intra-trade ratio of Islamic countries, and aims to enhance trade and investment between them and push the economic activities in the holy cities.

He added: “The Saudi government has provided many facilities and legal frameworks dedicated to creating an ideal climate for investments. As for Makkah, the data indicates that this year will witness an increase in the number of pilgrims by 30 percent compared to last year. The number of pilgrims is expected to reach 2.5 million, with 1.7 million foreign pilgrims and 850,000 local pilgrims, according to a recent and specialized study prepared by Makkah’s Chamber of Commerce.

“The accommodation capacity of residential units and hotels licensed to house pilgrims is estimated at approximately 3.3 million pilgrims, depending on the construction developments. This season, we need about 66,000 buses and cars to transport pilgrims, and the estimated revenues of the current pilgrimage season are approximately SR23 billion ($6.1 billion).”

These figures are just examples of the huge investment opportunities that are available during the Hajj season, he said, pointing out that successful partnerships can be established between various parties to create exemplary cooperation among investors.
Add Comment