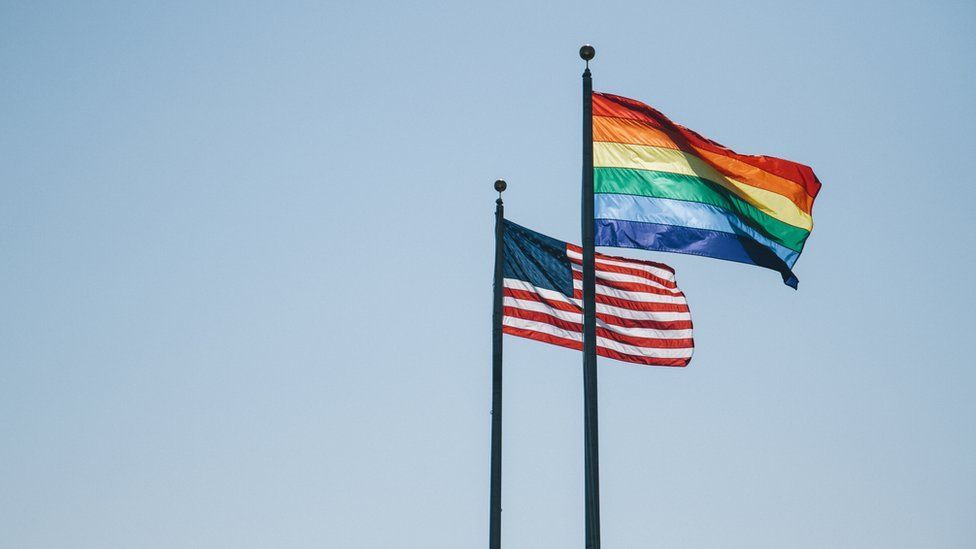 Kuwait has summoned a top US diplomat in protest over tweets from the American embassy supporting LGBT rights, its foreign ministry says.

US officials there had posted a rainbow flag and message of solidarity from President Joe Biden for Pride month.

But Kuwait officials criticised the embassy for "supporting homosexuality" and demanded it didn't happen again.

Rights for LGBT people are severely restricted in Kuwait and it is illegal there for men to be gay.

In a pair of tweets published in English and Arabic on Thursday, the US Embassy in Kuwait quoted President Biden as saying all humans "should be able to live without fear no matter who they are or whom they love".

The post, published to mark the beginning of Pride Month, appeared with a picture of a rainbow flag symbolising LGBT rights.

Hours later, Kuwait's Foreign Ministry said it rejected what had been published and had summoned the US Charges d'Affaires James Holtsnider to hand him a memorandum condemning the posts.

According to its statement, the Foreign Ministry ordered the embassy to respect Kuwaiti laws and "not to publish such tweets".

Kuwaiti officials accused the embassy of violating international conventions requiring diplomats to "respect the laws and regulations of the receiving state".

Many conservative Kuwaiti Twitter users responded with similar outrage to the US embassy's Pride post, including MP Osama Al-Shaheen who wrote: "The behaviour of the American embassy is unacceptable."

"Foreign embassies must respect the public order of Kuwait and its official religion," he added.

Another Kuwaiti social media user accused US officials of "imposing a diseased and decadent culture on our conservative Muslim society".

Rights for LGBT people are extremely limited in socially conservative Kuwait - one of 69 countries in the world where being gay is criminalised.

According to the Gulf state's penal code, men who have same-sex relations can be punished by up to seven years in prison.

Until this year, it was a criminal offence in Kuwait to be a trans person. A court has now overturned the law as unconstitutional.

A US State Department spokesperson told the BBC: "The United States proudly advances efforts around the globe to protect all individuals, including LGBTQI+ persons, from violence and abuse, criminalization, discrimination, and stigma, and to empower marginalized populations and local civil society, including the LGBTQI+ community."