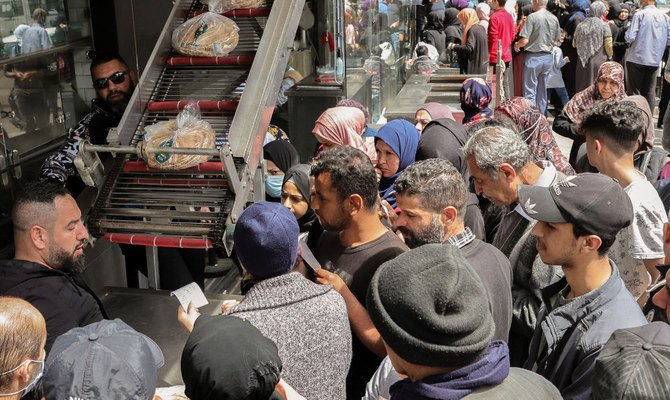 Angry citizens on Wednesday stormed bakeries and pastry shops in Lebanon as the country’s food crisis deepened.
Long queues formed outside many stores with residents waiting impatiently in searing heat for subsidized bundles of bread. As stocks and tempers ran short, many people opted to buy other bakery products, some priced at 40,000 Lebanese pounds ($1.5) for 10 thin loaves.

Others vented their frustrations by taking to social media platforms, blaming politicians and bakeries for the problem while slamming mafia organizations for selling subsidized flour on the black market and smuggling it to Syria.

In some places, soldiers were forced to intervene, removing protesters from shops, and defusing heated arguments between queueing customers.

Lebanese Economy Minister Amin Salam said: “Around 49,000 tons of wheat are expected to arrive in Lebanon by the end of this week. Hopefully the ships will arrive faster. The crisis is the result of flour being stolen from our country.

“A crisis cell headed by the economy ministry will be formed and a new mechanism will be set up for distributing wheat and flour fairly, and prosecuting those creating the crisis.”

Lebanon’s inability to secure US dollars to continue subsidizing medicines, wheat, and fuel, on Wednesday resulted in petrol prices rising by 14,000 Lebanese pounds to reach 617,000 pounds per 20 liters.

Georges Brax, a member of the gas station owners’ syndicate, said: “The central bank used to secure 100 percent of the US dollars needed to import fuel, according to its Sayrafa platform rate. Now it provides only 85 percent. The remaining 15 percent needs to be secured based on the black-market rate.”

Fadi Abu Shakra, a representative of the union for fuel distributors and gas stations in Lebanon, said: “We keep going backward. If the issue is not resolved, I don’t know where we could be heading.”

At its Wednesday meeting, a ministerial committee set up to address the repercussions of the financial crisis on public facilities and headed by caretaker Prime Minister Najib Mikati, reiterated its previous recommendations to meet the demands of public sector employees, who have been on strike for more than a month, pending the approval of the 2022 budget and avoiding any burden on the state treasury.

The committee approved granting additional financial assistance equivalent to the value of a full salary and a daily transportation allowance of 95,000 pounds, provided that employees attended work for a minimum number of days a week.

Those failing to turn up for work, without justification, for a period of 15 days, were warned that they would be “considered resigned.”

Caretaker Minister of Finance Youssef Khalil said: “The proposal provides for a daily lump-sum productivity allowance for employees and workers in the public administration, ranging between 150,000 Lebanese pounds and 350,000 pounds per day, provided that the beneficiary is present at least three days a week, every week during official working hours.”

He added: “The ministry drew up a decree in this regard and signed it and transferred it to the PM for it to come into effect.”

Meanwhile, US Ambassador to Lebanon Dorothy Shea urged the country’s leaders to hold presidential elections on time and press ahead in carrying out reforms that would satisfy the World Bank and meet the requirements of the International Monetary Fund.

And she highlighted the importance of securing cheaper and cleaner energy and electricity for schools, hospitals, and factories.
Add Comment