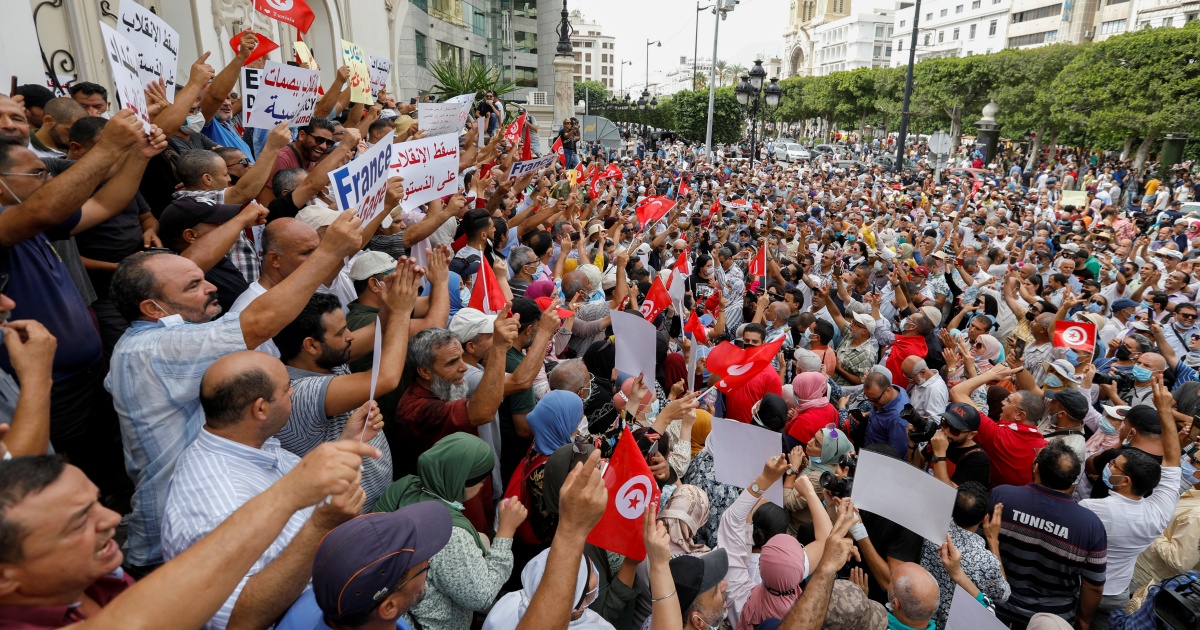 Hundreds of Tunisians rallied in the capital on Friday to mark the 11th anniversary of the uprising that unseated former President Zine El Abidine Ben Ali, defying a ban on public gatherings imposed by the government to counter the rapid spread of COVID-19.

The ban came just two days before demonstrations called by major political parties and national figures against the exceptional measures President Saied took on July 25 – a move decried by critics as aimed at stopping the protests.

On what had been Revolution Day until last year – now officially observed on December 17 as decreed by the president – groups of protesters gathered in various locations across central Tunis after security units blocked all main roads leading to Habib Bourguiba Avenue, the renowned focal point of the 2011 revolution.

“The political elite is trying to state its presence in the public sphere in an act of resistance against the president’s intent to monopolise the political process,” Tarek Kahlaoui, a Tunisian political analyst, told Al Jazeera following Friday’s demonstrations.

On Mohamed V Avenue, partisans of the moderate Islamist Ennahdha party assembled alongside members of the Citizens against the Coup campaign.

The Ennahdha movement, which held the largest number of seats in the now-frozen parliament, has been at the lead of the opposition parties protesting the suspension of parliament by Saied, his seizure of governing powers, and plans to amend the constitution, which they call a coup. Those measures were reinforced by a presidential decree on September 22.

“We are not ready to go back to a monopoly of all power, to be under one-man rule or one-party governance,” a leading member of Ennahdha, Gafsi, who did not give his real name, told Al Jazeera at the rally on Mohamed V.

“We won’t give up the political freedoms we gained from the revolution,” he added, slamming Saied’s concentration of decision-making power and control over the judiciary.

Gafsi embraced his party’s call for a comprehensive national dialogue to resume democratic life and conclude a common ground, suggesting it is the only way out of the political standoff.

“The shortcut to get out of this crisis is the return to democracy,” a protester named Montassar gathering in the same crowd said. “The revolution is in the making, we continue to walk through the transitions slowly but surely.”

The Citizens Against the Coup initiative, which includes members and supporters of Ennahdha party as well as politicians and human rights advocates, had announced they would hold protests from December 17 until January 14 to demand an end to the emergency measures and a return to democracy.

The collective also demanded the resumption of parliamentary work, a defence of the constitution, preservation of rights and freedoms, and setting a date for early legislative and presidential elections.

Political activist and constitutional law professor Jaouhar Ben Mbarek, coordinator of the anti-coup campaign, declared at a press conference on Thursday that meetings were held in an effort to “form a united democratic national front to fight the coup”.

Ridha Belhaj, a lawyer and member of the campaign’s executive committee, said following Friday’s rallies that the wide rejection of Saied’s decisions, the heavy security presence, and brutal methods used against demonstrators will mark a “turning point”.

“A large opposition front will come into being to fight this authoritarian drift, especially as the economic and social crisis deepens, increasingly isolating Kais Saied,” said Belhaj.

In the past few days, Citizens Against the Coup launched preliminary talks with various parties with the goal to build a political front.

Its proposed plan consists of returning to constitutional rule and is premised on restarting parliament’s activity – even if only on a temporary basis. That would in turn enable it to undertake political reforms such as changing the parliamentary electoral law, establishing a constitutional court, and preparing new elections, Belhaj explained.

Simultaneously, he continued, a national debate with all the relevant forces in Tunisian society should be opened to discuss the much-needed economic and social reforms.

Saied has repeatedly vowed to organise a national dialogue over the past months, though he has yet to deliver so far.

“The big problem since the revolution is this mismatch between the people’s socioeconomic demands, unfulfilled until today, and the pursuit of neoliberal policies that has continued post-2011,” Belhaj said.

“This is the time for the political class to reflect on the mistakes made in the past 11 years and move forward on new terms.”

The Workers’ Party held its own rally outside the Central Bank to commemorate the revolution’s anniversary in a symbolic choice “to condemn the continuation by Najla Bouden’s government of the same financial policy which harmed the people and the country”, Secretary-General Hamma Hammami stated.

Standing outside the bank’s premises, Jawaher Channa, an activist affiliated with the party, expressed firm opposition to both the president’s power grab and a recovery of the political establishment led by Ennahdha and its allies.

“The exit way, as we see it, is the creation of a progressive, revolutionary axis capable of leading the next phase”, Channa articulated to Al Jazeera, indicating the focus should be placed on economic and social rights, where all governments have failed to date.

The long-promised roadmap unveiled by Saied last month involves a constitutional referendum, to be held on July 25, following an online public consultation between January and March, and parliamentary elections in December of this year.

According to Kahlaoui, the main test is whether opposition forces will go with the president’s plan and fight it from within, or impose their own. He questioned if they will be able to counter Saied effectively and propose a viable alternative plan to exit the current crisis.

In his view, the political elite should operate “within the framework of the existing roadmap” while focusing on Tunisia’s social and economic priorities.

“It would be more realistic to get through the announced plan to then find real opportunities for rebalancing power with Saied, and move on to ensuring the restoration of the country’s institutions and functioning of democracy at the least,” Kahlaoui argued. “That’s the way forward.”

He said the real “change-maker” is how the president will address the socioeconomic dossier and if he will be in a position to limit the possible mobilisation of social movements, in line with the degradation of the economic and social conditions.

He added Tunisia’s powerful General Labour Union (UGTT) is being careful in avoiding an open fight with President Saied.

UGTT’s Secretary-General Noureddine Taboubi criticised the president’s roadmap in December saying it does little to tackle the country’s social and economic woes.

“Until when are we going to discuss the constitution? People today have empty stomachs and are getting poorer,” said Taboubi. He added the union supported Saied’s July 25 moves but “didn’t give [him] a blank cheque”.

In a statement issued on Friday, the UGTT called for dialogue with the participation of the different national forces to act in accordance with the law and the protection of rights and freedoms.

Although Saied’s actions in July continue to receive support within the Tunisian population, the president has lost some of his popularity as growing opposition has become more openly critical of what it views as an autocratic trajectory.