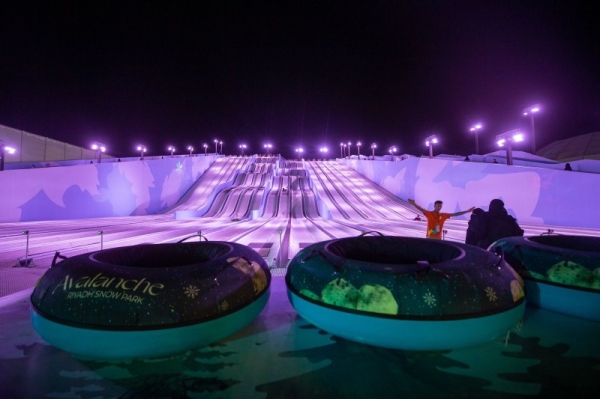 The Riyadh Season received two Guinness Book of Record certificates for the current season.
Turki Al-Sheikh, head of the General Entertainment Authority, tweeted on Thursday that the Riyadh Season entered the Guinness Book of Records with obtaining two international certificates for Avalanche located at the Boulevard Riyadh City zone. Avalanche is the tallest fun slide and the fun slide with the most lanes as per the Guinness record. At a record length of 22,136 meters, the Avalanche has 24 lanes, holding the record of having the most lanes on a fun slide.

Al-Sheikh said in his statement on the Twitter account: “As an extension of breaking the Guinness World Records in the last Riyadh Season, the Season 2 received the first two certificates from Guinness in the current season.” The Riyadh City Boulevard (BlvdRuhCity) zone activities, the most important entertainment destination at the Riyadh Season, opened its doors on Monday, Nov. 1 to visitors.

Located in the northern part of Riyadh, BlvdRuhCity is the largest event area and an exceptional project built by Saudis, as per the best standards that make it the top destination for Riyadh visitors. BlvdRuhCity will remain open to visitors daily from 05:00 p.m. until 4:00 a.m., seven days a week. The total area of the zone has seen a threefold expansion in its area compared to the previous season, amounting to around 900,000 square meters, making it the largest entertainment facility in the region. It was built as per the highest specifications, in addition to its luxurious restaurants, cafes and a state-of-the-art dancing fountain.

It consists of nine areas, each with its own set of events, restaurants, cafes, gardens, international game centers, festivals and stores designed for all tastes and ages, namely the fountain area, which offers different displays of laser lights, colors and music that are synchronized with the fountain show.

The zone will host international events for the first time in the world, in addition to the largest cinema in the Middle East, which contains 25 high-quality screens where the latest films will be shown before their debut in international cinemas, in an area of around 22,280 square meters. It is noteworthy that the activities of the Riyadh Season continued to bring many surprises that fascinate visitors and fans from all over the world. The season managed to attract more than one million visitors during the first weeks of its launch.
Add Comment