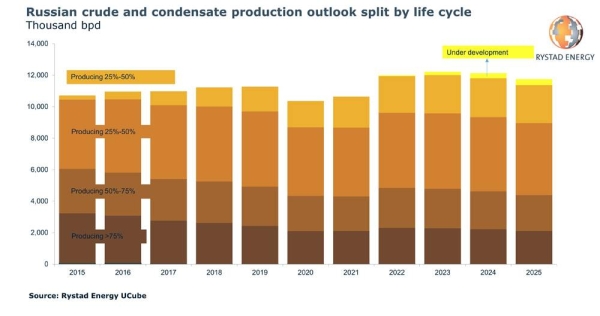 The OPEC+ coalition’s recent agreement to steadily raise oil production is paving the way for Russia to slowly shrug off COVID-19 curtailments.
The country is on track to set a new monthly crude and condensate output record of 11.6 million barrels per day (bpd) already in July 2022, a Rystad Energy analysis reveals. Russia’s oil machine will then accelerate further to a peak of almost 12.2 million bpd in mid-2023.

Russia’s current monthly oil and condensate production record was set in December 2018 with 11.5 million bpd. Rystad Energy’s projections point to 2023 as a peak year also at an annual production level, expected at 12.16 million bpd. The country’s short- and medium-term production growth will be driven by Rosneft and Gazpromneft’s greenfield projects.

Russia is also expected to set new records for crude oil alone. Its existing monthly record of 10.7 million bpd from April 2020 will be matched by May 2022. Crude production will keep rising to a peak of 11.3 million bpd in mid-2023, before starting to decline.

“Russian production will rise from relatively new fields — fields with early production and producing fields with 25% to 50% depletion rates. Operators will not be able to increase production from mature fields, as it will be difficult and expensive to bring back online wells that were shut to comply with OPEC+ output cuts,” said Daria Melnik, senior analyst at Rystad Energy.

After negotiations failed in early July, the OPEC+ group reached an agreement in mid-July to raise output by 400,000 bpd each month, starting from August 2021 to the end of 2022. The baseline production level for Russia has been revised to 11.5 million bpd, an increase of 500,000 bpd from the previous reference production. It should be noted that the country’s crude oil production has never surpassed the 11 million bpd mark.

Rosneft alone will contribute more than half of Russia’s spare capacity. The company’s greenfield projects will add around 250,000 bpd by 2022 and about 380,000 bpd by 2025. The operator is pressing ahead with its greenfield development plans and is on track with key oil projects.

Gazpromneft will be the second-largest contributor to Russia’s liquids production growth in 2022, with greenfield projects as the driving force. By 2025, about 40% of Gazpromneft-operated production will come from early producing fields and projects that are currently under development, with the share in total output of the latter reaching 7%.

Other Russian operators — including Lukoil, Surgutneftegas and smaller players such as Bashneft and Russneft —have less diversified portfolios than Rosneft and Gazpromneft, with a low portion of greenfield projects. They are therefore not expected to contribute much to countrywide liquids production growth.

In Rystad Energy’s base case, liquids production from smaller operators will bounce back to pre-Covid levels after the full phase-out of OPEC+ production cuts. Output will not exceed these levels as these companies have few greenfield developments in their portfolios.
#covid 19  #covid
Add Comment