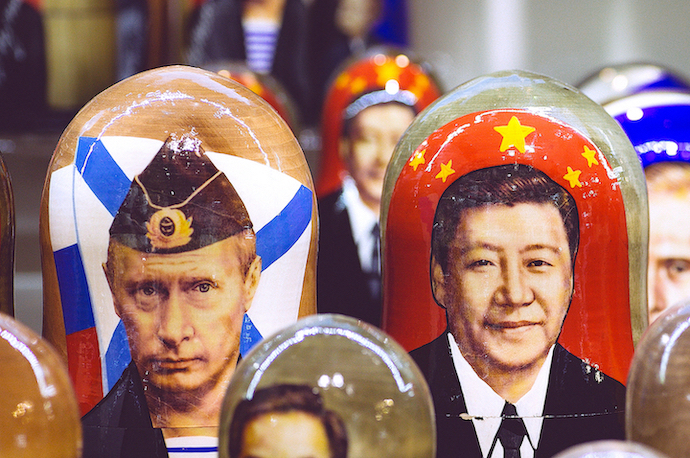 Russia seeks alliance with China to beat US sanctions

Russia and China presented a united front against America yesterday as they discussed ways of resisting western sanctions after clashes with the Biden administration.
Sergey Lavrov, the Russian foreign minister, on a visit to meet his counterpart Wang Yi in China, spoke of efforts to build “technological independence” and bypass western financial systems.

Moves towards greater co-operation between the countries come at a time of renewed superpower jousting after uncompromising talks between senior Chinese and US officials, and barbs between Presidents Biden and Putin.

The Biden administration is building an alliance to oppose Chinese ambitions in the Indo-Pacific region, and also seeking to bolster western resistance to Russian and Chinese misconduct.

Biden said that Moscow would “pay a price”, with new sanctions expected as soon as this week for interfering in last year’s US elections. Yesterday the EU imposed measures on four Chinese officials accused of repressing Uighur Muslims, provoking swift retaliation.

In a separate flashpoint, the French foreign ministry said last night that it had summoned China’s ambassador in a row over a proposed visit by French senators to Taiwan. It accused Lu Shaye of “insults and threats toward lawmakers and a French researcher” and said that it would remind him of the “elementary rules as set out by the Vienna Convention on diplomatic relations”.

Antoine Bondaz, a researcher at the Foundation for Strategic Research in Paris, had been denounced by the Chinese embassy as a “small-time criminal” and an “ideological troll” after he accused it of putting pressure on the senators to cancel the visit. The embassy denounced its critics in the media and academia as “mad hyenas” and promised to fight them “tooth and nail”.

Lavrov, who has previously called for moves to undermine the dollar, said that Russia and China were working together in the interests of humanity. “These objective developments, which are leading to the formation of a truly multipolar and democratic world, are unfortunately being hindered by western countries, particularly the United States,” he said as he arrived in China.

“We need to reduce sanctions risks by bolstering our technological independence, by switching to payments in our national currencies and global currencies that serve as an alternative to the dollar. We need to move away from using international payment systems controlled by the West.”
Add Comment