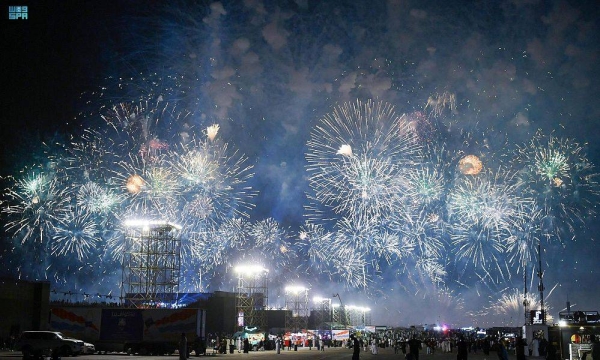 After Vision 2030 was unveiled, many noteworthy achievements have been made to support the Kingdom’s economic diversification objectives and build a prosperous future for the people of Saudi Arabia. This year was filled with remarkable successes across the vision's three pillars; a Vibrant Society, a Thriving Economy and an Ambitious Nation.

JEDDAH — The festival was a sign of the metamorphosis of the cinema of the Arab World and Saudi Arabia. Hosted at the old town of Al Balad in Jeddah, RSIFF brought together local film lovers, filmmakers, and international industry leaders with the goal of opening new opportunities for filmmakers of the region.

The festival provided a space for a generation of Saudis interested in film and gave them access to industry professionals and experts through workshops, special screenings, panels and masterclasses. The experience helped them enhance their knowledge about film production, financing and distribution, and connected with production companies.

The festival also delivered a program of diverse, entertaining, and thoughtful films showcasing the best in cinema from around the world, emphasising films from emerging regions, including the Middle East. Including a broad range of genres and styles of documentaries, narratives, shorts and animations, and immersive technologies.

RIYADH — The annual event in Riyadh this year was jointly organized for the first time by the Culture Ministry and the Literature, Publishing and Translation Commission. In the past, this task was the responsibility of the Ministry of Media. The venue of the exhibition had also been changed to Riyadh Front.

The event aimed at encouraging global partnerships and trade, and establishing Saudi Arabia as a publishing and literary hub. The book fair played a great role in delivering a unique cultural experience, raising awareness of the many benefits that reading and literature bring.

The celebration hosted 1,000 publishing houses, 28 of which were international ones, in addition to readers from all over the world. All of which produced a variety of activities including cooking shows, cultural exhibitions, Interactive games, children’s booths, as well as reading stations.

DIRIYAH — The event was the first Contemporary Art Biennale in Saudi Arabia. It was held by Diriyah Biennale Foundation (DBF) in the JAX district of Diriyah. DBF’s slogan for the event, “Crossing the River by Feeling the Stones” was meant to reflect the social, cultural and economic transformation happening in the Kingdom.

The exhibition aimed at cultivating an interactive art experience by bringing together local and international artists in a celebration of contemporary culture, and an accessible and engaging platform for all. In addition to exposing new generations of viewers to global contemporary art as a mode of visual expression and a space for critical thinking.

The venue accommodated more than 60 international and local artists who exhibited their work. Over 40 percent of the displays belonged to 27 Saudi artists. The biennale included six sections examining themes such as: memory and preservation, cultural transmission, social engagement, the Anthropocene, and the spiritual.

JEDDAH — Formula 1 STC Saudi Arabian Grand Prix was the biggest sporting event ever hosted in the Kingdom. It was held at Jeddah Corniche Circuit; the world’s fastest track in 2021 with a staggering average speed of 252.8km/h. The organizing was a collaborative effort of the Sports and Culture Ministries and other entities.

The Formula was a huge moment for Saudi motorsport fans since this sport did not get much recognition before, if not all. The event also proved the Kingdom’s ability in delivering such important international events, managing and organizing them to the highest standards for our fans and growing young population.

RIYADH — The Saudi Arabian Football Federation (SAFF) launched this year the first edition of the Saudi Women’s Football. This event led to Saudi Arabia ranking second in the Arab World region and 24th worldwide in the Global Soft Power Index 2021.

The launch was an important step into advancing and promoting women’s football and taking it to the highest levels, and an effort that will proceed at a steady pace from here on after according to an ambitious strategy to drive this transformation in which we all share its passion, ambition and determination.

The participation consisted of 16 teams from different cities, and their matches were held (Riyadh, Jeddah, Dammam). The top winning places then got qualified for the one-match knockout system in the Kingdom Final Championship to be held early next year in Jeddah at King Abdullah Sports City Stadium.

RIYADH — The event represented the latest development for the Fashion Commission as they continue to spearhead the growth of the Kingdom’s fashion sector. The Riyadh fashion swap event marked the first time that the GFX has visited Saudi Arabia; showcasing the Kingdom’s vision for promoting a forward-thinking fashion industry that is built upon the foundations of sustainable development.

Hosted at the Personage concept store, GFX aimed at facilitating the exchange of gently used, pre-loved fashion items within a dynamic in-store recycling experience. In addition to empowering people to take positive action and support the conservation of the environment whilst actively participating in recycling and upcycling of fashion items.

ALULA — The very first music and cultural festival in the Kingdom, Winter at Tantora, has returned to AlUla with a new six-week format as the first of a four-festival plan to offer the best ways to enjoy the Saudi culture through curated experiences of art, culture, music, nature, wellness, equestrian, gastronomy and astronomy.

The festival delivered an emotional and elegant east meets west experience to locals, residents and visitors alike, and will be rooted in the history and heritage of Arabia. The domestic tourism scene continues to grow and Al Ula is and will always be a big part of it.

The event featured an exciting mix of Arabic artists like Abdulrahman Mohammed, Omar Khairat, Magida El Roumi and Hiba Tawaji, as well as some international names like Andrea Bocelli. Other immersive experiences included theaters offered by the new Cinema El Housh and performances such as the Traveller Ibn Battuta.

RIYADH — The Riyadh Season received two Guinness Book of Record certificates for being the largest entertainment event in the Middle East. Supervised by Turki Al-Sheikh, chairman of the Board of Directors of the General Entertainment Authority, the event created more than 122,000 jobs and drew over 8 million visitors within two months.

The festival aims at boosting the entertainment scene to new international levels while simultaneously highlighting the artistic and authentic features of the Kingdom through visual presentations that narrated cultural and historical stories. The event also took great efforts in providing for and meeting the needs of all segments of society.

The Season consists of 7,500 astounding events and fun-filled activities amassing across 14 entertainment zones like Zaman Village, Nabd Al Riyadh and Al-Salam Tree. In addition to the launch of all-age international games, musical performances, retail areas for shopping, popular dishes and a display of fashion representing various regions of the Kingdom.