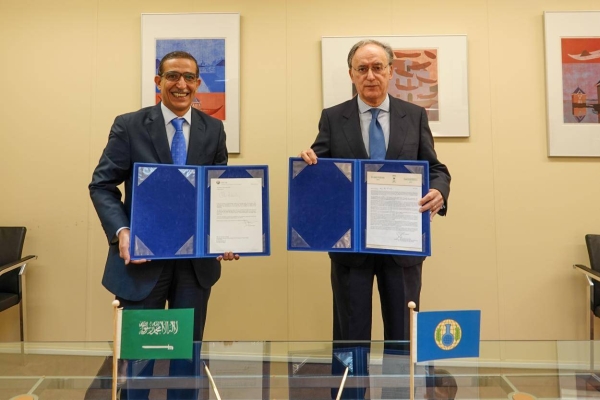 Saudi Arabia has contributed €50,000 to a special Trust Fund of the Organisation for the Prohibition of Chemical Weapons (OPCW) to support the construction and operation of a new facility, the OPCW Centre for Chemistry and Technology (“ChemTech Centre”).
The contributions were formalised on Thursday during a ceremony between the Permanent Representative of the Kingdom of Saudi Arabia to the OPCW, Ambassador Ziad M.D. Al Atiyah, and the Director-General of the OPCW, Fernando Arias.Ambassador Al Atiyah stated: “The Kingdom of Saudi Arabia is delighted to contribute €50,000 to the new OPCW Centre for Chemistry and Technology. The Kingdom has always been proactive in contributing to any effort that would enhance international cooperation."

"This contribution is a symbol of the Kingdom’s consistent policy and desire to strengthen cooperation as part of the efforts to prohibit chemical weapons and weapons of mass destruction and prevent their proliferation, and to enhance international peace and security, in compliance with the Chemical Weapons Convention."

"In this context, the new Centre for Chemistry and Technology, whose first pillar was recently celebrated, will constitute a turning point in the course of the Organisation’s work, and it will be a key bridge to achieve aspirations, especially in technology transfer and technical assistance to the States Parties, and a beacon of science and knowledge in the field of chemistry.”

The Director-General expressed: “The Government of Saudi Arabia has my sincere gratitude for its contribution which brings us closer to realising this important project. The new Centre will strengthen the OPCW’s scientific and technological capability and allow us to meet with confidence 21st century chemical disarmament challenges.”

Director-General Arias additionally expressed his gratitude to the OPCW States Parties and other donors who supported the project and encouraged continued participation in this important initiative.

He further emphasised the important role the new ChemTech Centre will play in strengthening the OPCW’s ability to address chemical weapon threats and enhance capacity building activities to the benefit of all 193 OPCW Member States.

The ChemTech Centre Trust Fund remains open for further contributions. Additional funds will provide extra assurances for the successful completion of the project and for international cooperation projects to be carried out at the Centre once the building is operational.
Add Comment