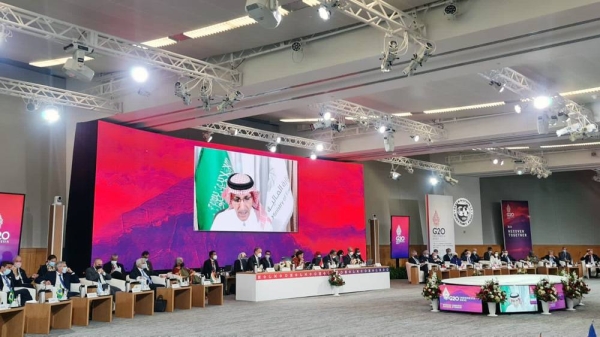 Minister of Finance Mohammed Al-Jadaan said that he is expecting stronger-than-expected growth this year in the non-oil sector underpinned by the structural reforms under Vision 2030.
Al-Jadaan, headed the Kingdom’s delegation in the Spring Meetings of the International Monetary Fund (IMF) and World Bank, held in Washington, DC, from April 19-24, 2022.

In his statement to the International Monetary and Financial Committee (IMFC) of the IMF, delivered by the governor of the Saudi Central Bank on his behalf, he welcomed the managing director's Global Policy Agenda and expressed his appreciation to the former chair and welcomed the new chair.

He stressed that the disruptions from the pandemic are still with us, and we need to continue working together to address these disruptions.

Regarding global policy priorities for the coming period, He stressed that in these challenging times, the Kingdom continues to support international efforts to restore peace and macro-stability and alleviate the humanitarian sufferings, including in Ukraine. The minister highlighted that KSA ranks 3rd among the world’s top donors in global humanitarian assistance, according to the 2021 UNFTS.

Regarding Global Policy Agenda, Al-Jadaan underscored that multilateralism is becoming more important now than ever to help the world overcome the rising challenges while safeguarding economic integration.

He strongly emphasized the importance of prudent climate policies to ensure stable energy market conditions and just transition to greener economy that are necessary for global economic stability.

In that regard, he reiterated Saudi Arabia’s commitment to achieving the Kingdom goal of reaching net-zero emission by 2060 through the framework of Circular Carbon Economy.

On Saudi economy, he confirmed that the Kingdom remains committed to prudent policies to maintain monetary and financial stability and preserve a strong fiscal position, while accelerating structural reforms to further enhance resilience against external shocks.

Al-Jadaan also participated in the Development Committee of the World Bank Group where he flagged the importance of the IMF and WB joint work to tackle global economic setbacks stemming from the recent geopolitical tensions and the ongoing COVID-19 pandemic.

He strongly emphasized the important role of the two institutions to support low-income countries, noting the need for enhanced collective efforts to accelerate international support to these countries.

He also highlighted that the COVID-19 pandemic has profoundly impacted the global economy over the past two years — and it is not over yet.

He highlighted that the continued spread of the virus could give rise to even more contagious variants; prompting further disruptions to the global economic recovery and therefore, members should continue to boost vaccinations everywhere, especially in low-income countries.

On the growing food insecurity issue, he urged the WBG and IMF to provide a swift emergency response to food insecurity facing client countries in the MENA region and elsewhere.

On debt vulnerabilities in low-income countries, he called on the WBG and the IMF to redouble their efforts, given the increasingly complex challenges facing low-income countries noting the importance of paying heightened attention to debt-related issues.

He noted that the G20 Common Framework (CF) now offers an opportunity for a more enduring treatment of debt vulnerabilities in LICs and encourage the IMF and WBG to engage closely on this important initiative to ensure that the CF works as an effective platform for debt treatments.

Regarding digitization and its contribution to development, Al-Jadaan highlighted that the COVID-19 pandemic has provided both the push for, and demonstrated the importance of, the use of digital technologies.

He shared that the Kingdom was ranked second among all G20 members on its “Top Digital Riser” list, which is an important recognition to the comprehensive government support for digital transformation.

He also noted that the Kingdom has also been recognized by UN International Telecommunication Union for its adoption of best policies, regulations, and transparent arrangements that support the digital economy, stimulate investment and innovation, and contribute to achieving the SDGs.
#COVID-19  #Covid
Add Comment