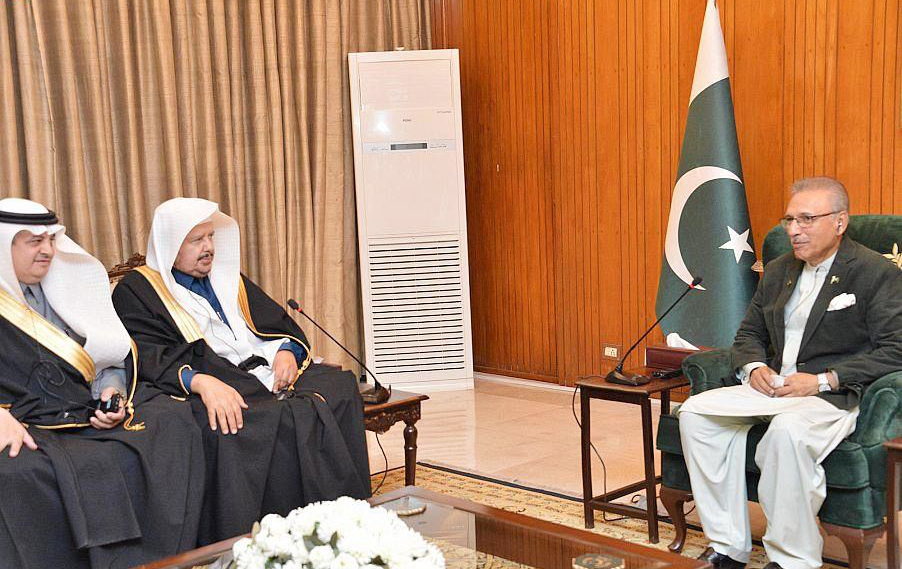 Pakistani President Dr. Arif Alvi has stressed that the people of Pakistan fully believe that the security of Saudi Arabia is their responsibility and duty, noting that Pakistan will never hesitate to fulfill this responsibility whenever it is needed.
His comments came during a meeting with Saudi Shoura Council Speaker Sheikh Abdullah Al-Asheikh at the Presidential Palace in Islamabad on Friday.

During the meeting, Alvi valued the sincere stances and great support to Pakistan offered by King Salman and Crown Prince Mohammed bin Salman, and their solidarity with Pakistan in all issues that concern it.

Al-Asheikh and his delegation visited Pakistan and met with a number of high-ranking Pakistani officials, including National Assembly Speaker Asad Qaiser.

Alvi praised the huge developmental transformations in the Kingdom in light of the Vision 2030 reform plan, pointing out that the crown prince has a sharp vision for the future, expressing his admiration for the establishment of the city of NEOM and the other unique gigaprojects, wishing the Kingdom more prosperity, development and progress.

He noted the great role played by the Kingdom to help achieve security and stability for the Afghan people, and find solutions for the situation in Afghanistan, stressing that the security of the country is essential for the stability of the region and the whole world.

He also praised the huge efforts made by the crown prince to hold the extraordinary session of the Council of Foreign Ministers of the Organization of Islamic Cooperation, which was called by the Kingdom and hosted by Pakistan to discuss the humanitarian situation in Afghanistan. Alvi praised the Kingdom for all that it contributes to improving the situation in the Islamic world.

Alvi stressed the importance of bilateral work and cooperation at the legislative level between the Shoura Council and the National Assembly of Pakistan, noting that this visit will contribute to achieving the joint interests of the two countries.

Al-Asheikh praised the distinguished relations and strong ties between the Kingdom and Pakistan at all levels, stressing that these relations have the full support of the leaderships of both countries.

The meeting tackled a number of issues of common concern between the Kingdom and Pakistan, and reviewed the economic, investment, and parliamentary cooperation between the two countries and ways to strengthen them to boost the Saudi–Pakistani partnership.
#Afghanistan
Add Comment