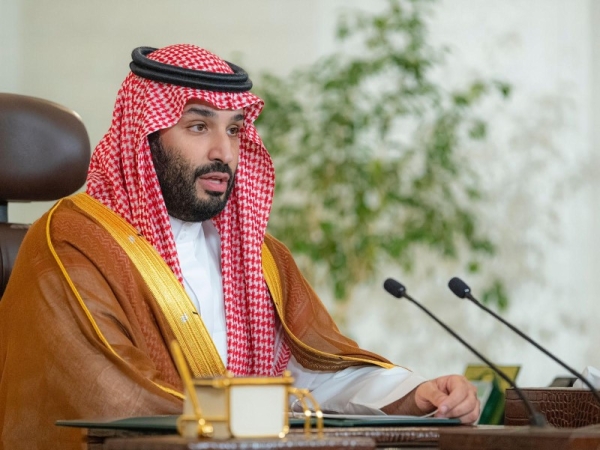 “We announce in this Forum, Saudi Arabia's road map for protecting the environment and confronting climate change. This annual forum will serve as a platform to launch our new environmental initiatives and monitor the impact of the previously announced ones,” Crown Prince said.

“At the commencement of the inaugural edition of this forum, I announce to you today, the first set of initiatives and programs that will contribute to achieving the targets of the Saudi Green Initiative, in reducing emissions, and protecting the environment,” he added.

“These initiatives aim at modifying the Kingdom’s energy mix, rationing and increasing the efficiency of energy production and use, and investing in new energy sources, including hydrogen,” he added.

The Crown Prince also announced the Kingdom's accession to the Global Methane Pledge, which aims to reduce methane emissions globally by 30 percent.

Prince Muhammad said a number of subsidiaries of the Saudi Public Investment Fund (PIF) would announce several initiatives that contribute to this endeavor.As for protecting the environment, the Crown Prince said, ”We have previously announced the target of planting 10 billion trees throughout the Kingdom, which represents one percent of the global target for planting trees.

“We also announced raising the percentage of protected areas to 30 percent of the Kingdom’s total areas; in our belief that confronting climate change is not only limited to reducing emissions, but also protecting and enhancing the environment.”

The Crown Prince announced the start of the implementation of the first phase of afforestation initiatives by planting more than 450 million trees, in addition to rehabilitating 8 million hectares of degraded lands, and allocating newly protected areas, thus bringing the total protected areas in the Kingdom to more than 20 percent of its total area.

He revealed also the intention to transform Riyadh into one of the most sustainable cities in the world through a set of solutions.

“Additional projects and initiatives to achieve the targets we have set forth, will be announced annually and in accordance with the technical studies being conducted in this regard.”

Recognizing the importance of promoting joint international action, the Crown Prince announced the Kingdom’s intention to join the Global Oceans Alliance, the Alliance to Eliminate Plastic Waste in Oceans and Beaches, the Sports for Climate Action Agreement, in addition to establishing a global center for Sustainable Tourism, and establishing a Non-Profit foundation to explore the seas and oceans.

“I announce today that Saudi Arabia aims to reach Net Zero in the year 2060, through the Carbon Circular Economy approach, in line with its development plans, and enabling its economic diversification, and in accordance with the "Dynamic Baseline", while preserving and reinforcing the Kingdom’s leading role in the security and stability of global energy markets, with the availability and maturity of required technologies to manage and reduce emissions.”

This first set of initiatives represents investments worth more than SR700 billion, which contributes to creating quality job opportunities, providing significant investment opportunities for the private sector, and developing the green economy, in accordance with the Kingdom's Vision 2030.

The Crown Prince concluded by saying: “I look forward to the Middle East Green Initiative Summit, which we will host Monday, with the aim of synergizing and coordinating efforts among the countries of the region to develop the plans necessary to reach the Middle East Green Initiative targets of; planting 50 billion trees in the region, and reducing carbon emissions in the region by more than 10 percent of total global contributions.”
Add Comment