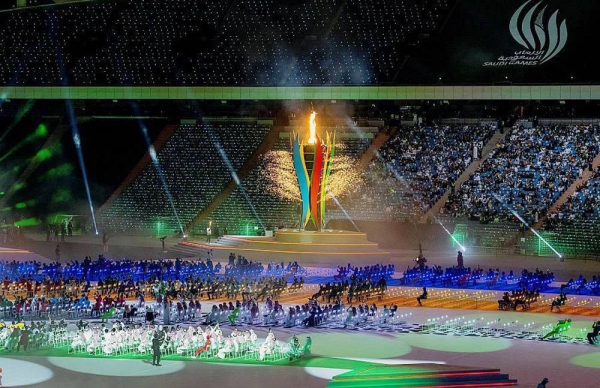 Under the patronage of Custodian of the Two Holy Mosques King Salman and on behalf of Crown Prince and Prime Minister Mohammed Bin Salman, Governor of Riyadh Region Prince Faisal Bin Bandar attended the opening ceremony of the first edition of the Saudi Games 2022.
The Saudi Games 2022 is the biggest national sporting event, with the participation of more than 6,000 athletes and 2,000 technical and administrative supervisors at King Fahd International Stadium in the capital, Riyadh.

The opening ceremony of Saudi Games 2022 began with the royal anthem, followed by the march of the participating athletes and the flags of the Olympic and Paralympic Committee.

In his speech, Prince Abdulaziz extended, in his own name and on behalf of all Saudi athletes, thanks to Custodian of the Two Holy Mosques for his generous patronage of this important sporting event, and to Crown Prince for his unlimited support for the sports sector.

He also thanked the Crown Prince for his follow-up and empowerment of the sports sector to hold this historic event for the sport of the homeland, at the same time, he thanked Prince Faisal for honoring and attending the great opening ceremony.

He said: "We are proud of this important day of this generous care by our prudent leadership with the launch of the first Saudi Games, this idea planned by Crown Prince to give more than 6,000 male and female athletes the opportunity to compete and highlight their talents in order to achieve championships and ascending the podiums.

“We are proud of the presence of Saudi champions representing more than 200 Saudi clubs, which present their heroes in the march of passion, dreaming and heading towards the shining of gold, and winning the title in 45 sports with 5 other sports dedicated to Paralympic champions."

He added, "All the best to our Saudi heroes in this historic edition, and I hope that this games will be a nucleus and a key to presenting distinguished and creative champions, able to develop themselves to raise the name of Saudi Arabia in the future in continental, regional and international forums."

Then, the fireworks lit up the sky over King Fahd International Stadium, then the Olympian athletes passed the torch of the Saudi Games to its official platform, marking the launch of this huge sporting event.

The Governor of Riyadh Region praised the name of the Saudi Games and the great goals it seeks under the patronage of Custodian of the Two Holy Mosques and the support and interest of Crown Prince, while wishing everyone all success.

It is worth mentioning that the Saudi Games competitions are held in 22 sports facilities in Riyadh, with the participation of more than 6,000 male and female athletes, competing in 45 sports, including 5 sports dedicated to the Paralympic Games, under which 180 sports competitions fall.

The participating athletes will be motivated to provide their highest performance by allocating the highest prizes in the history of the region, with a total of more than SR200 million up for grabs, as the gold medal winner in any game will get one million riyals, the silver SR300,000, and the bronze SR100,000.

The Saudi Games 2022 aims, in its first edition, to increase the popularity of various games in the Kingdom, and to achieve an ideal sports environment for competition among athletes in various sports.

It also seeks to raise the level of the Kingdom of Saudi Arabia’s capabilities to organize major sporting events in order to achieve the targets of the Kingdom’s Vision 2030, and in a way that goes in line with the unlimited support that the sports sector enjoys from the Kingdom's prudent leadership.
Add Comment