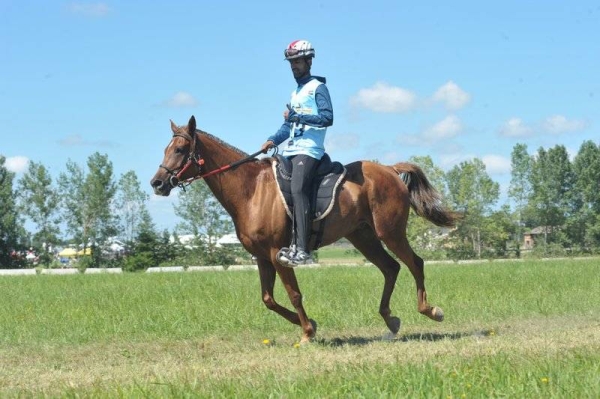 Hammoud Al-Badi, a Saudi jockey, has qualified for the FEI Endurance World Championship for Young Horses, the Saudi Press Agency reported on Sunday.
The world championship, which is scheduled to be held in mid-September in Italy, covers a distance of 120 km.

Al-Badi's qualification comes after he cleared the 120-km two-star international race on Saturday, which was held in France, with the participation of 33 jockeys from many countries around the world. The race involved four stages, with the first covering a distance of 39 km, the second 30 km, the third 26 km, and the fourth stage spread over 30 km.

It is noteworthy that Al-Badi received the award for the champion of the endurance season 2020-2021, presented by the Saudi Equestrian Federation, after achieving first place in the general ranking of the jockeys.

Speaking on the occasion, Al-Badi said that the race saw difficult stages but he was able to overcome them and qualify for the World Championship.

Al-Badi thanked Prince Abdullah bin Fahd, the president of the Saudi Arabian Equestrian Federation, for his continuous support over the years.
Add Comment