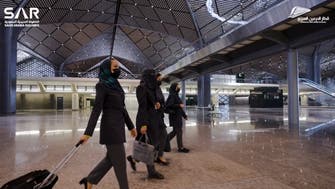 Saudi Railway (SAR) celebrated the training achievements of its first 32 female drivers in a video shared to its Twitter account, after the women completed their first stage of training in 2022.
The video, released on New Year’s Day, featured some of the women who took part in the training who said that they were so proud to be a part of the pioneering initiative, of which they were the first batch, and were looking forward to the road ahead.

After a year of training, the 32 women are now on track to drive bullet trains on the 453-kilometer Haramain high-speed line between the Saudi cities of Mecca and Medina, making them the first women to drive SAR trains.

Saudi women have made significant contributions to the Kingdom’s economy in recent years, and the ability to drive has played a major role in this trend. Prior to 2018, Saudi women were not permitted to drive, which limited their mobility and career opportunities. However, the lifting of the ban on women driving in June 2018 marked a major shift in the role of women in Saudi society.

Since then, women in Saudi Arabia have made significant strides in the workforce. This trend is expected to continue as the government works towards its goals under Saudi Vision 2030, a plan set forth in 2016 to diversify the economy and reduce its reliance on oil.

Women in Saudi Arabia are now able to take on a wider range of jobs, including positions in the transportation and logistics sectors, which were previously off-limits to them.
The ability to drive has also given them more independence and the freedom to pursue education and career opportunities. In addition, the presence of women in the workforce has helped to boost the economy and increase productivity.
Add Comment