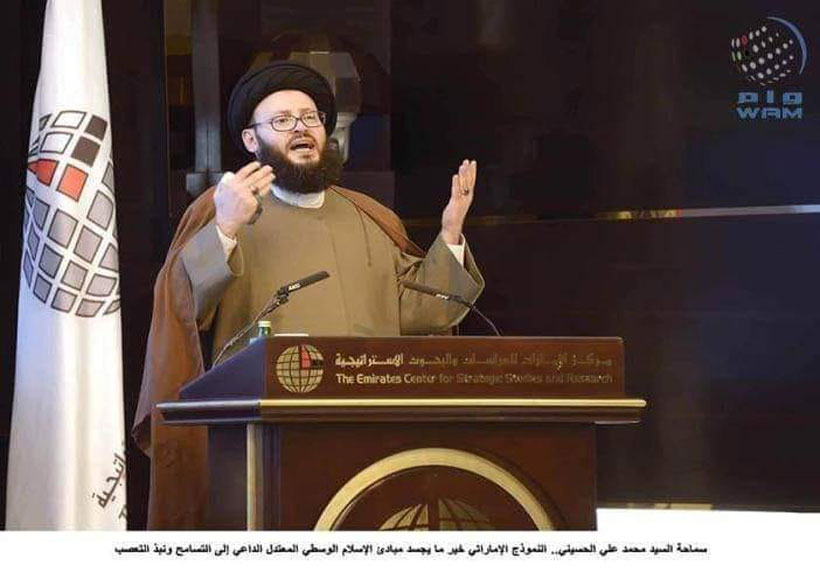 Mohammed Ali al-Husseini, one of Saudi Arabia’s newest naturalized citizens, ticks all the boxes needed to earn brownie points in the kingdom’s quest for religious soft power garnered by positioning itself as the beacon of ‘moderate,’ albeit autocratic, Islam.
A resident of Saudi Arabia since he had a fallout with Hezbollah, the Iranian-backed Lebanese Shiite militia, Mr. Al-Husseini represents what the kingdom needs to support its claim that its moderate form of Islam is religiously tolerant, inclusive, non-sectarian, pluralistic, and anti-discriminatory.

More than just being a Shiite, Mr. Al-Husseini is the scion of a select number of Lebanese Shiite families believed to be descendants of the Prophet Mohammed.

Put to the test, it is a billing with as many caveats as affirmatives – a problem encountered by other Gulf states that project themselves as beacons of autocratic interpretations of a moderate strand of the faith.

Even so, Saudi Arabia, despite paying lip service to religious tolerance and pluralism, has, unlike its foremost religious soft power competitors – the United Arab Emirates, Qatar, Turkey, Iran, and Indonesia, yet to legalise non-Muslim worship and the building of non-Muslim houses of worship in the kingdom.

Similarly, the first batch of 27 newly naturalized citizens appeared not to include non-Muslims. If it did, they were not identified as such in contrast to Mr. Al-Hussein’s whose Shiite faith was clearly stated.

The 27 were naturalized under a recent decree intended to ensure that Saudi Arabia can compete with countries like the United Arab Emirates, Qatar, and Singapore in attracting foreign talent. About a quarter of the new citizens, including Mr. Al-Husseini and Mustafa Ceric, a former Bosnian grand mufti, were religious figures or historians of Saudi Arabia.

In doing so, Saudi Crown Prince Mohammed bin Salman linked his economic and social reforms that enhanced women’s rights and catered to youth aspirations to his quest for religious soft power and leadership of the Muslim world. The reforms involved tangible social and economic change. Still, they refrained from adapting the ultra-conservative, supremacist theology that underlined the founding of the kingdom and its existence until the rise of King Salman and his son, the crown prince, in 2015.

Prince Mohammed’s notion of ‘moderate’ Islam is socially liberal but politically autocratic. It calls for absolute obedience to the ruler in a deal that replaces the kingdom’s long-standing social contract in which the citizenry exchanged surrender of political rights for a cradle-to-grave welfare state. The new arrangement expands social rights and economic opportunity at the price of a curtailed welfare state as well as the loss of political freedoms, including freedoms of expression, media, and association.

A series of recent op-eds in Saudi media written by pundits rather than clerics seemingly with the endorsement, if not encouragement of the crown prince or his aides, called for top-down Martin Luther-like religious reforms that would introduce rational and scientific thinking, promote tolerance, and eradicate extremism.

Mamdouh Al-Muhaini, general manager of the state-controlled Al-Arabiya and Al-Hadath television networks, spelled out the top-down process of religious reform that would be led by the crown prince even though the writer stopped short of identifying him by name.

“There are dozens, or perhaps thousands, of Luthers of Islam… As such, the question of ‘where is the Luther of Islam’ is wrong. It should instead be: Where is Islam’s Frederick the Great? The King of Prussia, who earned the title of Enlightened Despot, embraced major philosophers in Europe like Kant and Voltaire and gave them the freedom to think and carry out scientific research, which helped their ideas spread and prevail over fundamentalism after bitter clashes. We could also ask where is Islam’s Catherine the Great…? Without the support and protection of these leaders, we would have likely never heard of these intellectuals, nor of Luther before them,” Mr. Al-Muhaini said.

Messrs. Al-Husseini and Ceric represent what Saudi Arabia would like the Muslim and non-Muslim world to take home from their naturalization.

A religious scholar, Mr. Ceric raised funds in Saudi Arabia, Iran, and Malaysia during the Bosnian war in the 1990s and defended issues close to Saudi Arabia’s heart even if his own views are more liberal.

Mr. Ceric argued, for example, that opposition to Wahhabism, the kingdom’s austere interpretation of Islam that has been modified since King Salman came to power, amounted to Islamophobia even if the cleric favoured Bosnia’s more liberal Islamic tradition. The cleric also opposed stripping foreign fighters, including Saudis, of Bosnian citizenship, granted them for their support during the war.

To Saudi Arabia’s advantage, Mr. Ceric continues to be a voice of Muslim moderation as well as proof that Islam is as much part of the West as it is part of the East and the hard to defend suggestion that being a liberal does not by definition entail opposition to ultra-conservatism.

Referring to the fact that he is a Shiite, Mr. Al-Husseini said in response to his naturalisation by a country that was created based on an ultra-conservative strand of Islam that sees Shiites as heretics: “The glowing truth that cannot be contested is that the Kingdom of Saudi Arabia is open to everyone…and does not look at dimensions of…a sectarian type.”

Beyond being a Shiite Muslim cleric, Mr. Al-Husseini is to have been a Hezbollah insider. A one-time proponent of resistance against Israel, Mr. Al-Husseini reportedly broke with Hezbollah as a result of differences over finances.

He associated himself on the back of his newly found opposition to Hezbollah with the Saudi-backed March 14 movement headed by Saad Hariri, a prominent Lebanese Sunni Muslim politician.

As head of the relatively obscure Arabic Islamic Council that favoured inter-faith dialogue, particularly with Jews, Mr. Al-Husseini ticked off another box on the Saudi checklist, particularly given the kingdom’s refusal to establish diplomatic relations with Israel without a clear and accepted pathway to a resolution of the Israeli-Palestinian conflict.

While Mr. Al-Husseini’s history fits the Saudi bill, his impact appears to be limited. He made some incidental headlines in 2015 after he used social media to urge Muslims, Jewish, and Christian clerics to downplay religious traditions that call for violence.

Mr. Al-Husseini spoke as the tension between Israel and Lebanon mounted at the time after Hezbollah killed two Israeli soldiers in a cross-border attack.

Earlier, Mr. Al-Husseini seemingly became the first Arab Shiite religious figure to address Israelis directly and to do so in broken Hebrew.

“We believe that not all Jews are bad [just as] not all Muslims are terrorists. Let us cousins put our conflicts aside and stay away from evil and hatred. Let us unite in peace and love,” Mr. Al-Husseini told an unknown number of Israeli listeners.

Mr. Al-Husseini’s presence on social media pales compared to that of the Muslim World League and its head, Mohammed Al Issa. The League, the one-time vehicle for Saudi funding of Muslim ultra-conservatism worldwide, and its leader, are today the main propagators of Prince Mohammed ’s concept of moderate Islam.

Mr. Al-Husseini’s 47,00 followers on Twitter and 10,200 on Facebook pale against his Saudi counterparts who propagate a message similar to his.