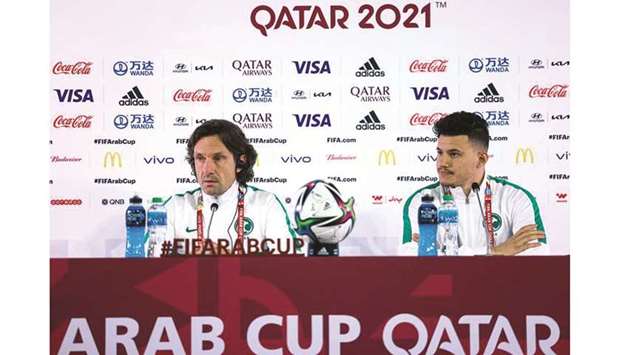 Apart from two 24-year-old goalkeepers, none of the players in squad who have to come Qatar are born before 1999, with the main team players – including Salman al-Faraj and Salem al-Dawsari – given rest after a busy schedule this year. The Green Falcons will also miss the services of their regular head coach Herve Renard, with his assistant Laurent Bonadei taking over from the fellow Frenchman for the Arab Cup.

With Renard watching from sidelines, it’s an opportunity for the youngsters in the squad to impress the coach ahead of next year’s World Cup in Qatar – for which Saudi are in a strong position to qualify. Ahead of their opening match against Jordan at Education City Stadium today, stand-in coach Bonadei was excited at the prospect of playing a team with full of youngsters. Bonadei has plenty of experience and has been in charge of Paris Saint-Germain’s Under-17 and Under-19 teams in the past.

“There is no doubt it will be a difficult match against Jordan. But we have exciting young players in our squad, who have developed in the strong Saudi league and are capable of putting in good performances,” he said yesterday. “I am happy and honoured to take over this group of players. Even if we will be one of the youngest team we will do our best and fight with ambition and determination,” the Frenchman added.

Bonadei a felt a victory today would go a long way in calming the nerves in the camp and help them progress to the quarter-finals from Group C, which also consists of Morocco and Palestine.

“Performance in the opening match is key for our knockout hopes. If we can win tomorrow, then it will set us up nice for rest of the tournament. We know the Jordan team well as we have watched their previous matches. We have gone through good preparation and we know what we have to do tomorrow,” the Saudi coach said. “We will give everything we have to reach our goal and we are looking forward to the challenge and I am looking forward to the opportunity,” he added. The team that touched down in Qatar bears some resemblance to the Under-23 side that played at the Tokyo Olympics in the summer and then qualified for the 2022 AFC U-23 Asian Cup in October and November.

The two main strikers, Abdullah al-Hamdan and Firas al-Buraikan, will be hoping to make a splash in Qatar. Both have appeared for the senior team without being able to make a starting spot their own.

Al-Hamdan was looking forward at the opportunity to impress in the tournament. “We will play to beat Jordan and would want to qualify to the knockout stage at the earliest. We may have a young squad but they are all talented and it’s an opportunity for us to learn at the biggest stage,” he said. After taking on Jordan today, Saudi go up against Palestine three days later and Morocco, who are also bringing in A team with many of their star players playing at top European clubs.

Meanwhile, Jordan coach Adnan Hamad said he is wary of a young side Saudi. “They have some good players and deserve respect, despite the absences of main players. The Jordanian team had previously participated in the Arab tournament here in Doha several years ago in the reserve team and reached the final despite the absence of many names from the young players in that. So we can’t take Saudi team lightly. But I have great confidence in my team through and we are ready for the tournament. It would be a good start if we can get three points against Saudi,” he said.