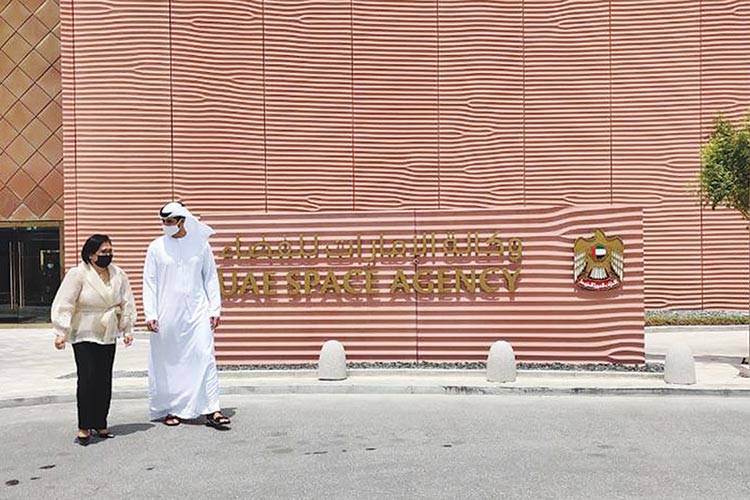 The Republic of the Philippines and the United Arab Emirates diplomatic relations are now 47 years old and in efforts to continually fortify this, not only for the benefit of their respective citizens but for the entire humanity as well, a Space Cooperation has been initiated by the Philippine Embassy in Abu Dhabi.
The first meeting took place exactly on the 47th anniversary of the diplomatic relations last August 19 (Thursday). Officials and representatives of the two-year-old Philippine Space Agency (PhilSA) and the seven-year-old United Arab Emirates Space Agency (UAESA), led respectively by PhilSA director general Dr. Joel Marciano Jr. and UAESA executive director Ibrahim Al Qasim, met virtually at the UAE Space Agency headquarters in Masdar City, Abu Dhabi.

According to the press release given to Gulf Today on late Thursday evening, Marciano and Al Qasim “lauded the Embassy’s efforts to bring together the two space agencies and discussed practical ways the Philippines and the UAE can move forward with Space Cooperation.”

Specifically discussed at the initial meeting, with Philippine Ambassador to the UAE Hjayceelyn M. Quintana in attendance, were cooperation on space technology applications primarily concentrating on food security, hazard management and climate studies. Both sides considered exchange of experiences in the respective space programmes between Filipino and Emirati scientists. The parties expressed commitment to the signing of a Memorandum of Understanding during the October 2021 “72nd International Congress” to be hosted by the UAE and held in Dubai.

In her speech on Thursday, Quintana, the eighth Philippine Ambassador to the UAE, after the diplomatic relations were established on August 19, 1974 said: “Let us make this 47th year anniversary a milestone in our relations. By forging the path of space cooperation, the Philippines and the UAE are charting a new frontier in our bilateral relations, which like space, will be of limitless possibilities.”

She early on stated: “Even in the midst of the pandemic, the last two years have been groundbreaking for both the Philippines and the United Arab Emirates (UAE) as far as space science and technology is concerned.

“In 2019, the Philippine Space Agency was born on August 8 to be exact. The UAE on the other hand, made history when its Mars Mission ‘Al Amal’ or ‘Hope Probe’ was launched on July 19, 2020 and reached Mars on February 9, 2021 making the UAE the first Arab country and the fifth country to reach Mars. Truly a spectacular feat for the UAE Space Agency that is only seven years old.

“The Philippines and the UAE may be new in the field of space exploration but there is no doubting and underestimating their enthusiasm and eagerness to jump-starting science and succeed in exploring the great beyond. Their efforts, individually, have shown so much promise and future.”

Quintana mentioned the ejection into space of the two PhilSA micro and nano satellites coded as DIWATA (Filipino for fairy)-1 and DIWATA-2 as well as the cube satellite Maya (a small passerine Philippine bird)-2: “The DIWATA-2 was launched along with the UAE’s KhalifaSAT from the Tanegashima Space Center in Japan on October 29, 2018, even before the formal creation of the PhilSA. A cube satellite, Maya-2 was also released to space this year, on March 14, which is the Philippines’ fourth successful attempt to send a satellite to space.

Japanese experts cited the Philippines as one of the best examples of a success story saying that none is more serious about developing in-country human resources than the Philippines. As they say, before you can make a spacecraft, you have to train engineers who know how to make them. With these microsatellites for space research, the Philippines can do applications in remote sensing and communications. They can also be used for climate monitoring to disaster response and other applications that can help in economic recovery and national growth.”

Quintana praised the dedication of the UAE in engaging in international collaboration and aptly referenced to the statement of UAE Minister of State for Advanced Technology Sarah Al Amiri at the June 8, 2021 signing of the Artemis Accords, relative to the USA-led programme and the “political commitment of governments” to send man back to the moon by 2024.
Add Comment