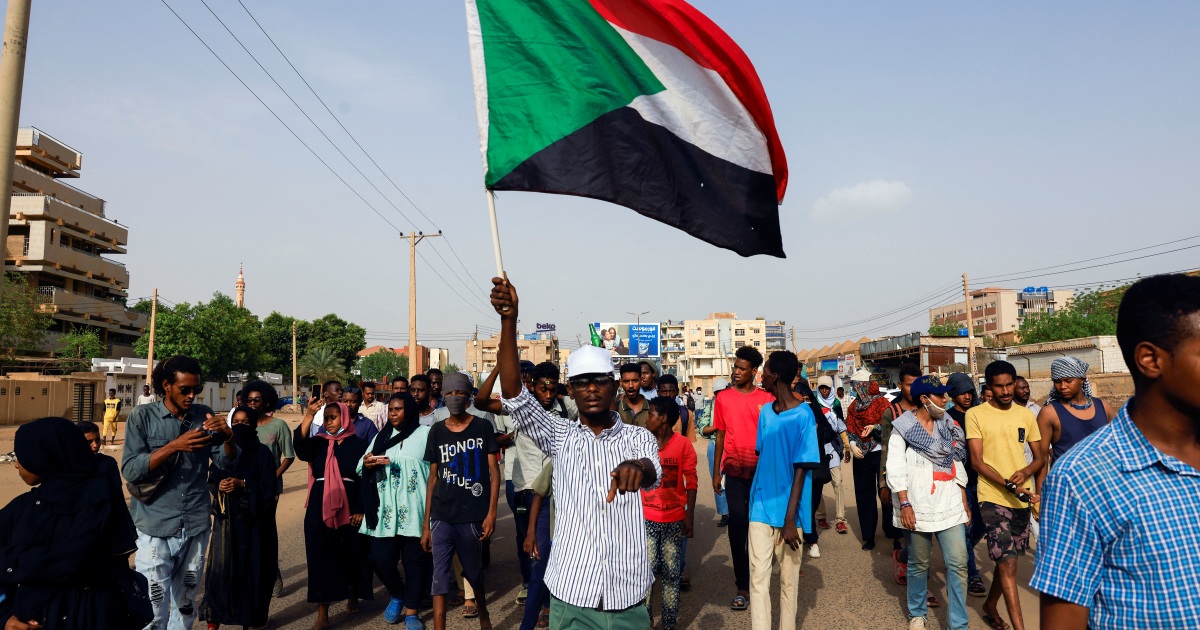 Civilian blocs and resistance committees are rushing to build a new front to assume executive functions.

Appearing on television late on Monday, Sudan’s coup leader Abdel Fattah al-Burhan announced that the military would step aside and allow civilian forces to assume power, appearing to concede to the demands of the country’s mass pro-democracy movement.

But violence against demonstrators, along with reports that the military will continue to control Sudan’s central bank and foreign policy, have supported widely held suspicions that the security forces have no intention of actually relinquishing power.

“How many times has [al-Burhan] spoken about participating in negotiations, and not killing people, and how government forces protect civilians?,” asked Dania Atabani, a member of one of the resistance committees – neighbourhood groups spearheading demonstrations across the country. “It would be very stupid if we trusted him again now.”

As the head of the Sudanese Armed Forces, al-Burhan said that the military would withdraw from internationally backed political talks and allow civilians to form a transitional government.

Al-Burhan added that the military, along with a powerful paramilitary group known as the Rapid Support Forces (RSF), would form a new “Security and Defence Council”, tasked with protecting the country.

Protesters, politicians, and experts told Al Jazeera that they fear the new council would supersede the authority of a civilian executive.

That would allow security forces to preserve their lucrative economic assets, safeguard the interest of their foreign patrons, and evade accountability for killing at least 114 civilians in anti-coup protests, which began after the military upended the country’s fragile transition to democracy on October 25, 2021.

“What gives al-Burhan the authority to set up a security and defence council?” asked Kholood Khair, a Sudanese political analyst and the head of Insight Strategy Partners, a think-tank based in the capital of Khartoum. “He has basically completed the coup by doing away with all of the institutions from the democratic transition.”

With the military sidestepping responsibility for running day-to-day affairs, civilian blocs and resistance committees are now rushing to build a new front to assume executive functions and advance their quest for full civilian rule.

In a news conference on July 5, the Forces of Freedom and Change (FFC) – a coalition of political parties that participated in government before the military overthrow – said that all revolutionary forces must first agree on a constitutional declaration that outlines the mandate and parameters of the transitional period.

“There is now a real chance to recapture the spirit of the broad-based civilian coalition that unseated Omar al-Bashir,” Khair told Al Jazeera, referring to the protest movement that brought down Sudan’s former president in April 2019. “But I think one thing that the FFC really needs to do is align itself with the resistance committee’s charters.”

Both charters call for full civilian rule, sustainable economic development, and equitable wealth sharing. Despite some differences, resistance committees have agreed to merge the two charters to establish a unified political vision.

Ammar Hammoda, a spokesperson for the FFC, told Al Jazeera that politicians are hoping to make the charters a core part of a plan that represents all civilian groups. However, he stressed that not everyone will see eye to eye on every detail.

“We still need to reach an agreement about [the charters] and as we get into the details we will find obstacles here and there,” he said. “But the FFC is not the only main player any more. We must unite with the resistance committees and other civilian groups.”

Keeping up the Pressure

Al-Burhan’s announcement indicated that the leaders of Sudan’s military coup are now worried about a mounting civil disobedience campaign that ramped up after security forces killed nine people during a mass protest on June 30. In response, resistance committees and the FFC called for a general strike and sit-ins across the country.

“The immediate calls after the violence suggested that protests were going to spread like fire on dry grass,” said Suleiman Baldo, the founding director of the Sudan Transparency and Policy Tracker. “The [strike,] in particular, would have been the moment of total defeat for the military and its coup.”

Baldo added that civilian forces have a real chance to push the military to relinquish power if they come up with a political map quickly.

“Civilians need to very clearly spell out what the military’s powers are … They can’t leave it to al-Burhan to define the defence council’s mandate,” he said.

The FFC has already stressed the need for security sector reform, stating that Sudan needs a single national army. The coalition also urged the Intergovernmental Authority for Development (IGAD) – an eight-member East African regional bloc that has been accused of yielding to the military – to condemn the coup during a summit this week that al-Burhan attended in Kenya.

IGAD and the broader global community have kept quiet about al-Burhan’s announcement of a new council. Just days before, diplomats from the European Union and the Troika – the United States, United Kingdom and Norway – were calling for civilian groups and the military to engage in a tripartite political dialogue, which IGAD, the UN and the African Union were mediating.

But the pro-democracy movement rejected those calls out of fear that it would produce another power-sharing deal that could legitimise the military’s stranglehold over politics and the economy.

Shaienz Gamal, a resistance committee member who spoke to Al Jazeera from one of the sit-ins in Khartoum, said that the only way forward was to continue calling for strikes and protests. She promised that a united civilian front would eventually defeat Sudan’s military leaders – as long as the FFC adhered to popular demands.

“The position of the street is clear,” Gamal said. We keep telling everybody that there will be no negotiations, no partnership, and no legitimacy for the military.”