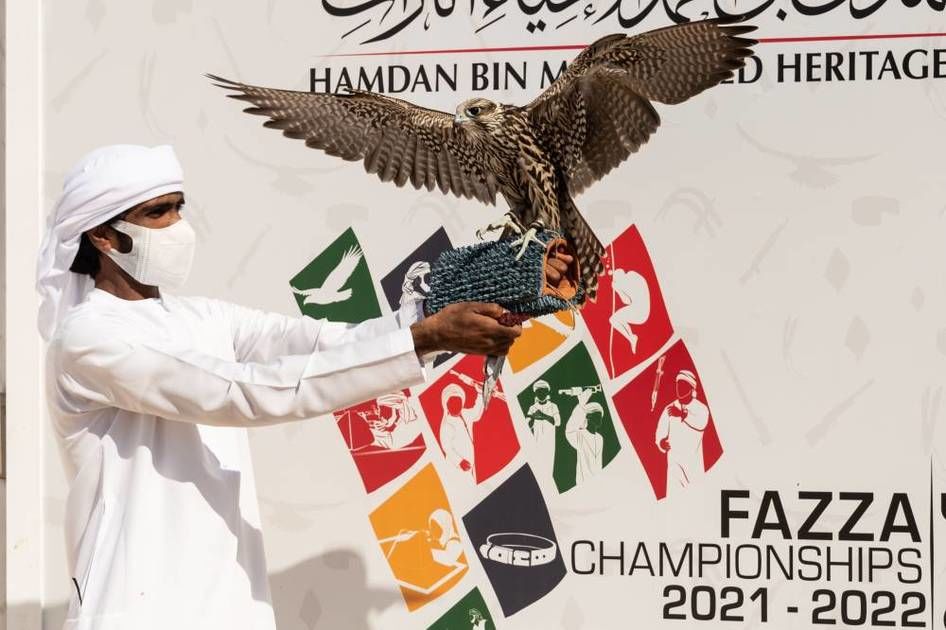 The Fazza Championship for Falconry crossed the 2000 Bird Barrier

The number of falcons has crossed the 2000 mark in anticipation of the imminent end of the main fossa championship for the Falconry “Talwa” organized by the Hamdan Bin Mohammed Heritage Center in the Al Ruwaiya area of ​​Dubai, and the screen falls with runs on it. Zir Shaheen hosts “Shakes” Friday “January 14”, and next Saturday the Juniors.
The final runs for this division were held on both Wednesday and Thursday, increasing the enthusiasm and strong competition in the Open Open races, and these runs were characterized by key reserves of Falconers from the Gulf countries, reflecting comprehensive goals and important ones. Impact on traditional sports in the country and region through the Fossa Championship for the main “Volta” Falconry.

Also in the gear runs followed in the public open, the Dubai team took first place in the index chick race, followed by the “Prairie” bird, in 17.939 seconds, with the bird “Muhammad Khalifa Al Mansouri” “D4”. The Dubai team finished third with a duff in 18,047 seconds, finishing in 18.046 seconds.

Saudi Amin bin Abdullah Al-Mallah, who flew in 17.459 seconds in the race of Ramaz Jarnas, took the first place with a bird called Burk and a bird named Harb took the second place with a time of 17,499 seconds. Third, Saif Jamal al-Hurais bird with “35” with 17,512 seconds.

Rashid al-Qasuni, director of the competition department at the Hamdan Bin Mohammed Heritage Center, stressed that the competition has always been a forum for brothers from all over the world, especially from the Gulf countries, to live up to the atmosphere of this ancient traditional game. The structure that transcends the structure of competition, but becomes a social gathering, will contribute to the spread of folk tales between generations and the sharing of experiences among hawks.

The participating Falconers praised the atmosphere of the competition and expressed his appreciation for the efforts of the Bahraini Abdul Aziz Al Balushi Organizing Committee and confirmed that he participated with the best Falcons to compete in this important event held at the Gulf Arena. Year after year it became a goal for everyone.

Hamad Bonavas, who leads the “Al Farzan” team, noted that public races are particularly open and always have a special and inspiring nature, especially as the championship reaches its final stages and everyone strives to achieve the best results.
Add Comment