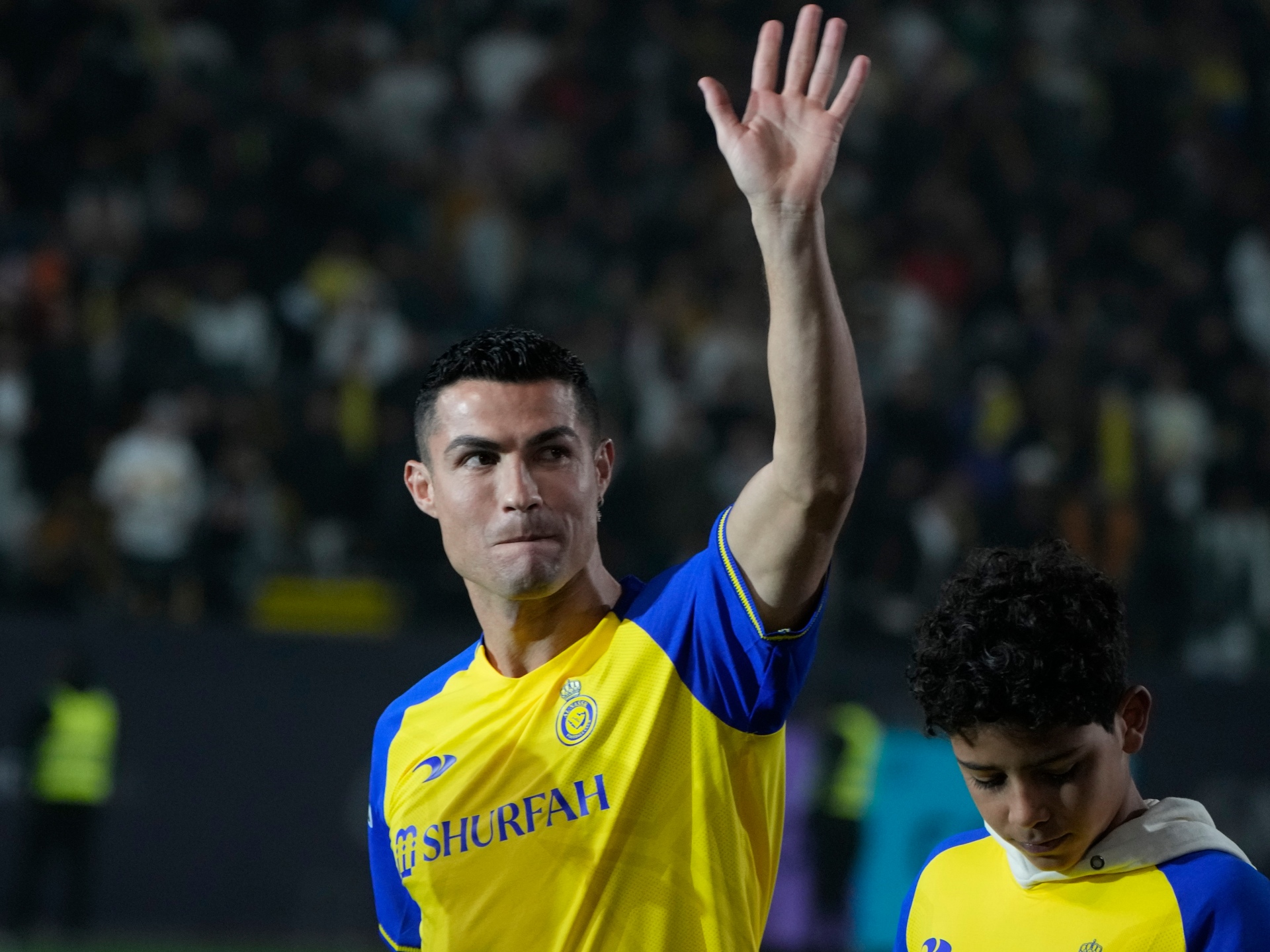 Cristiano Ronaldo has been officially presented to fans at his new Saudi Arabian club, where he received a thunderous welcome.

Cristiano Ronaldo described himself as a “unique player” and insisted his career was not over as he received a thunderous welcome at his new club, Al Nassr in Saudi Arabia.

The Portuguese superstar, 37, said on Tuesday that he had done all he could in Europe and was hungry for a new challenge as he was greeted by fireworks and deafening roars at Al Nassr’s Mrsool Park stadium in the capital Riyadh.

The five-time Ballon d’Or winner, with five Champions League titles to his name, signed for an estimated 200 million euros ($211m) until June 2025 not long after his acrimonious split with Manchester United.

“It’s not the end of my career to come to Saudi Arabia. This is why I change and, to be honest, I’m really not worried about what people say,” Ronaldo said.

“In Europe my work is done… I had many offers in Europe, many in Brazil, Australia, the US, even in Portugal,” he added. “Many clubs tried to sign me but I gave my word to this club.”

The packed, 25,000-capacity stadium erupted when Ronaldo, dressed in Al Nassr’s yellow and blue kit, walked on the pitch, saluting the crowd as fireworks and floodlights flashed around him.

His girlfriend Georgina Rodriguez, wearing the traditional black abaya or all-covering robe worn by most Saudi women, followed at a distance along with Ronaldo’s children. 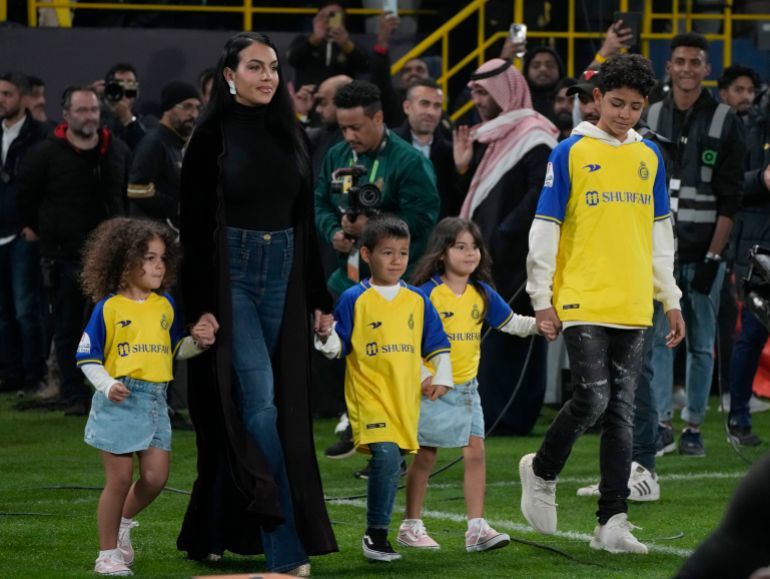 Cristiano Ronaldo’s family attend the official unveiling as a new member of Al Nassr soccer club in Riyadh, Saudi Arabia
“I’m a unique player. It’s good to come here, I broke all the records there [in Europe] and I want to break a few records here,” Ronaldo said earlier.

Al Nassr coach Rudi Garcia said the signing of Ronaldo was a huge step for the Saudi Arabian league.

“In my life, I’ve seen that great players like Cristiano are the simplest to manage, because there’s nothing I can teach him,” Garcia told reporters.”Like he said, we are here to win, nothing else. I want him to enjoy playing with Al Nassr and winning with Al Nassr, just that.”

Ronaldo joins the nine-time Saudi champions just weeks after his departure from United following a TV interview in which he criticised the club and coach Erik ten Hag.

‘Greatest player in the world’

“The amount of investment in Saudi football … in the kingdom has been enormous and I think it’s only going to go up from here,” Al Twaijri told Al Jazeera.

“They’re going to try and get big names – who knows, maybe we might get Messi … [or] any of those players who you’d normally see go towards previously China, previously Qatar, or … the United States of America,” he said, referring to Argentinian footballer Lionel Messi.

Al Twaijri said he expects the Saudi league to become one of the “top 10 in the world” by the year 2030, which is the year Saudi Arabia expects to have implemented a plan that seeks to diversify the kingdom’s economy and reduce its dependence on oil.

Ronaldo arrives just weeks after the World Cup in neighbouring Qatar, and as Saudi Arabia considers a joint Asia-Africa-Europe bid to host football’s biggest tournament with Egypt and Greece.

Well before his arrival, supporters carrying yellow “Ronaldo 7” flags and blue-and-yellow Al Nassr scarves turned up at the stadium, some of them looking for tickets. 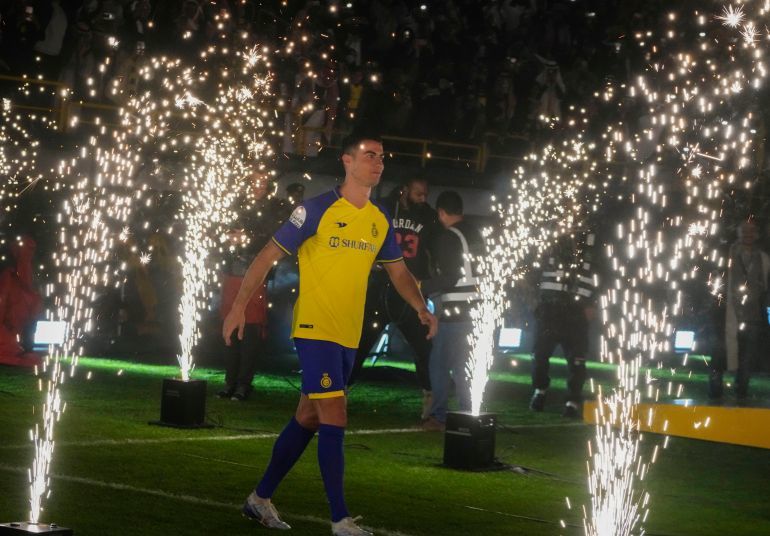 Excitement is at a fever pitch over the arrival of Ronaldo, the highest-profile player to come to Saudi Arabia, the Gulf or any country in the Asian confederation.

Adam Seddik, an Al Ittihad fan from Jeddah, said he drove 900km (560 miles) to Riyadh to witness the spectacle.

“His presence will elevate the Saudi league value and its viewership,” said Seddik. “He is the greatest player in the world.”

Excitement is at a fever pitch over the arrival of Ronaldo, the highest-profile player to come to Saudi Arabia, the Gulf or any country in the Asian confederation.

Fans queued down the street to buy Ronaldo’s Al Nassr shirt with his trademark number seven, and Al Nassr’s Instagram page gained millions of new followers after his signing was made public.

Ronaldo’s signing comes against the backdrop of a Saudi push into sports including golf, boxing, tennis and F1 as well as football, following the Saudi takeover of English Premier League club Newcastle United last year.