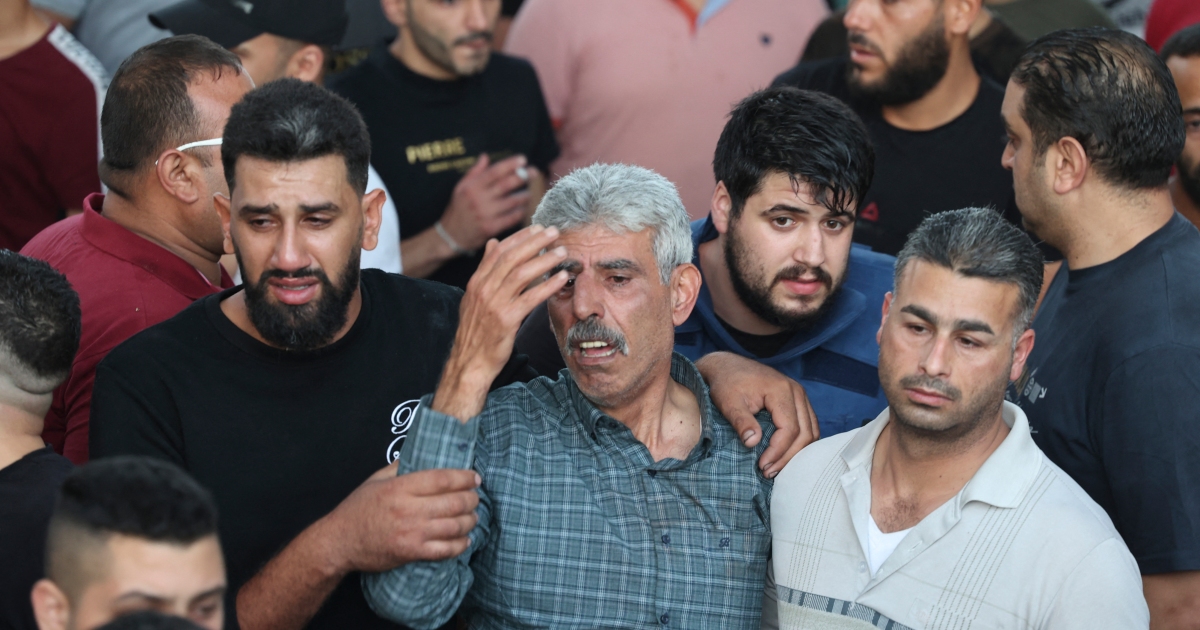 Muhamad Azizi and Abdul Rahman Sobh were killed by the Israeli forces during an overnight raid on Nablus.

Two Palestinians were killed overnight during an Israeli army raid in the occupied West Bank city of Nablus, the Palestinian health ministry has said.

The ministry on Sunday said Muhamad Azizi, 25, was killed by a bullet to the chest, while Abdul Rahman Jamal Suleiman Sobh, 28, was shot in the head.

Palestinian news agency Wafa said Israeli forces stormed al-Yasmina neighbourhood in the Old City of Nablus after midnight and cordoned off a house before embarking on bombing the house with explosives and gunfire, killing two Palestinians.

According to the Palestinian Red Crescent, at least 12 others were wounded, including one in serious condition.

A neighbour, Naser Estitya, 60, said he heard gunshots from inside the house before the Israeli forces fired heavily at the house.

“They were calling the name of one person, asking him to surrender,” he said.

Photos from the scene showed part of the wall on the top floor had been destroyed.

“Another crime committed by the occupation forces in the old city of #Nablus, where martyrs have fallen and many wounded,” Hussein al-Sheikh, a senior Palestinian official, said on Twitter.

“We strongly condemn this crime, and we hold the occupation responsibility for its repercussions.”

The Israeli army said it was carrying out an operation in Nablus, without immediately commenting on the Palestinian report of casualties.

In a statement, it said there were exchanges of fire between armed suspects and troops that ended with “neutralising the terrorists inside the house and on its roof”.

Large crowds gathered for the funeral processions of both men in Nablus.

Reporting from the Nablus, Al Jazeera’s John Holman said Israeli forces entered the old city in Nablus and shelled a house where gunmen were sheltering and shot dead Palestinian men, both in their twenties.

“It was announced that both men were members of the military wing of Fatah, the Al-Aqsa Martyrs Brigade. Abdul Rahman was engaged and had been in Israeli prisons a couple of years back. His uncle was also killed by Israeli forces in 2019.

“Israeli raids into the occupied West Bank have been happening for years as a near nightly occurrence, but they have intensified after March and April,” he said.

Holman said that a general strike across Nablus had been called to mourn the killing of both men and to protest the continuous Israeli raids.

“There is no sense of security that these raids will not continue. There is also no sense of hope for their future,” said Holman after speaking to other young Palestinians in Nablus.

At least 52 Palestinians have been killed since late March, mostly in the West Bank.

Among them are suspected armed fighters and also non-combatants, including Al Jazeera journalist Shireen Abu Akleh – a Palestinian-American dual national – who was covering an Israeli raid in Jenin.

Israeli security forces have launched near-daily raids in the West Bank following a spate of attacks in Israel in recent months.

Over the same period, 19 people – the majority Israeli civilians inside Israel – have been killed, mainly in attacks by Palestinians.