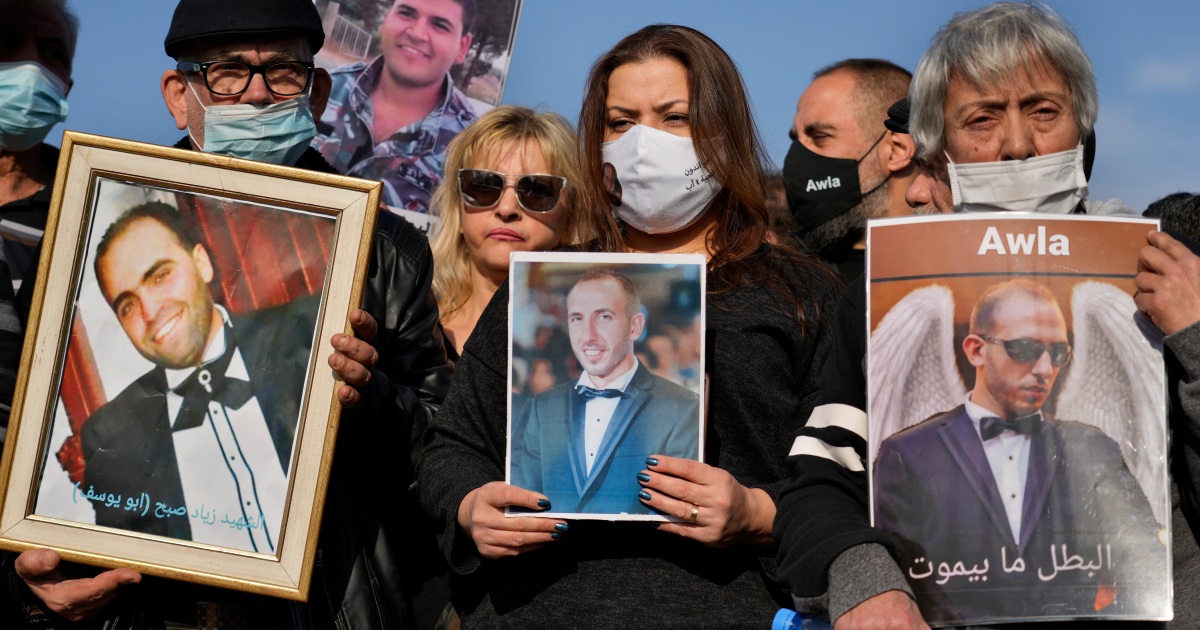 Legal cases abroad are giving survivors hope for justice amid a stalled Lebanese investigation, but they say an independent UN probe remains essential.

It has been a long two years for the families of the more than 200 people who were killed in the Beirut port explosion, but as the Lebanese investigation continues to be obstructed, the fight for justice could be picking up steam amid new legal cases launched from abroad.

Tania Dou-Alam and her husband Jean-Frederic Alam were attending an appointment at St George hospital, which overlooks Beirut port, on the evening of August 4, 2020, when 2,750 tonnes of ammonium nitrate ignited in a port warehouse – resulting in one of the largest non-nuclear explosions in history.

Freddie, as Dou-Alam affectionately refers to her husband, was killed instantly as the glass of the building shattered and threw them across the room.

Ever since the explosion, in which more than 7,000 people were also injured and much of the surrounding neighbourhoods were destroyed, Dou-Alam, and others who had family members killed, have unwaveringly called for justice.

“It makes me feel like I’m doing something for Freddie, because we owe him, we owe them all the truth and justice,” Dou-Alam said.

“This makes my life worth living because at a point I lost hope for everything; I was wondering why am I still here, we were sitting next to each other, then seconds later he was gone,” Dou-Alam said.

A large block of Beirut’s giant grain silos gutted by the explosion collapsed on Thursday as hundreds marched to the port. Families of the victims had demanded that the silos be kept as a testament to a blast they say was caused by widespread corruption and mismanagement.

The evidence that has emerged strongly suggests that high-ranking officials in government and the security forces knew about the risk from the ammonium nitrate stockpile and tacitly accepted it. Reports have also raised questions over the links between officials and offshore trade and cast doubt on the claims by companies involved in shipping the hazardous cargo.

But Lebanon’s investigation has been stymied by relentless political interference, including by Lebanese politicians filing more than 25 requests to dismiss the judges leading the investigation, starting with Judge Fadi Sawan, who was dismissed in February 2021.

His successor, Judge Tarek Bitar, has faced the same pressure and legal challenges, which has resulted in the investigation being suspended since December last year. Bitar had issued arrest warrants for some officials, although the security forces did not act on them.

With no sign that the domestic investigation will move forward soon, a civil case was filed in the United States in mid-July by the Swiss-based organisation Accountability Now. It is seeking $250m in damages for the survivors and also filed the case in the hope of uncovering new evidence that can push the Lebanese investigation and other international probes forward.

The legal action is seeking the damages from Texas-based TGS, a US-Norwegian geophysical services group, which owns the British firm Spectrum, the company that chartered the Moldovan-flagged Rhosus to ship the ammonium nitrate in 2013 – allegedly destined for Mozambique.

After carrying out the obligations under the contract, the trucks needed to be transported from Beirut to Jordan, and to do so, the Rhosus was purportedly chartered.

This is even though the Rhosus – with a maximum capacity of 964 tonnes – was already carrying 2,750 tonnes of ammonium nitrate allegedly destined for Mozambique and did not have the right ramps to load such heavy machinery weighing 160 tonnes.

Several investigations found that the Rhosus – impounded in Beirut port for months over a debt dispute and then safety fears over its rickety state – was reportedly at risk of sinking, and the ship had to offload its cargo of ammonium nitrate at the port in October 2014.

Lawyers and the victims’ families say the claim about collecting the trucks was a ploy to take the ammonium nitrate to Beirut and offload it there.

“It was already at three times its capacity when it arrived to Beirut … so it doesn’t make sense why this boat was chartered to Lebanon under the cover of seismic data machinery transportation,” Wakim said.

During the case, individuals in Lebanon may be summoned to questioning in the United States, and if they fail to appear they could be held in contempt of court with potential arrest warrants being issued.

“They will not be able to evade international justice … they might refuse to appear but they then would just have to stay in Lebanon as a golden cage until the winds shift,” Wakim said.

Freddie was an American citizen – as his and Dou-Alam’s two sons are US-born and she has a green card, she and her children were able to sign their names as plaintiffs in the case against TGS.

Dou-Alam feels the legal action in the US is a way for victims to be heard, considering “there’s a lack of concern all over the world regarding the explosion”.

Other relatives of victims have also joined the lawsuit.

Sarah Copland – the mother of two-year-old Isaac Oehlers, the youngest person to be killed in the explosion – says this year is especially hard for her and her husband.

“[Now it’s] two years, it won’t be much longer until Isaac has been gone longer than he was with us, because he was [only] two years and three months old, so that’s a huge thing weighing on my mind,” Copland told Al Jazeera.

Although Copland and her family lived less than a mile from the port in 2020, Isaac was born in New York and had US citizenship so Copland felt a sense of responsibility to join the lawsuit in Texas as a plaintiff on behalf of people in Lebanon whose only recourse is the domestic Lebanese process.

Plaintiffs say the evidence makes it clear that Spectrum either consciously participated in or it turned a blind eye to the events that brought the ammonium nitrate to the Port of Beirut.

“At best it’s negligent, at worst [there is a] nefarious dealing going on,” Copland said.

“There’s no money or anything that will make any of this better, but if damages are awarded the idea is that a victims’ fund would be set up, so it wouldn’t just benefit the plaintiffs in the case,” she said, adding it could help families focus on healing rather than day-to-day survival amid Lebanon’s unprecedented economic crisis.

TGS did not respond to a request for comment by Al Jazeera, but has previously said that it denies all allegations in the lawsuit and intends to fight them in court. 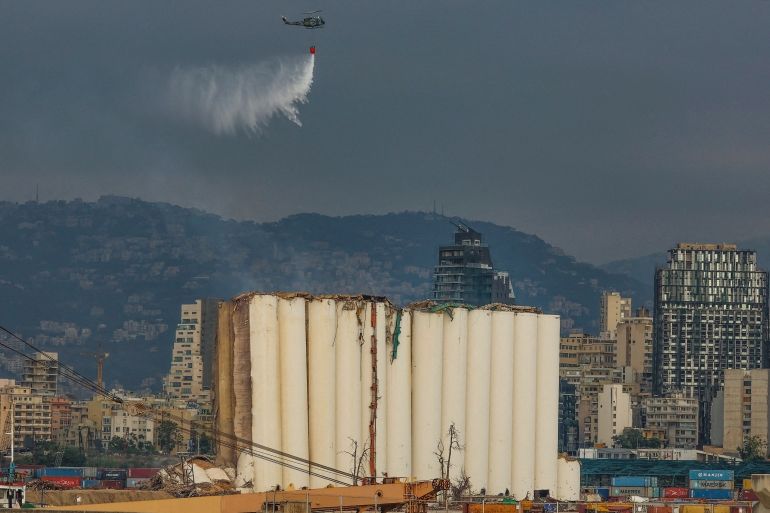 A helicopter drops water over the partially collapsed Beirut grain silos, damaged in the August 2020 port blast, on July 31, 2022

Another major international lawsuit filed by the Beirut Bar Association earlier in the year is continuing in the United Kingdom’s High Court of Justice regarding Savaro Ltd, the company suspected of importing the ammonium nitrate from the Georgian chemicals factory Rustavi Azot.

Savaro Ltd, now seemingly inactive, has been given a September 20 deadline to reveal its still unclear ownership, and if it fails to comply, a contempt of court order against the company can be filed, which would result in criminal proceedings.

Al Jazeera was unable to reach Savaro Ltd for comment.

Meanwhile, there are also local prosecutions in France, Germany, and the Netherlands regarding the death of diplomats in the explosion, but as well as being dependent on the domestic investigation to reveal findings, advocates say these countries would also benefit from a separate United Nations Human Rights Council (HRC) fact-finding mission.

Lawyers and families of the victims have been calling for such an investigation since the explosion happened, to no avail.

The UN said in the aftermath that it “support calls for a prompt, impartial, credible and independent investigation based on human rights principles, to examine all claims, concerns and needs in relation to the explosion as well as the underlying human rights failures”.

But it has not instigated its own investigation, and advocates for justice over the blast say their letter to the High Commissioner of Human Rights calling for a UN investigation went unanswered.

On the second anniversary of the explosion, survivors and families of those killed and several organisations including Human Rights Watch, Amnesty International, Legal Action Worldwide, Legal Agenda and the International Commission of Jurists have sent another letter to the UN HRC to urge an independent fact-finding mission to Lebanon.

Legal Action Worldwide Executive Director Antonia Mulvey told Al Jazeera it is more urgent than ever for this resolution to be tabled in the UNHRC at its next session in September considering “the total failure” of the domestic investigation.

But as Human Rights Watch pointed out at the start of July, France is the barrier to tabling a resolution in the HRC as President Emmanuel Macron is unwilling to take the lead, and most member states look to Paris to do so considering its historical ties to Lebanon.

“It’s shameful the member states haven’t yet placed this as a resolution, it’s clearly a human rights issue, the very basis of human rights is the right to life,” Mulvey said.

France’s stance is a sore point for families, considering Macron came to Lebanon two days after the blast promising to help the people of Lebanon in the absence of a government, and personally called for an “international, open, transparent probe” into the cause of such devastation.

“It’s vital that President Macron follows up on his original statements requesting an independent and fair investigation,” Mulvey said. “France must listen to the call of the victims.”

As a mother who had her son taken away from her in a split second, Copland finds it incredibly frustrating that the call for a UN investigation keeps being ignored.

“As long as I don’t have Isaac, there will always be a huge hole in our lives, but, I think as long as [we] have to expend energy on fighting for justice it means [we] can’t just focus on processing on all the feelings and grief,” Copland said.

Dou-Alam is confident justice will be delivered soon, solely due to how brave and courageous all the families of the victims are, to stand up against impunity.

“Whenever you have evidence and you have people ready to fight, justice will come, even if it’s not going to be very quick, it will come,” she said.