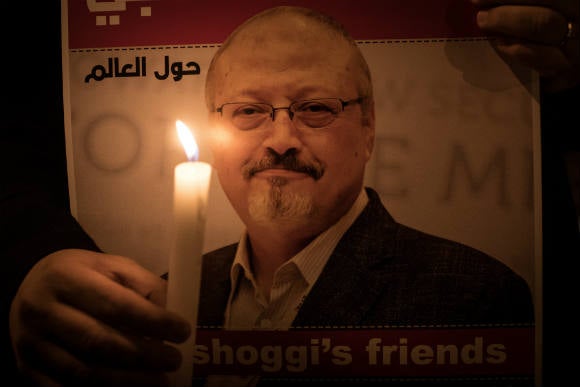 The Washington, D.C., city council unanimously passed a bill this week to name part of the street outside the Saudi Arabia embassy in the city "Jamal Khashoggi Way," after the Washington Post journalist who was killed in 2018.

The Washington, D.C., city council unanimously passed a bill this week to name part of the street outside the Saudi Arabia embassy in the city "Jamal Khashoggi Way," after the Washington Post journalist who was killed in 2018.

The bill was first proposed in January and received broad support, with city council members praising the renaming of the 600 block of New Hampshire Avenue after a journalist who reported on corruption and abuse in Saudi Arabia before he was killed on Oct. 2, 2018, in the Saudi consulate in Istanbul, Turkey.

Renaming the street "is a statement of support for freedom of the press and, because of the location, a condemnation of the actions of the Saudi government," the council concluded in a November report.

The bill will need to be approved by the mayor and undergo congressional review before it becomes law to formally recognize the renaming of the street between Virginia Avenue northwest and F Street northwest.

The Washington Post, the National Press Club and the Council on Islamic-American Relations are among a number of organizations that testified in support of the bill.

Democracy in the Arab World Now, or DAWN, which was founded by Khashoggi, urged the council before the vote to approve the bill.

"A street name designation may seem like a trivial matter to some folks, but I believe that you all understand how this specific designation will have a profound impact at a local, national, and international level," wrote Raed Jarrar, the advocacy director at DAWN, in a letter to the council.

Khashoggi was a Saudi-born journalist and American citizen who reported on affairs in the Middle Eastern country for most of his career. Leading up to his death, Khashoggi was writing opinion columns critical of the Saudi government.

The CIA and the U.N. concluded that Saudi Arabia's Crown Prince Mohammed bin Salman, and his government, orchestrated the murder of Khashoggi.

Saudi Arabia's government has denied involvement and held a trial in 2019 that sentenced five people to death for Khashoggi's murder.