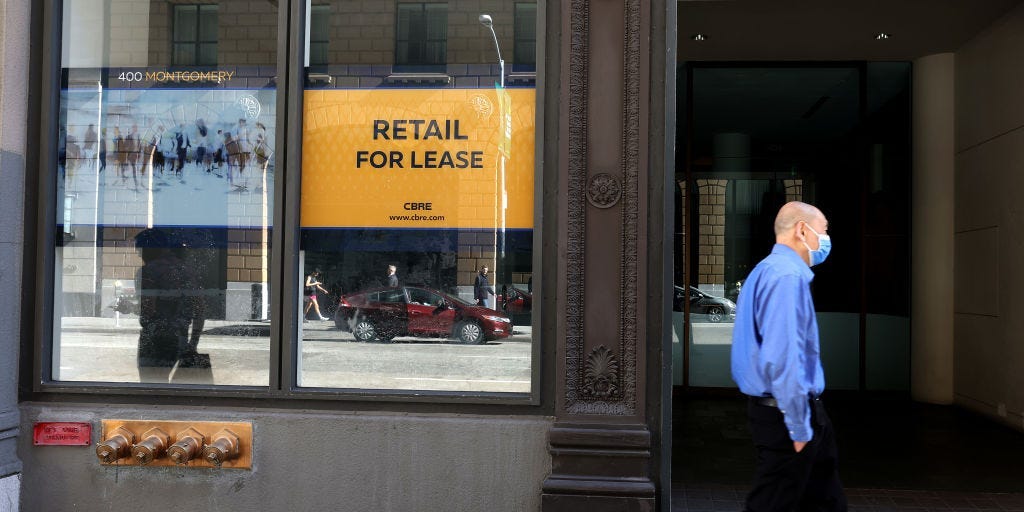 The tech exodus from San Francisco should be a warning to other cities that rely on tech companies to fill downtown office space.
San Francisco's once bustling downtown has become a ghost town as companies have left their offices. The city's office-vacancy rate grew by more than 4 percentage points from November 2021 to November 2022, to about 19%, according to Commercial Observer.

The exodus also is a double-edged sword that threatens San Francisco's financial health. A New York Times report published this month highlighted that local businesses like Mixt, a health-food restaurant, have struggled to maintain their business because high-income workers are no longer flocking downtown for their morning coffee or lunch salad.

Mayor London Breed has estimated that falling commercial property values could contribute to a $728 million budget gap over the next two fiscal years, Bloomberg reported.

Meanwhile, layoffs have piled up at companies like Adobe, which reportedly laid off 100 employees from its marketing department in early December, and Airtable, which told TechCrunch on December 8 that it had cut 20% of its workforce. This suggests San Francisco's struggles with office vacancies may be far from over.

"The challenge in all of this is that we're kind of rebuilding to something that doesn't necessarily exist," Jeff Bellisario, the executive director of the Bay Area Council Economic Institute, told Bloomberg. "What does the new San Francisco look like? And I'm not sure we've totally figured that out yet."
Here's a roundup of major office moves in San Francisco from 2022 that indicate how dire the situation is:

Snap: Snap Inc., the company that owns Snapchat, terminated the lease on its 33,000-square-foot office in October. The company is going through a restructuring, which has included laying off more than 1,200 employees.

Twitter: People close to Twitter told The Times this month that Twitter had stopped paying rent at its headquarters at 1355 Market St. as the company, now run by Elon Musk, seeks to cut costs to improve its profitability. The paper also reported in late November that Twitter's staff dwindled from around 7,500 full-time employees to less than 3,700 since Musk took over in late October.

Meta: The Silicon Valley Business Journal reported in early December that Meta, the parent company of Facebook, was planning to part with its more than 430,000-square-foot office space at 181 Fremont St. despite having eight years left on its lease. Meta leases more than 1.2 million square feet of office space in the San Francisco Bay Area, and CEO Mark Zuckerberg told investors during its third-quarter earnings call that it planned to spend up to $3 billion over the next two years to reduce its total office footprint by buying out leases.

Block: The San Francisco Chronicle reported in June that Block, the payment-processing company owned by Jack Dorsey, the former CEO of Twitter, did not plan to renew its lease at the end of the year for a 470,000-square-foot office in the Mid-Market neighborhood as the company embraced working from home.

Salesforce: The San Francisco Business Times reported in July that the software behemoth Salesforce was making more than 412,000 square feet of office space in its headquarters available to sublease as the company embraced a strategy it called "Success from anywhere. Careers everywhere."

Lyft: The San Francisco Business Times reported in August that the ride-hailing firm Lyft planned to let go of 250,000 square feet of office space at its Berry Street headquarters over the next year, reducing the company's total space leased in the city by more than half.

PayPal: The local news outlet ABC7 reported in April that the digital payments processor PayPal planned to close its Market Street office on June 3, leaving PayPal with no footprint in the city.