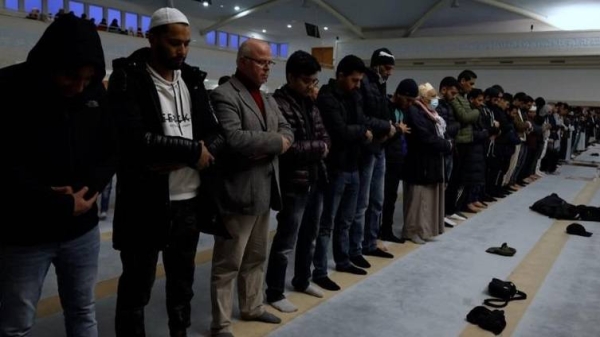 Hiba Latreche took a last gulp of water and reached for a date, her eyes flitting between the plates of food before her and her phone screen as it blinked toward 5:42 a.m., the beginning of her fast.
This year, the month of Ramadan coincides with the presidential elections in France, the climax of a campaign that has been marked by anti-Muslim vitriol on a scale not seen for decades.

As France goes to the polls for the presidential run-off on April 24, many French Muslims like Latreche have been facing a difficult question: Do these would-be presidents really represent my interests?

Considering the candidates who entered the race, the answer for many is no.

Eric Zemmour, a former TV pundit convicted three times for hate speech, racial or religious hatred, has said he wants to "save France" from Islam. Center-right candidate Valerie Pecresse declared the headscarf a "sign of a woman's submission," claiming with a nationalistic flourish that "Marianne is not a veiled woman."

Zemmour and Pecresse polled fourth and fifth, respectively, in the first round and have been eliminated.

Even Macron found time in his only campaign rally before the first round vote to highlight the threat of Islamists and Muslim "separatists" in France, entwining France's motto of "Liberté, Égalité, Fraternité" (liberty, equality, brotherhood) with another favored French Republican value: Laicité (secularism).

Only one candidate, the third-placed far-left politician Jean-Luc Melenchon, has historically taken a position more supportive of the Muslim community. First round polling by Ifop suggested that some two thirds of French Muslim voters backed him. He too was eliminated after the first round of voting.

"What's really scary with this upcoming election is that most of the (top) candidates simply rely on programs based on stigmatization of minorities, on the erosion of our most basic rights and freedom," Latreche, a law student, said ahead of the first round.

With the "normalization of Islamophobia, we directly face the consequences," added Latreche, who is also a vocal activist for the civil liberties of young Muslim women.

The French political landscape this year is vastly different from just a few elections ago. With the country's traditionally heavyweight center-left and center-right forces struggling, the political extremes have profited.

In the first round of the presidential election on April 10, Le Pen and Zemmour, the two far-right candidates with the most extreme policies affecting the lives of Muslims in France, ​together ​collected just over 30% of the total votes; Le Pen ​alone received enough votes to enter the runoff with 23% ​of the first round votes​. Their surge has been accompanied by a clamor of anti-immigrant and anti-Islam narratives that have dominated much of the debate and coverage.

Strasbourg's Grand Mosque -- the largest in France -- sits tucked discreetly away on a riverbank in the eastern border city.

Many of the worshipers there say they don't feel represented by any of the dozens of candidates who competed​ for the presidency in the first round.

"We're constantly being marginalized, excluded from society and then being told that we're not taking part in society," said Latreche. Being refused agency and choice over her own life and contribution to society, she felt, inevitably had a negative effect on her mental health and that of her friends, she added.

As he entered for evening prayers, Wagner Dino expressed dismay at the choice of candidates.

"There is no one who presents himself, who really has the necessary parameters to put everything in place, to have a France united with Muslims," he said.

Mosque volunteer Safia Abdouni said she believes none of the candidates "know what we are going through, our daily life and what we really need."

Yet Saïd Aalla, the president of the Grand Mosque, said that if young Muslims "want to change the situation, that can only happen with the vote."

Aalla did not express a preference for any of the contenders. As a cleric, he's prohibited by French law from publicly backing a political candidate.

In successive election seasons, hijabs and Muslim women's headscarves have been easy targets for politicians trying to fire up support for traditional French Republican values.

"Laicité" -- or secularism -- claims to ensure equality for all by removing markers of difference, rendering all citizens French first and protecting freedom of worship in the private sphere. Religious symbols are banned in ​primary and secondary schools, public office and state places of work, as well as even in some sports federations.

"Laicité per se is not a problem," according to Rim-Sarah Alouane, a PhD candidate in comparative law at the University Toulouse-Capitole and a specialist on religious freedoms and human rights in Europe.

"Laicité has been transformed (and) has been weaponized as a tool for political identity in order to target the visibility of Muslims in France, of French Muslims, and especially Muslim women, and the wearing of the headscarf. So it's more of the modern illiberal interpretation of laicité that is problematic, than laicité itself," she said.

Le Pen and Zemmour both proposed banning ​what they refer to as "the hijab," but neither campaign has offered detail on what exactly such a ban would encompass, or how it would be enforced. In her campaign manifesto, Le Pen has proposed banning in public all "Islamic attire," a definition that critics say is open to arbitrary and imprecise interpretation. The French government has already banned women from wearing the niqab -- a full-face veil with an opening for the eyes.

The Macron government reacted furiously to a diversity campaign funded in part by the European Union last year, which depicted pictures of women wearing the headscarves superimposed over the same images without the head covering. The campaign tagline was, "Beauty is in diversity, as freedom is in hijab."

The French government demanded an investigation into the campaign and its withdrawal in France. In the words of one minister: "We can't confuse religious freedom and a campaign for the promotion of the hijab, it's not acceptable."

Last month, the French Supreme Court ruled that local bar associations can ban headscarves, and other "religious symbols," from courtrooms in the name of secularism -- forcing hijab-wearing women like Latreche to choose between their career and ​the public practice of ​their faith.

"It's actually extremely demotivating and disheartening to see that, you know, we wouldn't be able to help to contribute to society and to make it more vibrant despite our abilities," Latreche said, "just because we are choosing to exercise our rights.

"We (should) have control over our own rights and bodies and beliefs," she said.

Ludwig Knoepffler, a member of Le Pen's campaign team, denied that Le Pen's ​anti-hijab platform is done "in the name of laicité." Rather, he ​​said the intent was to combat totalitarianism.

"The idea is to fight the hijab as a political tool used and promoted by Islamist militants," he said. "If you believe that the Islamist political project is indeed totalitarian, then you have to fight its distinctive signs. The same way you would ban the swastika in the public sphere, as is the case already."

Le Pen addressed the topic during the presidential debate Wednesday night, calling the headscarf "a uniform imposed by the Islamists."

Macron accused her of creating a "system of equivalence" among Islamism, terrorism and foreigners that would "create civil war."

Aalla, the mosque president, said France's Muslims have the same aspirations as other citizens.

"The Muslims of France have been here for several generations, but we still continue to regard them as strangers," he said.

Aalla decried the idea of a "Muslim vote." There are Muslims who support all French parties, he said -- people that hope to be taken into consideration by politicians, particularly regarding religious freedoms.

For legal scholar Alouane, debate about the ​headscarf​ is a fearmongering distraction: "I mean, we have inflation, the price of energy has increased massively, there is poverty, our public services are being dismantled, unemployment and so on... and all we talk about, is a piece of cloth that women wear... like, seriously."

Aalla said that French Muslims expect France and French society to devote themselves to economic, social questions, to those of housing or discrimination, the questions "that all citizens, Muslims included, expect from their new president."

But for the French citizens and voters gathering to pray and break their fast amid a darkening political atmosphere, the hopes of many in their community can be summed up in one phrase: "Liberté, égalité, fraternité."
Add Comment