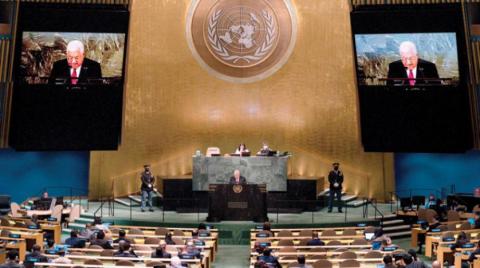 Palestinian President Mahmoud Abbas has submitted to UN Secretary-General Antonio Guterres an official request to implement Resolution 181 adopted by the General Assembly in 1947, which is the basis for the two-state solution.
Abbas informed world leaders and senior officials participating in the high-level meeting of the 77th annual session of the United Nations General Assembly of his talks with Guterres.

However, "the real test of the seriousness and credibility of this position is for the Israeli government to sit down at the negotiating table immediately, to implement the two-state solution," added Abbas.

He recalled that Israel's commitment to implement Resolutions 181 and 194 was a condition for the acceptance of its membership in the international organization, asking in the event of Israel's refusal to comply and the failure to implement these two resolutions, "to impose sanctions on it and suspend its membership in the international organization."

The President added, "We do not accept that we remain the only party that adheres to the agreements we signed with Israel in 1993, agreements that no longer exist on the ground due to Israel's continued violation of them."

Abbas said Israel, which deliberately obstructs progress towards a two-state solution and "disavows the resolutions of international legitimacy, has decided not to be our partner in the peace process."

Despite Palestine's demand for Israel to end its occupation, stop its aggressive measures and policies, and end all unilateral actions that were stipulated in the Oslo Accords, Tel Aviv has continued to perpetuate this occupation and these measures and procedures, said the President, adding that it left "us no option but to reconsider our entire relationship with it."

He pointed out that if attempts continue to obstruct Palestine's endeavors to obtain a full UN membership, protect the Palestinian people, their rights and state, and adopt practical steps to end the occupation and achieve peace, it becomes imperative to go to the General Assembly again for a referendum on the legal measures and political actions that must be adopted to reach that end.

The President concluded that Palestine "yearns for peace, so let us make this peace to live in security, stability, and prosperity, for the sake of our generations and all the peoples of the region."

The prime minister stressed Kuwait's unwavering stance in support of the principles of international law and the UN charter in opposition to the use of force, or threats for its use, in resolving conflicts.

He said that Kuwait supports UN and global efforts for de-escalation and a ceasefire to resolve the conflict peacefully.

The PM called on Iran to take "serious measures" to build trust and dialogue with its Gulf neighbors, based on the respect for sovereignty and non-intervention in internal affairs, and for Tehran to limit tensions and safeguard the security and freedom of marine navigation in Gulf waters.

He warned that tensions and instability would remain prevalent in the region as long as the Palestinian people do not gain their legitimate rights and Israel, as an occupational power, does not stop its ongoing encroachments on international humanitarian law.

Bahrain is continuing its reform and diplomatic approach that "supports international partnership in consolidating the values of peace, tolerance, and peaceful coexistence, rejecting extremism, hatred, and terrorism," he said.

He said that the Kingdom believes that achieving a just and comprehensive peace in the Middle East region depends primarily on settling the Palestinian-Israeli conflict following the two-state solution, resolutions of international legitimacy, and the Arab Peace Initiative.

Zayani indicated that Iran must abide by the UN charter, international law, principles of good neighborliness, and non-interference in the affairs of other countries.

He urged Iran to cooperate with the International Atomic Energy Agency and work to make the Middle East region, including the Arabian Gulf, a zone free of weapons of mass destruction.

The UN Secretary-General, Antonio Guterres, urged Member States to support the UN Relief and Works Agency for Palestine Refugees in the Near East (UNRWA), telling them "don't let this collective responsibility assumed by the General Assembly to fail."

Guterres was speaking at the ministerial meeting cohosted by Jordan and Sweden to explore lasting solutions for closing the chronic funding gap of the UNRWA.

For his part, UNRWA Commissioner-General Philippe Lazzarini expressed his gratitude to the countries for their participation in supporting the Agency and their determination to enable UNRWA to fulfill its mission.

He lauded the efforts of Jordan and Sweden, in particular, to enlist the international community's continued commitment to the Agency and the refugees.

"We are here because we all believe that, in the absence of a genuine political solution, UNRWA is irreplaceable in this part of the world," he said, adding that political will is required to translate the support for the mandate into matching financial resources.
#Joe Biden  #Covid
Add Comment