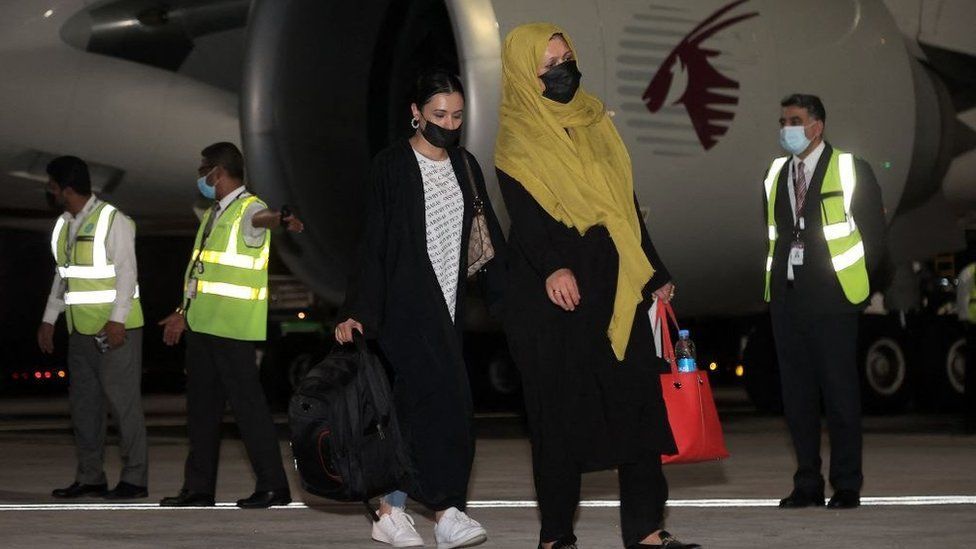 Afghanistan: First foreigners fly out of Kabul since US pull-out

Dozens of international passengers - including UK citizens - have flown out of Kabul in the first such flight since US forces left the country.

The Qatar Airways charter flight landed in the Qatari capital Doha on Thursday, with a second flight due on Friday.

US Secretary of State Antony Blinken urged help with evacuations during a recent visit to Qatar.

Hundreds of Afghan citizens who had helped the US military were unable to get out in last month's US airlift.

Reuters news agency reports that 113 people were on the plane.

The White House released a statement confirming that US citizens had flown, and also thanked Qatar, saying the flight was the result of "careful and hard diplomacy and engagement".

It said the Taliban had been "businesslike and professional" in helping the US citizens fly out.

Canada has also confirmed that 43 of its citizens were on the flight, while the Netherlands said 13 of its nationals were on board.

In a press conference held at the airport, Qatari special envoy Mutlaq bin Majed Al Qahtani described Kabul international airport as operational and said it was a historic day for Afghanistan.

The flights are the first to leave since the rushed US military-led evacuations finished last month, following the Taliban takeover of the country on 15 August.

More than 124,000 foreigners and Afghans fearful of Taliban retribution were flown out of the country.

Around 100 US citizens were thought to be left in Afghanistan before the flight. 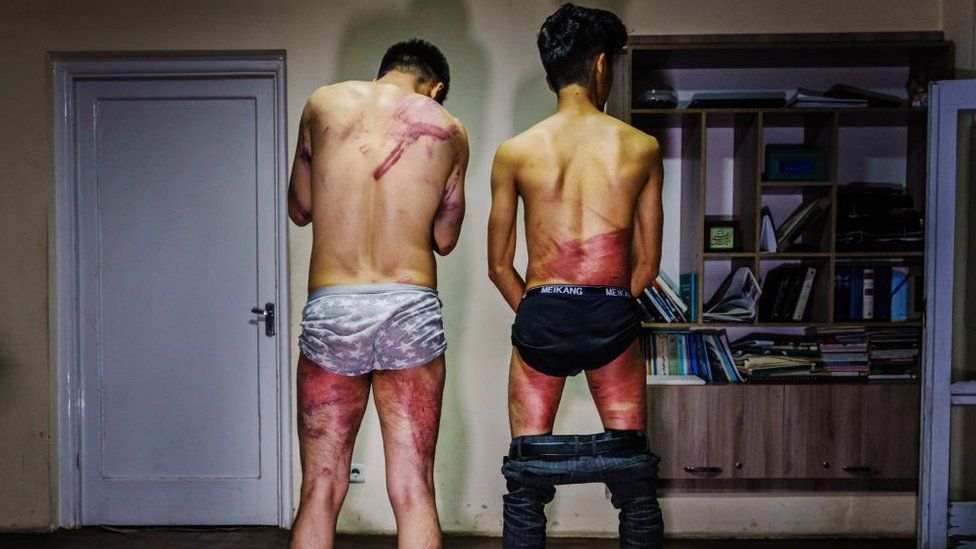 They are reported to have been badly beaten after being arrested by the Taliban in Kabul.

"One of the Taliban put his foot on my head, crushed my face against the concrete," photographer Nematullah Naqdi told AFP news agency. "They kicked me in the head... I thought they were going to kill me."

Mr Naqdi was covering a protest by women in front of a police station with his colleague at the local Etilaatroz newspaper, Taqi Darybai.

The Taliban have banned protests unless authorised by the justice ministry.

But dozens of demonstrators chanting "we want freedom" gathered near the Pakistan embassy in Kabul and Taliban gunmen opened fire to disperse them, protesters said.

Local media have also reported another protest by women in Kapisa province, north-east of Kabul. Sources told Aamaj news that several women had been arrested.

BBC Dari heard from a number of Afghans about the demonstrations.

But Alazay from the southern province of Helmand called for other countries to recognise the Taliban government.

"If that happens, our lives are going to be much easier. If the protests continue and the Taliban suppress them, the international community will not recognise the Taliban's new government and do you know who will suffer? We, the people."

On Wednesday, dozens of women in Kabul and the north-eastern province of Badakhshan protested against the formation of the all-male interim Taliban government.

Some women, calling for the inclusion of female ministers in the government, were reportedly beaten before the demonstrations were broken up.

Three people were killed during a demonstration in the western city of Herat on Tuesday. The Taliban have denied that they were behind the violence.

Meanwhile, there are reports that the internet was temporarily taken down in parts of Kabul.

Afghan journalist Bilal Sarwary tweeted that several sources in the telecom sector had confirmed to him that the Taliban had ordered mobile phone internet coverage to be turned off temporarily in several districts.

Journalist Habib Khan later tweeted that the internet had been restored in the city.

And separately, social media footage has emerged from the Panjshir valley said to show the desecration of the mausoleum of the well-known former anti-Taliban alliance leader, Ahmed Shah Massoud.

The Taliban said on Tuesday they had taken the valley - the last region of Afghanistan holding out against their rule - from the Afghanistan National Resistance Front. The NRF, led by Ahmed Shah Massoud's son, said they would continue to fight.