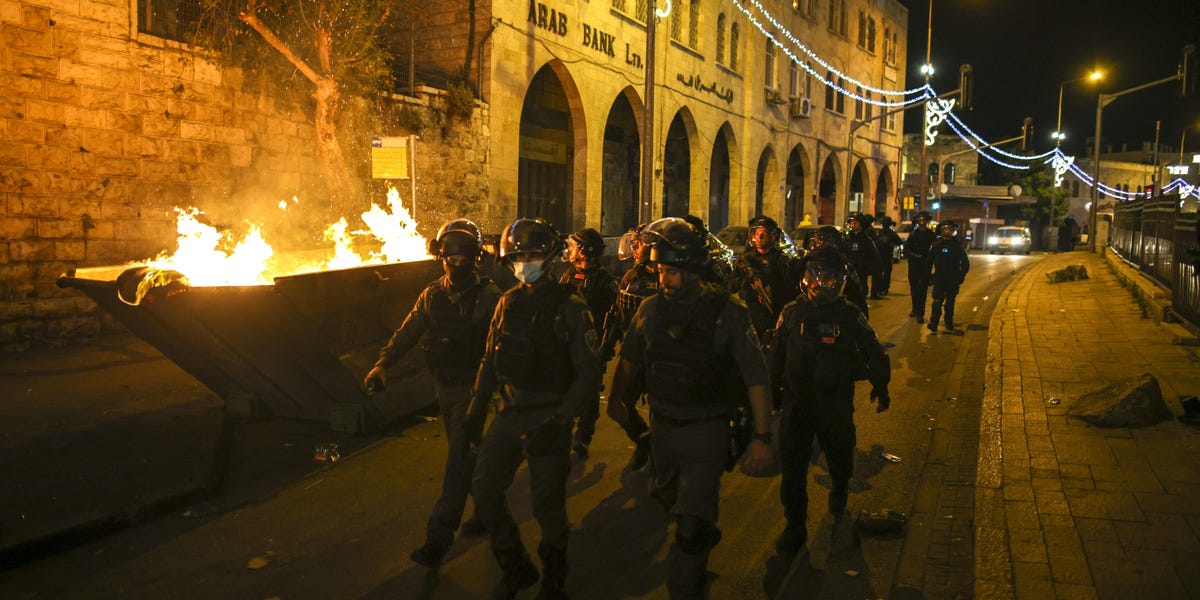 After a Jewish supremacist mob chanted 'death to the Arabs' in a night of violence in Jerusalem, Palestinian militants in Gaza bombarded Israel with rockets

Underground infrastructure and rocket launchers belonging to Hamas were destroyed in the targeted attack, according to the Israel Defense Forces (IDF).

The strikes were in response to some 36 rockets being fired into southern Israel overnight, AP said. Six of the three dozen rockets fired were intercepted by Israel's Iron Dome Aerial Defense System, the IDF said on Twitter.

Some of the rockets fell in Israeli communities near the Strip and air-raid sirens blared throughout the night but no serious damage or injuries were reported, The Times of Israel said.

Two militant groups in Gaza claimed responsibility for the rocket fire — Fatah's al-Aqsa Martyrs' Brigade, designated as a terrorist organization by the United States, and the Abu Ali Mustapha Brigades. Hamas did not take responsibility for the attacks, but Israel holds the enemy group accountable for all rockets launched from the Gaza Strip, AP reported.

The fire exchange comes as tensions reached a boiling point in Jerusalem on Thursday evening. The situation first escalated when Israeli police placed barricades outside the Damascus Gate entrance to Jerusalem's Old City — a popular nightly gathering point with local Palestinians after the end of the Ramadan fast.

Palestinian protesters gathered near the entrance and threw glass bottles and rocks at police, CNN reported. Israeli police responded by using stun grenades, rubber bullets, and water cannons in a bid to disperse the crowds, the media outlet said.

Around 100 Palestinians were injured, according to the Palestinian Red Crescent.

Meanwhile, police blocked supporters of a far-right Jewish group, several hundred strong, as they marched through the Jerusalem streets towards the Damascus Gate. Some of the followers of the 'Lehava' group chanted "death to Arabs," reported to CNN.

Lehava is an anti-Arab Jewish supremacist group, according to the Washington Post.

In the ensuing chaos, Israeli police clashed with both groups. In other incidents, Jewish youths attempted to set fire to a Palestinian family's home and a Jewish motorist was beaten and his car set ablaze by a Palestinian mob.

Clashes in Jerusalem have occurred nightly throughout the Muslim holy month of Ramadan, AP said.

The US Embassy in Jerusalem said in a Friday statement that it is "deeply concerned" about the violence over the last several days. "We hope all responsible voices will promote an end to incitement, a return to calm, and respect for the safety and dignity of everyone in Jerusalem," it said.
Add Comment