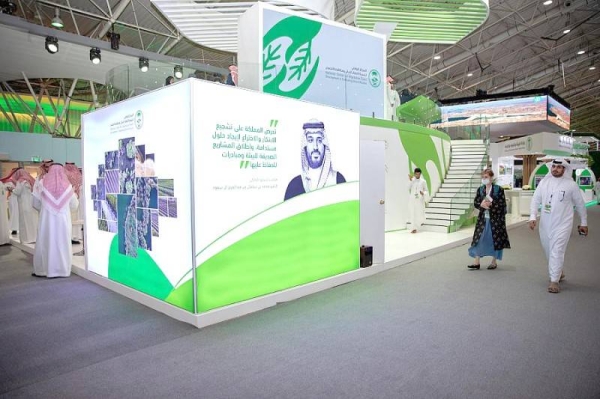 Al-Fadhli in his speech at the opening ceremony, thanked the Crown Prince for his patronage of the event, which reflects the keenness of the Saudi leadership to preserve and develop the environment, especially the vegetation cover, which is a fundamental pillar of the environment and wildlife, citing the Crown Prince’s "Saudi Green and the Middle East Green Initiatives".

"The Kingdom is moving towards achieving a qualitative and unprecedented leap in the Middle East in environmental protection and vegetation development, with such pioneering and ambitious initiatives locally and regionally.

“The initiatives effects will be reflected globally in reducing desertification and enhancing biodiversity, and pushes towards a cleaner and more sustainable future, thus improve human quality of life and enhance well-being,” the minister said.

Al-Fadhli underlined the keenness and support of the Crown Prince to encourage innovation, stimulate young Saudi minds, and their determination in environment protection and the development of vegetation cover.

He indicated that this exhibition enhances the exchange of expertise and access to the experiences of other countries, to benefit from them and reflect them on the local environment.

The National Center for Vegetation Development and Combating Desertification CEO Dr. Khalid Al-Abdulqader said the exhibition and the international forum on afforestation techniques aims to converge visions, experiences, opinions, and ideas of a group of specialists, experts and environmentalists.

It also brings together parties concerned with vegetation cover and combating desertification, afforestation techniques, and investment in parks and reserves, adding that more than 90 speakers from 20 countries and organizations around the world, will engage in 20 dialogue sessions and workshops discussing more than 50 scientific papers.

Al-Abdulqader added that the exhibition and the international forum will build bridges of communication between more than 80 exhibitors from government agencies, the private sector, international organizations and bodies, and environmental associations to display their projects and products and qualitative innovations.

To that end, Deputy Executive Secretary of the UN Convention to Combat Desertification (UNCCD) Andrea Meza stressed — via video communication —the importance of the exhibition in preserving the environment and combating desertification.

For his part, the Director-General of the National Agency for Water and Forests (ANEF) in Morocco Abderrahim Houmy expressed his pleasure at participating in the opening session of the exhibition and the international forum on afforestation technology within the framework of achieving the Kingdom’s Vision 2030 and the “Saudi Green” and “Middle East Green” initiatives.

Meanwhile, NEOM CEO Eng. Nadhmi Al-Nasr announced during the opening session an initiative launched by NEOM in cooperation with the national center to plant 100 million local trees as part of the 10 billion trees that will be planted around the world, and rehabilitate 1.5 million hectares of land and natural reserves and wildlife habitat restoration in NEOM.

"We are committed to the project, under the leadership of Crown Prince Mohammed Bin Salman, chairman of the Board of Directors, that 55% of the city will be a natural area, and we are working hard in this strategic direction in coordination with the Ministry of Environment, Water and Agriculture and based on many studies and scientific research, we believe that the final results will improve our position."
Add Comment