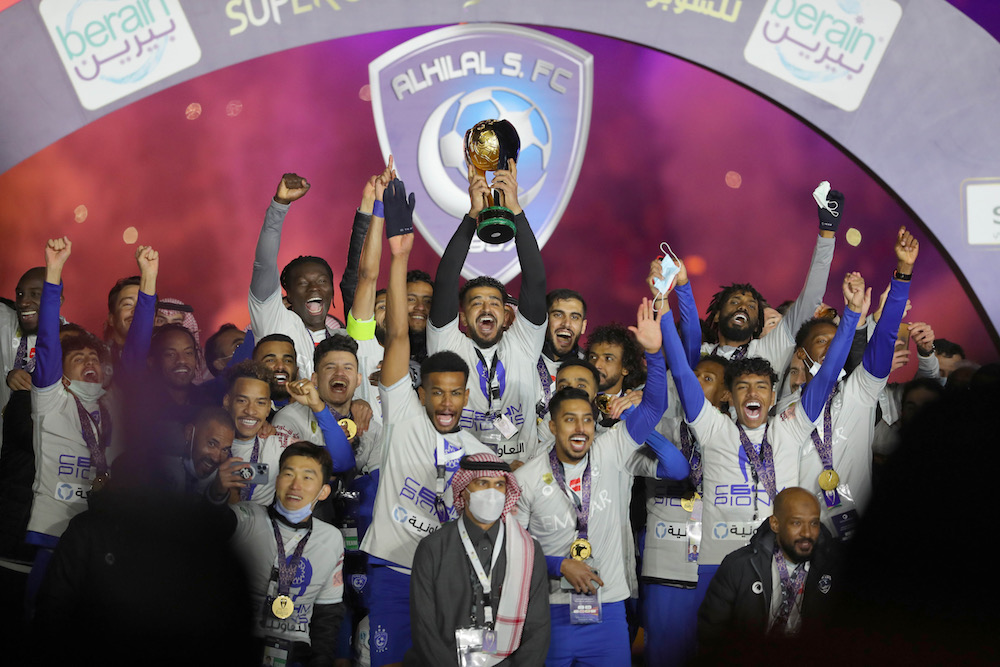 Al-Hilal on Thursday lifted the Saudi Super Cup for a record third time, defeating 10-man Al-Faisaly 4-3 in a penalty shootout after 90 minutes of exciting action ended with the scoreline tied 2-2.
The heroes for the victors were Salem Al-Dawsari, who scored a magnificent goal to get Al-Hilal back in the game, and goalkeeper Abdullah Al-Mayouf, who saved two during the penalty shootout, with the decisive stop denying Waleed Al-Ahmed.

The result was hard on Al-Faisaly, who had played their part in making the annual clash between the Saudi Pro League champions and the King’s Cup holders an exciting contest.

Mohammed Al-Amri and Romain Amalfitano had put the side, who are currently battling the prospect of relegation in the SPL, two goals ahead before the half-hour mark. But after Al-Dawsari pulled one back, and with the cup winners reduced to 10 men at the end of the first half when Julio Tavares received his marching orders, Al-Hilal took advantage shortly after the break with an equalizer from Yasser Al-Shahrani. The champions could not get the third goal they needed but held their nerve right to the end in the shootout.

The Super Cup is a second trophy in the space of six weeks for Leonardo Jardim’s men, who won the AFC Champions League trophy against Korea’s Pohang Steelers at the same venue, King Fahd International Stadium, in November. However, they faced a much tougher test this time.

Fans were treated to a breathless first half. In a repeat of last week’s SPL clash between the two sides Al-Hilal, who ended up winning that game 3-2, found themselves 2-0 down with a lot of work to do.

Al-Faisaly took the lead in spectacular fashion after 16 minutes, not long after Al-Hilal’s Brazilian playmaker Matheus Pereira had fired a shot straight at the keeper when put through on goal.

Al-Hilal managed to clear a corner from the left side but the ball fell to Al-Amri on the edge of the area and the defender chested the ball down and then lashed it into the top-left corner.

The league strugglers extended their advantage eight minutes later with another set piece, this time from a deeper position on the left side of the Al-Hilal half. Guilherme Augusto sent in an inswinging cross that was headed into the bottom corner of the goal by Frenchman Amalfitano, who had been an injury doubt ahead of the game.

Seven minutes before the break, the leaders almost pulled further ahead but Al-Mayouf got down well at his near post to palm a Guilherme shot out of play for a corner that came to nothing.

Then came a goal of stunning quality that put Al-Hilal back in the game. This time it was Mohammed Al-Breik doing the attacking and Guilherme the defending, and the right-back twisted the Brazilian inside out before chipping a cross into the area. Nobody expected what came next, as Al-Dawsari, standing on the penalty spot with his back to goal, launched himself into the air and sent the cleanest overhead kick you will see all year into the roof of the net.

If that put a spring into Al-Hilal’s step — with Yasser Al-Shahrani firing just over the bar soon after — there was even more bounce when, during first-half stoppage time, Al-Faisaly were reduced to 10 men. Star striker Tavares was found, after Dutch referee Danny Makkelie consulted the video monitor, to have slapped, or attempted to slap, defender Jang Hyun-soo and so the forward, who had delayed his departure to join up with Cape Verde at the African Cup of Nations so that he could play in the final, was shown a red card.

Al-Faisaly came out for the second half braced for an assault and tried at every opportunity to run down the clock. It was an understandable strategy though not a successful one; after 54 minutes, Al-Shahrani scored with the simplest of tap-ins after Moussa Marega escaped down the right and sent over a perfect square ball across the area. An Al-Hilal victory seemed inevitable.

Yet somehow Al-Faisaly had the ball in the net on the hour mark, courtesy of Guilherme. But after a review by the video assistant referee, the Brazilian was judged to have been offside by the narrowest of margins. The close call served as a reminder to the champions that the game was not yet won.

Al-Dawsari showed he is only human when, with 18 minutes remaining, he blasted over from inside the area after a header by Mohammed Kanoo rebounded off the crossbar. Soon after, a low shot on the turn from Bafetimbi Gomis forced a smart save from Mustafa Malayekah. Al-Faisaly continued to defend well and took the game into penalties.

Marega and Guilherme scored the first kicks for their respective teams, before substitute Abdullah Al-Hamdan’s “panenka” put Al-Hilal ahead, only for Ismael Silva Lima to keep his cool and draw Al-Faisaly level again. Al-Dawsari was next to find the net, sending Malayekah the wrong way.

Then came four misses in a row. Al-Mayouf got down low to save substitute Mohammed Al-Saiari’s effort and put Al-Hilal in the driving seat. Pereira then saw his shot saved but then Raphael Silva sent his wide.

Next up was Gomis, who could have won the cup for Al-Hilal but blasted over. Igor Rossi’s subsequent success meant sudden death. Salman Al-Faraj, the captain of the champions, stepped up and scored, and when Al-Ahmed’s attempt was saved it meant the cup was staying in Riyadh in Al-Hilal’s packed trophy cabinet.
Add Comment