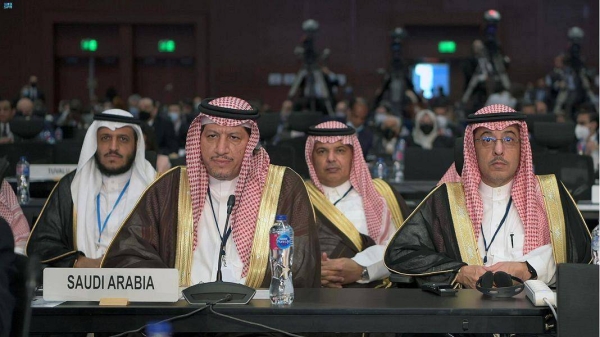 The ninth session of the Conference of States Parties to United Nations Convention against Corruption kicked off on Monday in Sharm El-Sheikh, Egypt, in the presence of Egyptian Prime Minister Mostafa Madbouly and ministers and representatives of state parties to the convention.
Saudi Arabia's delegation is headed by President of the Oversight and Anti-Corruption Authority (Nazaha) Mazin bin Ibrahim Al-Kahmous.

The session also included the participation of relevant international organizations, civil society institutions concerned with transparency, protecting integrity and anti-corruption with a total of 2,700 participants.

During the opening of the conference, Chairman of the Egyptian Administrative Control Authority Hassan Abdel-Shafi was elected president of the ninth session.

Attending the session through videoconferencing, UN Secretary-General Antonio Guterres called for global action to combat corruption. He considered the current session of the conference an important opportunity to take important global steps to fight corruption that to some extent increased during the COVID-19 pandemic.

The conference, over its sessions extending till Friday, will be addressing several issues, the most important of which is technical assistance and international cooperation, retrieving assets, reviewing the implementation of the United Nations Convention against Corruption, the role of law and its application in combating corruption and reviewing relevant top opportunities and main challenges.

The conference, which is considered the top international event concerned with anti-corruption, aims to improve the capacity of states to implement the convention, enhance cooperation among in achieving the objectives of the convention, help states assess legislations related to anti-corruption, and enhance transparency and integrity, and means to develop them.
#COVID-19  #Covid
Add Comment