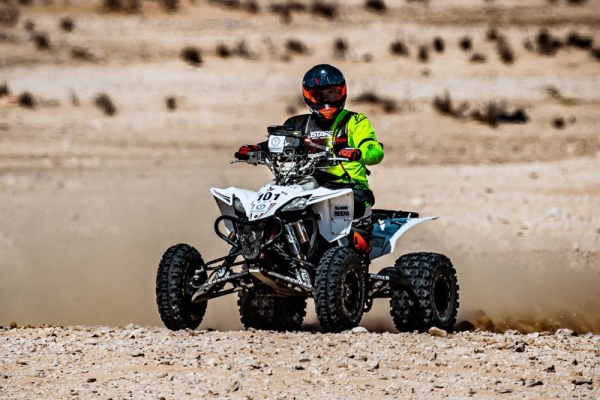 The UAE’s Mohammed Al-Balooshi, Saudi Arabia’s Haitham Al-Tuwaijri and Qatar’s Ahmed Al-Kuwari sealed outright victories in the motorcycle, quad and SSV sections of the Qatar International Baja after the third desert selective section that was held in punishing heat on Saturday.
MX Ride Dubai’s Mohammed Al-Balooshi delivered a polished performance over the closing 249.68km selective section that started at Al-Kharsaah and included a tricky final passage through the sand dunes near the Inland Sea, south of Doha, where temperatures rose into the low forties Centigrade.

He completed the grueling stage in just under nine minutes shy of five hours to seal a 10min 57sec victory over British youngster Robert Wallace in the motorcycle section. The latter’s consolation was sealing top spot in the FIM Juniors category.

Al-Balooshi said: “It was a very tough two stages but I am happy that we managed to bring the bike home and win this round of the FIM Bajas World Cup and extend our championship lead.

“I am a little bit disappointed that Abdullah Abuaisheh could not start because it is good to have your main rival competing. I thank him for letting me use his front wheel. I damaged mine.

“Now I will go to Portugal for the last round, which is double points. I started off with third in Dubai, a win in Jordan and a win here. But I have a torn ligament in my shoulder. I was nursing it home and managed to win. I probably only rode at 60 or 70%.”

The UK’s Andrew Newland rounded off the podium places and Kuwait’s Abdullah Al-Shatti overcame a fall to finish fourth. Richard Dors and Makis Rees-Stavros rode strongly on the final day to snatch fifth and sixth.

It was testament to his determination that he had completed the second stage in first position and managed to put his bike into Parc Ferme to restart, albeit with eight minutes of penalties later added to his time.

Saudi Arabia’s Haitham Al-Tuwaijri was the class of the quad field from the start and the Yamaha rider extended his lead in the FIM Bajas World Cup with an emphatic win. Hani Al-Noumesi’s mechnical issues paved the way for Sultan Al-Masoud to finish second in the category.

Ahmed and Nasser Al-Kuwari showed their talent by completely dominating the SSV category in a Yamaha YXZ 1000R. The Qatari duo were the class of the entire Baja and faster than all the motorcycles to boot.Al-Kuwari reached the finish nearly three hours ahead of nearest SSV rival Abdullah Al-Khelaifi and was a staggering 2hr 03min 24sec in front of the leading motorcycle. Khalid Al-Mohannadi brought his Polaris home in third.

“It was a nice rally and my brother Nasser and I enjoyed every moment,” said Al-Kuwari. “He did a great job with the navigation. We never got lost, just a few turns when we may have been over speeding.

“It was a very good job. I was concentrating on bringing the car home and getting no punctures. We had a nice rhythm. Now I have unfinished business in Dakar. Hopefully we can go there now.”

There were several strong performances in the over-450cc motorcycle section, although these riders were not able to score FIM Baja World Cup points.

Saudi Arabia’s Ahmed Al-Jaber started the final stage with a 16-second cushion over Brett Hunt but it was the British enduro rider who managed to top the class rankings by 7min 51sec after an excellent final passage through the dunes.

Several riders became stuck in the sand in the heat and the recovery crews were busy during the afternoon. Britons, Harry Michael, Hugh Mackay and Joseph Dann, all took a rest in the shade before continuing towards the stage finish.
Add Comment