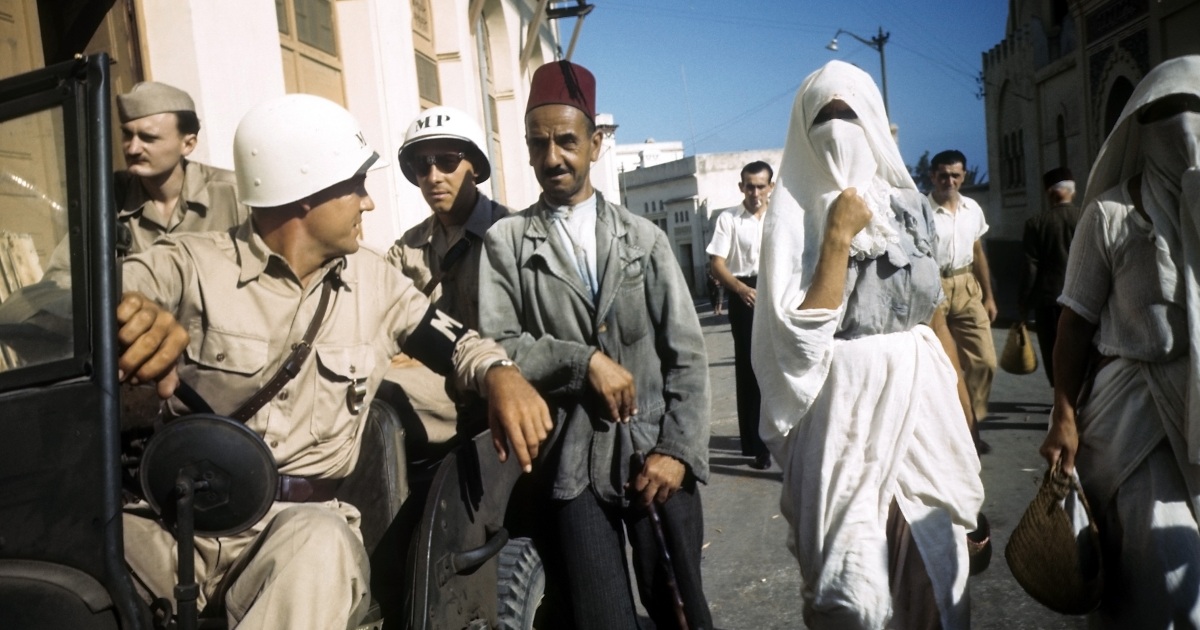 Algeria’s war for independence: 60 years on

Algerians remember the struggle to gain their freedom from French colonialism – and the example it sets for today.

Amira Toureche, a 29-year-old Algerian PhD student living in the United Kingdom, was never able to meet her grandfather.

He was killed by French colonial forces in Algeria when Toureche’s father was only six years old.

“My granddad and his brother used to have a large amount of land in Ouled Hamla,” Toureche told Al Jazeera, referring to a town in northeast Algeria. “They used this large farm to help the Algerian independence fighters hide, wash their clothes and hide their weapons and belongings.”

French colonial rule in Algeria lasted 132 years, beginning in 1830 with the invasion of the capital, Algiers, and continuing until the war for independence, which concluded with the signing of the Evian Accords in March 1962.

The treaty marked the end of a bitter war. Between 1954 and 1962 up to 1.5 million Algerians are believed to have died. French forces repressed any form of resistance, particularly those fighting for independence, known as mujahideen.

“My grandad and his two brothers worked as informants, they transmitted messages to the mujahideen,” Toureche explained. French occupation forces eventually discovered the operation, which led to the arrest, and then death, of Toureche’s grandfather.

“He didn’t die on the same day he was arrested, he was tortured. But because of the brutality of the torture methods that the French soldiers used – he was hung upside down for prolonged periods with his head and body in a barrel of ice-cold water, and his lungs collapsed.”

The torture methods the French used in Algeria are well-documented, with France admitting in 2018 that it carried out systematic torture in its former colony in an attempt to crack down on the independence movement. 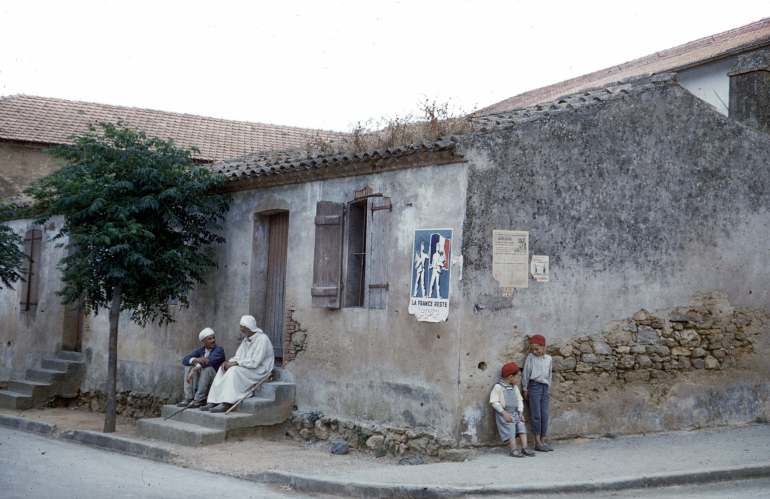 A poster in Algeria during the war of independence says ‘France stays’. The French considered Algeria to be an administrative part of France, and not a colony

Zohra Drif was one of those who fought against the French, and remembers the torture well.

“Of course, we were still human beings – and we were absolutely aware of what was at stake,” Drif explained to Al Jazeera. “We were conscious of the methods [of torture] used by the French, what they would do to stop [Algerian fighters] and how they would treat us.”

“Many of us were afraid of torture. But we were mostly afraid of not being mentally and physically strong enough to handle it,” the now 87-year-old Drif said on the phone from her home in Algiers.

France’s 2018 acknowledgement that torture was practised in Algeria marked a change in the French government’s dealings with the realities of the colonial period.

For decades, many families were lied to about what happened to their relatives during the war.

For example, the death of Ali Boumendjel, an Algerian independence fighter, was registered as suicide until 2000, when Paul Aussaresses, the former head of French intelligence during the Battle of Algiers, confessed to ordering Boumendjel’s murder and disguising it as a suicide.

During a meeting with Boumendjel’s grandchildren, in March 2021, French President Emmanuel Macron admitted that “Ali Boumendjel did not commit suicide. He was tortured and then killed.”

Despite that, Macron has said France would issue “no repentance nor apologies” for the abuses it committed against the Algerian population during the colonial period and the war for independence.

The topic has long been a taboo subject in French society, dating back to the time of the war, when the French government censored newspapers, books, and films that claimed that torture had been used against Algerians.

‘We used what we had’

Drif, considered a national hero in Algeria, was a core member of the liberation movement in Algiers.

She is perhaps best known for setting off a bomb in Milk Bar, a cafe frequented by French settlers in central Algiers, when she was only 21 years old.

Drif was dressed as a Frenchwoman to easily blend in with the crowd during the attack, which killed three people and injured dozens of others.

The incident marked a turning point in Algeria’s liberation movement.

But even in the decades that followed, Drif has at times been subject to criticism from Western scholars denouncing the use of violence against civilians. 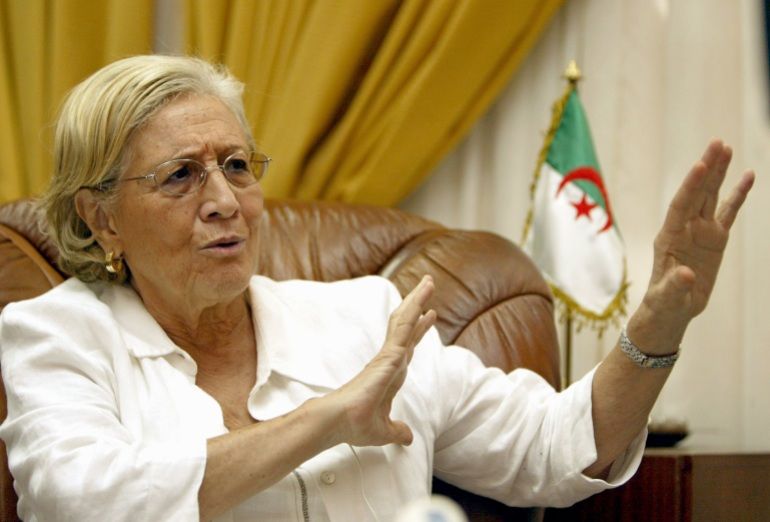 Zohra Drif is a retired lawyer and was involved in Algerian politics in the years following independence. She served on the Algerian Council of the Nation until 2016

Drif, however, still defends her methods, and says she believes there was simply no other way to fight for her country’s independence.

“We used the resources that we had. If we had warplanes and tanks, we would have simply adapted to the modern methods [of warfare],” said Drif. “It is important to remember that we were up against the most powerful forces in the world, the French army. They had all the material they needed. And all we had were our convictions, our faith, and a few revolvers.”

A year after the Milk Bar attack, Drif was captured by the French alongside Yacef Saadi, the head of the armed wing of the National Liberation Front (FLN) – which was the force that led Algeria’s resistance against the French occupation forces – in the Casbah of Algiers.

Drif was sentenced to 20 years of forced labour on charges of “terrorism”. She served five years before being released.

“Sixty years [later], I have no regrets,” Drif said. “When we were stopped by the French, it put a huge weight on us – because we were convinced that they were going to snatch our independence. We prepared [while in prison] to [continue] our combat against the French, and ensured that every fighter would be able to use their skills and educate others as well.”

Algeria has since witnessed a series of transformative events throughout its history, from the assassination of President Mohamed Boudiaf in 1992, one of the pivotal early moments of Algeria’s Civil War (1991-2002), to the outbreak of the 2019 Hirak uprising, which led to the fall of then-President Abdelaziz Bouteflika, after he had spent almost 20 years in power.

“The link between the 1954 to 1962 revolution and the Hirak is that despite having the same demands of dignity and freedom – the Hirak sought these in a more peaceful, organised manner,” said Toureche, whose research focuses on the postcolonial history of Algeria. “I believe it would have had a much greater impact had it not been for COVID-19.”

Despite leading to Bouteflika’s fall, much of the Algerian elite remain the same, meaning that for many of the masses who took to the streets in the Hirak, its goals are still unmet.

In fact, the current Algerian government, led by Abdelmadjid Tebboune, has continued to crack down on protesters, in an effort to suppress the movement.

For Drif, that means that the generations that have followed her will have to take what they can from the example of those who fought against the French 60 years ago, and work for a better future.

“Our hope – we transferred that onto our children and our grandchildren,” said Drif. “[We gave] them all the tools to take charge and do better than my own generation.”