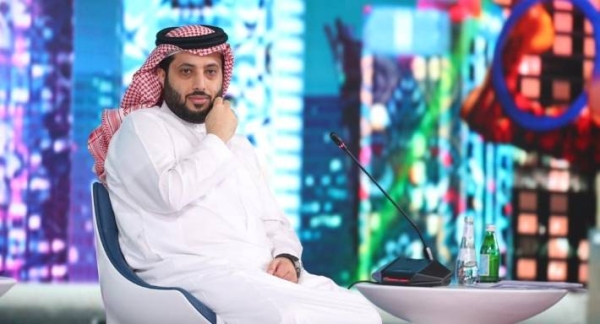 Turki Al-Sheikh, chairman of the Board of Directors of the General Entertainment Authority (GEA), announced on Wednesday that voting has begun to select the stars nominated for the second season of the Entertainment Makers Awards (Joy Awards) through the Joy Awards application available on users’ smartphones.

Joy Awards 2022 is the largest ceremony to recognize and honor artistic achievements of the Arab world, featuring 13 awards that will be handed to nominated female and male celebrities across various genres and categories. The Joy Awards — part of Riyadh Season — is hosted by the GEA, in line with the goals of Saudi Vision 2030. It is billed as the largest celebration of entertainment creators in the Arab world.

The Joy Awards is one of the most prestigious Arab awards, presented by the GEA, and represents public recognition of excellence in artistic and sports achievements and areas of influence.

The Joy Awards are given away to those who deserve it based on the opinion of the public alone, which has made it of great importance to various segments of society who can vote for their favorite artist or player without any other criteria, identified by judges.

The award represents an added value for the stars who view it as an Arab version of the international Oscar, which is contested by art masters in acting and techniques contributing to the film industry in the largest international studios.

The nominations of the distinguished entertainment industry star in the fields of art, cinema, drama, music, and sports depend on the public’s vote through the application for the awards ceremony, and the selection of the preferred artist in the fields of series, music, films, sports, and social networking sites, where he wins for each category with the highest percentage of voting.

The Entertainment Makers Awards are distinguished by collecting the brightest stars and celebrities within the activities of the Riyadh Season, and awarding their prizes to the most prominent artists and social influencers, which contributed to attracting the attention of those interested in international awards from the artistic, sports, media and social circles.

Among the most prominent awards offered by the Joy Awards are the Honorary Entertainers Award, Personality of the Year Award, and Lifetime Achievement Award, in addition to the awards for the favorite actors, athletes, and influencers of the award’s audience inside and outside the Kingdom.

When the public participates in voting in the Joy Awards application, they will be entered into a draw for two tickets to attend the Entertainment Makers Awards ceremony in Riyadh City Boulevard, in an event that is considered one of the largest events of the Riyadh Season 2022.

The Joy Awards, which is dedicated to entertainment makers, finds great importance for different social and age groups, as it is broadcast on a number of channels and platforms that document the celebration of the stars and their moments of progress to the podium, as well as their impressions and reactions after being nominated by their fans who delivered them by voting to the ceremony, which is considered as the largest of its kind in the region.

The public can download the application and participate in the selection of candidates via the link: https://apps.apple.com/sa/app