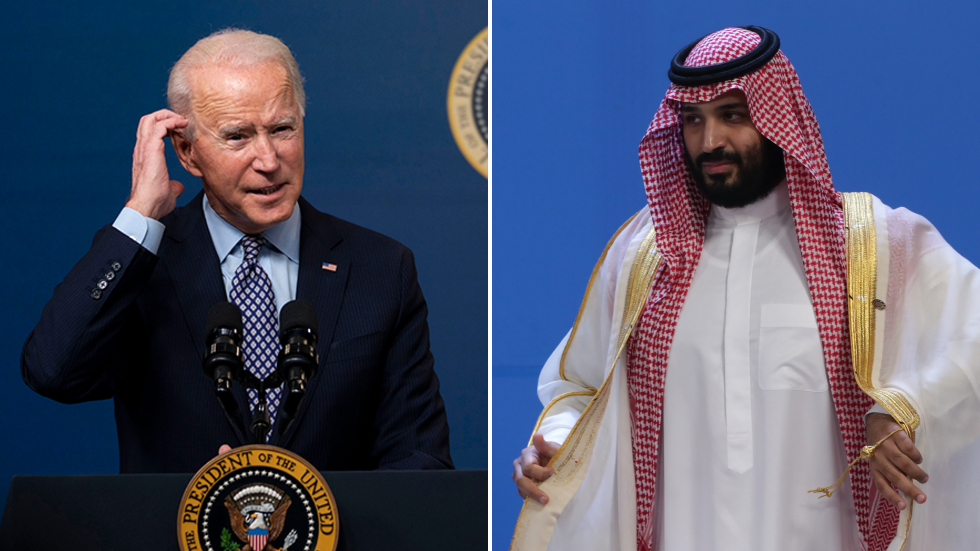 He is no friend of Joe Biden. This is awkward.

Because higher oil prices are boosting inflation and undermining Biden’s approval ratings, the White House is trying to bully OPEC producers into pumping more oil, even as they do their level best to squash domestic output. National Security Advisor Jake Sullivan criticized the leading oil-producing nations, saying their production was “simply not enough.”

Biden later chimed in, stating, “We also made clear to OPEC… that the production cuts made during the pandemic should be reversed as…the global economy recovers, in order to lower the prices for consumers.”

Unhappily for Biden, and for American consumers, OPEC – and especially MBS – may not heed his call.

Early in Biden’s presidency, the White House announced that Biden would not speak to MBS, but would only communicate with his father, the ailing Saudi King Salman bin Abdulaziz. Then Biden released an intelligence assessment that the crown prince was responsible for the murder of journalist Jamal Khashoggi.

This antagonism apparently did not sit well with the crown prince, who soon thereafter unexpectedly squashed an anticipated production hike from fellow OPEC members, causing oil prices to jump 4 percent. His message to Biden was clear: mess with Saudi Arabia and expect no help taming the price of oil.

Saudi Arabia is not the only nation that might resist Biden’s pleas. The UAE, in the vanguard of establishing normalized relations with Israel as part of the Trump administration’s extraordinary Abraham Accords, found its promised weapons purchases axed by the Biden team. Other efforts to undermine the breakthrough Middle East peace effort followed, alienating the Gulf nations that are the backbone of OPEC.

As a result, Biden’s cry for help may go unanswered. White House Press Sec. Jen Psaki acknowledged as much in a press conference, arguing that the White House was looking to create a “long-term engagement” with OPEC, not a quick resolution. Sure.

To be fair, asking for OPEC’s help was not the president’s only proposed “fix” for higher oil prices. He also said he has asked “the Chair of the Federal Trade Commission to use every available tool to monitor the U.S. gasoline market and address any illegal conduct…”

Here’s a better idea for Biden: Instead of blaming OPEC, or suggesting that U.S. oil companies are somehow cheating consumers, how about continuing the policies that in recent years have led to a startling increase in domestic production and subsequent decline in our reliance on OPEC oil?

Last year, the U.S. actually exported more oil and refined products than it imported for the first time since at least 1950. That is an extraordinary turnaround from the late 1970s, when OPEC contributed 85 percent of crude oil imports which, in turn, supplied 45 percent of our consumption.

Rather than working with the industry to boost production, the Biden administration is apparently planning to impose new rules that will curb oil U.S. output, like limiting federal leases in key areas, increasing the royalties that producers must pay and hiking costly bonding requirements. These changes will only give OPEC more clout and drive prices higher.

Here’s another suggestion for Biden: How about reining in your administration’s utterly reckless spending, which will clearly spur higher prices?

Inflation is not limited to higher gasoline prices, though the 41 percent increase from last year is certainly hurting consumers. Overall consumer prices increased 5.4 percent in July compared to the year before, the same rate as in June and the highest 12-month rate since 2008.

A more recent report showed producer price increases jumping one percent in July, almost double the expected rate. The increase in wholesale prices over the past 12 months was 7.8 percent, the highest since the 1980s. Those higher costs being paid by producers will be passed along to consumers in coming months, undermining the White House pitch that inflation will be short-lived.

Meanwhile, a worrisome report from the New York Federal Reserve found that consumer expectations about inflation rose to an eight-year high last month; respondents to the survey anticipate inflation of nearly 4 percent three years out, while price hikes over the next 12 months were expected to be 4.8 percent, a record.

Consumers may be getting used to rising prices, but that doesn’t mean they like them. In a recent CNBC All-America Economic survey, only 42 percent of respondents gave the president a thumbs-up on the economy, down four points from April. Worse, only 22 percent were optimistic about the economy.

Americans are anxious about inflation. It’s simple: Too much money is chasing too few goods. Democrats’ proposed $3.5 trillion “infrastructure” budget package, which they want to push through with zero GOP votes, will only make matters worse, adding fuel to the raging economy.

The Biden White House is in trouble and is looking in the wrong places for solutions. Blaming OPEC will not bring prices down, or calm voters’ fears.
#joe biden  #jamal khashoggi
Add Comment